Key indicators that January 6 was an attempted coup d’état

The history of modern political era coups and coup plots provides a great deal of insight in forming a conclusion that what occurred at the U.S. Capitol on January 6 was no mere “riot” or protest “gone wild.” Recent disclosures in federal charging documents of insurrection participants and leaders, as well as the feeble attempt by the Capitol’s three top law enforcement officials—who either resigned or were fired after the mêlée—to blame others for the lack of security all point to a coordinated operation involving the Trump White House, the political leadership of the Pentagon, far right extremist groups, and last, but not least, GOP congressional insiders, including senators and U.S. representatives and their staffs.

It can also be ascertained what sort of post-constitutional government Donald Trump and his collaborators planned to form after eliminating the legislative branch of the federal government as a threat.

What is being largely missed by the corporate media is the fact that former and, reportedly, current Trump political adviser Steve Bannon is in league with far-right fascist parties around the world that seek to oust existing democratic governments and replace them with far-right regimes. Bannon’s efforts are being financially supported by Rebekah Mercer, the deep-pocketed billionaire daughter of hedge fund mogul and major alt-right media financier Robert Mercer; exiled Chinese billionaire and would-be fascist warlord of a post-Communist Chinese state, Guo Wengui; and right-wing anti-Pope Francis elements of the fascist Roman Catholic order Opus Dei.

Trump collaborator, former Defense Intelligence Agency (DIA) chief and retired U.S. Army Lieutenant General Michael Flynn, and his brother, the then-deputy chief of staff for the Joint Chiefs of Staff, Lieutenant General Charles Flynn, are knowledgeable about coups, since they have both interfaced with pro-U.S. military coup leaders in other countries during their respective careers. In fact, the DIA largely supplanted the Central Intelligence Agency in monitoring coups and coup plots in Africa during the George W. Bush administration.

Had the coup succeeded in taking over the Congress and assassinating Vice President Mike Pence (and capturing the nuclear code satchel (“the football”), Vice President-elect Kamala Harris, House Speaker Nancy Pelosi, the Senate Republican and Democratic leadership, and, at the very least, the Democratic House leadership, a majority of surviving House Republicans, all pro-Trump, could have easily rejected the electoral votes of the states that put Joe Biden over the top and declared Donald Trump a second term president. It should be remembered that on December 1 of last year Michael Flynn called for the military to seize control of certain state governments and re-run elections in those states Trump was contesting: Arizona, Georgia, Pennsylvania, Wisconsin, and Michigan.

Flynn’s answer to the expected mass protests against such action was a Trump declaration of martial law. Flynn’s attorney at the time of his comments was the “release-the-kraken” conspiracy kook Sidney Powell. Powell was in cahoots with Georgia’s violence-prone election attorney Lin Wood and Georgia’s latest unhinged addition to the Republican House caucus, Marjorie Taylor Greene. These names, including Flynn and likely his brother, are only important because they, and others, would have held major positions in a post-constitutional Trump regime if the template for coups in Africa and, to a lesser extent, Latin America was followed. On November 26, 2020, Trump issued Flynn, a federally-convicted felon, a full and unconditional pardon for his crimes.

The Trump planned coup appears to have been a political-military hybrid coup. Key members of the military, including Charles Flynn, acting Secretary of Defense Christopher Miller, were involved in preventing a rapid deployment of DC and Maryland National Guard forces to the Capitol to secure it during the initial stages of the Trump siege. Trump appointed Miller as acting Defense Secretary to replace Mark Esper, who was fired by Trump immediately after the 2020 election. Miller’s last active duty position was as director for Special Operations and Irregular Warfare in the Office of the Assistant Secretary of Defense for Special Operations/Low-Intensity Conflict & Interdependent Capabilities. The coup plotters used “irregular warfare” tactics in taking over the U.S. Capitol with the intention of halting the certification of the electoral votes for Biden.

It is also clear that the insurrectionists were under orders to kill as many Democrats and anti-Trump Republicans as possible with key immediate goals. These include ensuring a lopsided vote by surviving pro-Trump Republicans to reject Biden’s electoral vote count and certify Trump as re-elected with 232 electoral GOP-certified votes. In having an overwhelming majority in the surviving Congress, Trump would essentially have enjoyed what is known in Westminster-style democracies as a “rump parliament.” The Republican Party would have become a de facto personal contrivance for Trump, much as political parties are used by African dictators and the military junta in Burma as convenient democratic fig leafs.

As DIA director and Joint Chiefs staff member, Michael and Charles Flynn, respectively, would have had access to DIA highly-classified U.S. Defense Attaché reports on the mechanics of coups and attempted coups in Africa and elsewhere. The intelligence sources for these reports would have included private information from the coup leaders themselves, many of whom having attended U.S. military command and staff colleges in Pennsylvania, Kansas, Arizona, and Virginia.

Both Flynns would have realized that having an unbeatable majority in the U.S. legislature, Senate and House, would have been required to give Trump’s coup an air of “legitimacy.” After all, since the U.S. has never had a successful full-blown extra-constitutional coup, case studies from abroad would have had to have been relied upon by the Flynns and the other plotters. African presidents with less-than-stellar democratic credentials have employed this tactic with respect to their own “rump parliaments.” These leaders not only have overwhelming majorities conducted after tainted elections but they appoint “independents” to further boost their parliamentary margins. With opposition parties splintered and compromised by the ruling regimes, parliamentary seat vacancies are also not uncommon in these rump parliaments, particularly after opposition members are either arrested or their parties banned. The following table represents the degrees of political control these dictators and quasi-dictators have over their rubber stamp parliaments where their “vanity” political parties have complete control: 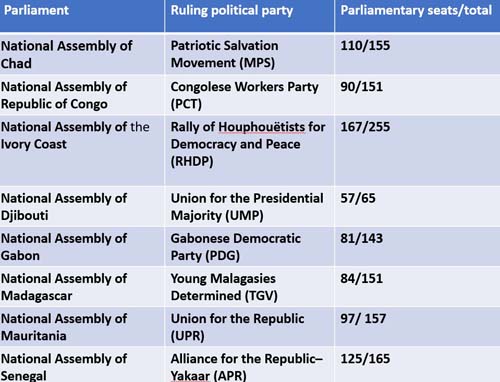 Another key factor in the attempted 1/6 Trump coup was to establish the Republican Party as a fascist party. Trump and his supporters continue to have a real problem with the acronym “antifa,” which stands for “anti-fascist.” The chief ideologists of the Trump movement, including Bannon and Roger Stone, see “antifa” as not an actual physical threat—it is not—but a threat against their national and global fascist political movement.

The coup plotters had inside assistance from the police. This is another key aspect of coup planning. Law enforcement officialdom has to be relied upon so they pose as little hindrance to the coup logistics as possible. For example, how could a quite functional gallows have been transported through downtown Washington on January 6 without it being noticed by the Metropolitan Police, Secret Service, U.S. Park Police or any number of law enforcement agencies present in the nation’s capital? The answer is several “winks and nods” from local police, as well as Homeland Security agencies like the Secret Service. In 2010, what began as a protest by striking police officers in Ecuador turned into a full-fledged coup attempt against President Rafael Correra. The president had to be rescued by the military before he was assassinated by the police. The classified DIA action and post-action reports on the “police coup” in Ecuador would have been available to the Brothers Flynn.

The corporate media continues to refer to 1/6 as a “riot.” It is increasingly clear that from a military and intelligence view, the January 6 insurrection was a failed attempt at a coup d’état, what would have been a bloody one that would have stunned the nation during the parallel dilemma of a pandemic.