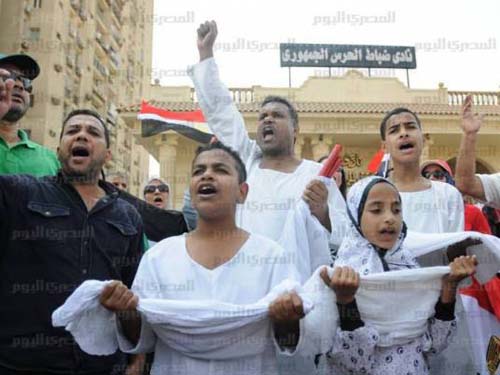 Like children everywhere, they shriek with pleasure on carousel rides, float in dinghies around a rubber swimming pool and stretch their hands out for balloons perched on the shoulders of adoring adults. The scenes could be taken for picture perfect snapshots of parents and children spending quality time as a family. But underneath the jollity are sinister undertones.

Those innocent babes are being ruthlessly used as human shields either to deter the authorities from forcibly breaking-up the protest that has endured for over 40 days or, in the increasingly likely event of that happening, to be sacrificial lambs whose bodies will be splashed on the front pages of international newspapers to discredit the interim government while bolstering the Brotherhood’s contrived victimization.

I have every reason to be cynical when an Al Jazeera reporter, covering the festivities, revealed that the Brotherhood leadership has ordered its followers to bring their wives and children to the sit-in when plans have been firmed up to dismantle it. When she asked parents whether they feared for their kids’ lives, they invariably said they were willing to sacrifice their children for the sake of “democracy” and “freedom.”

There is not one scrap of nobility in those sentiments when we don’t own our children. They’re not our possessions; we are duty bound to keep them safe until they branch out on their own.

But worse still, local Egyptian networks have aired videos and first-hand reports confirming that the Brotherhood’s minions have lured street children to Rabaa with new clothes and the promise of regular meals, while others have been transported from orphanages in minibuses.

It’s bad enough that those youngsters have been forced to camp out in searing heat, encouraged to chant martyrdom slogans they don’t understand and to march bearing their own death shrouds. The older ones have been indoctrinated to hate; those who have witnessed beatings and torture, evidenced by a report from Amnesty International, will have been scarred for life. Rabaa, with its black Al-Qaeda flags, weapons protruding from windows and use of indoctrination techniques, reminiscent of those used by Jim Jones in Guyana to brainwash 918 of his following to commit suicide in 1978, has morphed from a protest into a terrorist incubator.

Interim President Adly Mansour closed the door on foreign mediation following hostile remarks from visiting U.S. Senators John McCain and Lindsey Graham, who were told in no uncertain terms they were no longer welcome. Subsequently, it was announced that the pro-Mursi sit-ins are not only illegal but represent a threat to national security.

Egyptians are now bracing themselves for the inevitable and with extremely heavy hearts acknowledge that a minority sect, willfully clothing a political contretemps in the garb of a religion, cannot be permitted to hold an entire nation hostage. Realistically, there is no country on the planet that would permit a long term occupation of its capital’s squares by armed hordes embracing jihad against their government and fellow co-religionists termed “infidels.”

The heart of the Turkish Prime Minister Recep Tayyip Erdogan may bleed for the Mursi crowd, but when environmentalists turned out to peacefully protest in Taksim and Gezi Park, they were set upon by riot police using water cannon and teargas, referred to as “looters” and “agents of foreign powers.”

You don’t have to be clairvoyant to know how the British government would react if jihadists bent on its overthrow erected their tents in Trafalgar Square, perched snipers on surrounding buildings and surrounded the area with walls and sandbags.

David Cameron is another leader who’s condemned what he calls “violence against Egyptian protestors.” Yet, when Republicans rioted in Belfast on Friday, the police used plastic bullets, water cannon and attack dogs against demonstrators who were labeled by Northern Ireland’s chief constable as mindless anarchists and thugs.

Brotherhood leaders have shown no signs that they are willing to capitulate on any of their unrealistic demands, let bygones be bygones, and participate in the clearly defined new political roadmap. On Saturday, the Grand Imam of Al Azhar, Sheikh Ahmed al-Tayyeb, reached out to the Brotherhood with an offer to chair a national reconciliation meeting. He was rudely rebuffed.

The Egyptian government’s patience isn’t limitless and, indeed, it is coming under increasing public censure for neglecting to take action as soon as tens of millions gave the army a mandate to tackle violence and terrorism. President Mansour says the state holds the Muslim Brotherhood responsible for the consequences. He’s right. The Brotherhood’s intransigence is a sign the organization looks forward to a face-off between its hypnotized following and state security forces.

They long for victims to be displayed on our screens in the hope massive casualties will turn international opinion in their favor. No doubt, the Brotherhood’s Supreme Guide and his cohorts, Mohammed al-Beltagy, Safwat el-Hegazy and Essam el-Erian, will head for their bolt holes, leaving those mesmerized crowds, including thousands of babies and children, to whatever fate has in store.

Linda S. Heard is a British specialist writer on Middle East affairs. She welcomes feedback and can be contacted by email at heardonthegrapevines@yahoo.co.uk.

One Response to Muslim Brotherhood treats children as pawns. Where’s the outcry?