What made this 9/11 different from all others

Thanks to Architects & Engineers for 9/11 Truth, another amazing feat has been accomplished. They have raised the money to create an educational campaign for the entire month of September at a scale larger than anything ever done in the movement for truth and justice for the 9/11 attacks. Just one aspect of this campaign is the below billboard in Times Square. 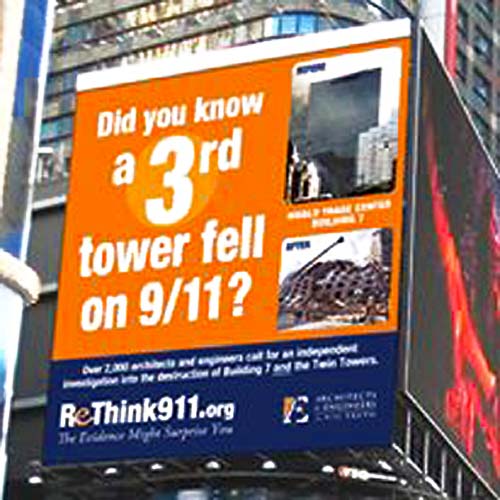 For more details, stay in touch with www.ReThink911.0rg.

ReThink911.0rg noted the recent passing of a great patriot, Col. Robert Bowman. This year’s anniversary events were dedicated to his memory. He was a man of great vision and stature, and obviously a source of courage and inspiration to all in this movement who knew him.

September 11, 2013, the 12th anniversary, was a sweltering day, with temperatures climbing into the high 90s all day, through the readings of the names at Ground Zero in the morning to the evening when the ReThink911.0rg event occurred in Times Square.

At 5:20 P.M., a small stage with a ReThink911.0rg backdrop was set up at 47th Street and the east side of 7th Avenue, along with 50 or so seats. A metal divider was stretched halfway down the long side street toward Sixth Avenue.

The soundman had set up an ear-shattering set of speakers cranking out some heavy metal rock. In this chorus of sound were added the sirens of fire engines, ambulances, the beeping traffic, and the sounds of the dense crowds and traffic that passed the stage.

Visually, the ReThink 9/11 billboard stood out and stopped many passing by in their tracks, including several tour buses and camera-buff tourists, to take pictures of it. What was this? Richard Gage, the architect of this event, along with Les Jamieson who introduced the guest speakers, within no time, had drawn a crowd on our side of the street.

Beyond that, the magic of digital signs flashed every color in the rainbow from every direction like some fantasy world of consumerism. The heat was relentless like the flow of the crowds. The policemen assigned to keep the north side of the street sidewalks clear did a yeoman’s job politely asking people not to block passage. Gage and company had already been to CBS, NBC, ABC and Fox, including the New York Times, and other networks asking for coverage, but were not surprisingly rebuffed. Fox did have a running electric sign, albeit somewhat twisting what the event was.

Ironically, we were about two blocks north of where Faisal Shahzad had parked his Nissan Pathfinder “car bomb” several years ago, but forgot to put a blasting cap on his “bomb.” So they only smoked when the timer went off. Still it had created havoc. But that’s a whole other story.

This was the first time I saw military figures present in our group. Sergeant John Natale of the Marines was there in a cammo uniform with a chest of metals, and was taping the event, and at some point spoke of the disaffection of troops to the endless wars and deaths of soldiers and how consciousness of the truth about “9/11 being an inside job” to perpetuate these wars was rising. Sergeant Natale was retired and held three degrees in engineering and two in business. The last two were to accommodate his time in Kuwait, which he described as a half-military, half-business venture.

Richard Gage [in a studio version] gave a summary of the thousands of Architects and Engineers now part of AE911, about how their numbers had risen, and how they were all in agreement that Building 7, the one that wasn’t hit by a plane, went down in less than 7 seconds as the result of a preplanned internal demolition. That stopped a wad of pedestrians and turned heads. He also suggested that explosives coated with nanothermite within Towers 1 and 2, had assisted in bringing them down. I thought of those family members that morning tearfully reciting the names of their lost ones so innocently, most without a clue of the perfidy behind 9/11’s inside job. Unfortunately, I was unable to work my way through the crowd where copies of Gage’s new DVD were available.

Former Congresswoman Cynthia McKinney brought the now nearly block long crowd to rapt attention. Interestingly, she spoke about this administration’s persistent efforts to ignite Syria into the ongoing pattern of wars 9/11 has triggered. She spoke of meeting General Wesley Clark who told her, “I just got this memo from the Secretary of Defense’s office. It says we’re going to attack and destroy the governments in 7 countries in five years—we’re going to start with Iraq, and then we’re going to move to Syria, Lebanon, Libya, Somalia, Sudan and Iran.”

McKinney also reported that Clark said, “They wanted us to destabilize the Middle East, turn it upside down, make it under our control.” He then recounted a conversation he had had ten years earlier with Paul Wolfowitz—back in 1991—in which the then-number three Pentagon official, after criticizing Bush 41 for not toppling Saddam, told Clark: “But one thing we did learn [from the Persian Gulf War] is that we can use our military in the region—in the Middle East—and the Soviets won’t stop us. And we’ve got about 5 or 10 years to clean up those old Soviet regimes—Syria, Iran, Iraq—before the next great superpower comes on to challenge us.”

Clark told her he was shocked by Wolfowitz’s desires because, as Clark put it: “the purpose of the military is to start wars and change governments? It’s not to deter conflicts?” This cast a whole new light on the frenetic efforts of Obama’s endless efforts to start a war with Syria. He was just following in Bush’s footsteps.

Beyond that, McKinney mentioned Israel’s nefarious plan, A clean Break: A New Strategy for Securing the Realm.

The “Following is a report prepared by The Institute for Advanced Strategic and Political Studies’ “Study Group on a New Israeli Strategy Toward 2000. The main substantive ideas in this paper emerge from a discussion in which prominent opinion makers, including Richard Perle, James Colbert, Charles Fairbanks, Jr., Douglas Feith, Robert Loewenberg, David Wurmser, and Meyrav Wurmser participated. The report, entitled “A Clean Break: A New Strategy for Securing the Realm,” is the framework for a series of follow-up reports on strategy”

This morning I found the linked 10-page article on the plan. Here a few paragraphs that will give an idea of it.

“Israel has a large problem. Labor Zionism, which for 70 years has dominated the Zionist movement, has generated a stalled and shackled economy. Efforts to salvage Israel’s socialist institutions—which include pursuing supranational over national sovereignty and pursuing a peace process that embraces the slogan, ‘New Middle East’—undermine the legitimacy of the nation and lead Israel into strategic paralysis and the previous government’s ‘peace process.’

“That peace process obscured the evidence of eroding national critical mass—including a palpable sense of national exhaustion—and forfeited strategic initiative. The loss of national critical mass was illustrated best by Israel’s efforts to draw in the United States to sell unpopular policies domestically, to agree to negotiate sovereignty over its capital, and to respond with resignation to a spate of terror so intense and tragic that it deterred Israelis from engaging in normal daily functions, such as commuting to work in buses.

“Benjamin Netanyahu’s government comes in with a new set of ideas. While there are those who will counsel continuity, Israel has the opportunity to make a clean break; it can forge a peace process and strategy based on an entirely new intellectual foundation, one that restores strategic initiative and provides the nation the room to engage every possible energy on rebuilding Zionism, the starting point of which must be economic reform. To secure the nation’s streets and borders in the immediate future, Israel can . . .”

Mind you, Ms. McKinney was discussing these plans with her powerful voice over a microphone on 47th Street and Seventh Avenue. This wasn’t your ordinary 9/11 activist meeting. After outlining the plan (in much less than ten pages) she received a large round of applause for her due diligence in reporting this.

She said, “Here was a plan described as ‘Sociocide,’ breaking down entire countries, destroying entire societies, which, once broken, would take perhaps 15 years to reorganize.”

This stunned even the war-wise 9/11 truthers, including myself.

The last major guest was Dr. William Pepper, who spoke of his most notable book, Act of State: The Assassination of Martin Luther King. Pepper worked on the book for years, till he finally got the C.I.A. to admit that Army snipers and local sharp-shooters were responsible for the King’s assassination in Memphis. An award of $1 from the U.S. government was made to the family (just to prove the point). Pepper talked about all the threats he received while writing the book. When his children were threatened he moved to Oxford to continue his work, taking his children with him.

He also spoke about a book he’s now working on about Sirhan Sirhan, the purported assassin of Bobby Kennedy. He received a large round of applause from the gathered crowd for mentioning that. Obviously, many don’t believe that bit of baloney, either.

All through the several hours of speakers, I was sitting next a retired Navy man of 30 years and his wife, who appeared to be about four or five months pregnant. Coincidentally, his family was from Sicily, mine from Naples; we were both left-handed. And my son has just been accepted for the Navy. He, too, spoke of the developing awareness of servicemen concerning 9/11. He said when he studied the photos of the Towers and the level of destruction he was convinced it was explosions that had taken all three towers down. The lights went on for him.

Since I had arrived early, by then the heat, the noise, the shock of the insights presented, and the ever-flashing lights and crowds had gotten to me. I was tired. I shook the Navy man’s hand and his wife’s, wished them good luck, and headed back to the subway. Fortunately, a train came quickly, and I was home in about 15 minutes. My wife had ordered dinner and I began to relate what a unique experience it all had been.

To Richard, Les, and all those who worked on this event, you did a ground-breaking job.

Jerry Mazza is a freelance writer and life-long resident of New York City. An EBook version of his book of poems “State Of Shock,” on 9/11 and its after effects is now available at Amazon.com and Barnesandnoble.com. He has also written hundreds of articles on politics and government as Associate Editor of Intrepid Report (formerly Online Journal). Reach him at gvmaz@verizon.net.