Canadian natives resist: ‘What the frack?’ 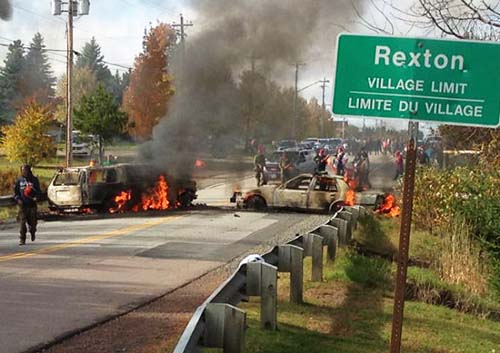 Last week’s anti-fracking protest has put Canada’s First Nations at the forefront of Canada’s political life, injecting spirit back into our moribund political scene. Canadians watching the evening news were shocked by scenes of burning police cars, and riot squad of 100 police wielding tear gas and tasers on horseback.

Demonstrations to protest shale gas exploration on native lands near Rexton, New Brunswick, had been mounting for months, and when the RCMP moved in to take down the Mikmaq Elsipogtog tribe’s barriers, it was hardly surprising that the standoff became violent, starting with demonstrators throwing rocks, bottles and paint, and, when Chief Arren Sock was arrested, setting fire to six police cars. At least 40 people were arrested last Thursday for violating a court-order injunction and disturbing the peace.

Fracking is a method of gas extraction where water is mixed with sand and chemicals and injected at high pressure into a wellbore to create small fractures, yielding natural gas and petroleum. In the process, it pollutes ground water, which now bears toxic chemicals and dangerously high levels of radiation, as well as emitting foul odors. The local Mikmaq claim that the Canadian subsidiary of the American frackers, Southwest Energy (SWN), is operating illegally on tribal land, and activists began blocking the highway between Rexton and Sainte-Anne-de-Kent on 28 September. SWN used its muscle and money to get a court injunction evicting the protestors.

But SWN’s irresistible force had met an immovable object. Speaking on “Columbus Day” on 12 October, “a day which celebrates 521 years of genocide and oppression of Indigenous peoples,” Mikmaq Warrior Society activist Suzane Patles declared 18 October to be a day of protest against the court injunction, calling for other native groups across the country to raise their banners in solidarity. Renaming Columbus Day “Treaty Day,” Chief Sock presented a Band Council Resolution stating that his community is prepared to reclaim all unoccupied Crown Lands in Signigtog District (New Brunswick), stating, “Prime Minister Harper and the Canadian government have washed their hands with regards to the environmental protection of our lands and waters.” Chief Sock issued his own eviction notice, warning the oil and gas company to leave native land.

The RCMP claimed that at least one shot was fired “by someone other than an officer,” recalling past escalations between police and natives. In 1990, the Mohawks blockaded a bridge in Oka, Quebec, to protest the building of a golf course on native lands. That standoff also involved armed resistance resulting in the death of a Quebec policeman, and became a national crisis. Conservative Prime Minister Brian Mulroney ordered the mobilization of 2,500 Canadian troops. The courage of the Oka Mohawks inspired First Nations protests across Canada and forced the government to ‘buy back’ the land from the municipality (land which was never theirs in the first place) and prevent any further development.

Another now legendary standoff was at Ipperwash Provincial Park in Ontario in 1995, over the confiscation of a sacred Ojibwa burial ground in 1942 to use as a firing range for the Canadian Army. The natives had been camping on the firing range since 1993 to stop the desecration of their ancestors, and warned in the spring of 1995 that they would occupy the park if nothing was done. Nothing was done—by another Conservative leader, Ontario Premier Mike Harris—and when the tourists packed up on Labour Day and the natives moved in, Harris ordered a police sniper team to get “the fucking Indians out of my park.” This led to the shooting and death of one of the leaders, Dudley George (and a suspended two-year sentence for the sniper). Finally, in 2009, 65 years after it was stolen, the land was returned by the government, just as in Oka, and as will surely happen in New Brunswick.

The legacy of the latest corporate insanity—fracking—will last for generations, poisoning ground water, destroying wildlife and making vast tracks of land uninhabitable, speeding up global warming—all for the sake of burning ever-increasing amounts of energy. Instead of opposition party leaders join the Mikmaqs on the barricades in protest, Canadians are left with the impression that natives are violently violating the ‘law.’ But whose ‘law’?

Since Stephen Harper came to power at the head of the Conservative Party in 2006, he has been busy dismantling laws that virtually all that Canadians hold dear, with no effective opposition from the Liberals or New Democrats. His legacy includes withdrawal from the Kyoto Protocols, twice proroguing parliament and stifling freedom of speech, and electoral fraud (“robocalls”).

His government has been notable for its refusal to try to resolve simmering treaty disputes with Canada’s First Nations. Instead, in 2008, he signed a ‘treaty’—a public security cooperation “partnership”—with Israel, a country which, like Canada, violates its treaty obligations with its own native Palestinians. The Conservatives’ Bills C-38 and C-45 were blatant attempts to replace the government’s treaty obligations with market mechanisms, spelling the death knell of its obligations to First Nations.

Saskatchewan native women began a hunger strike in protest last November, which Ontario Attawapiskat Chief Theresa Spence brought to national attention with her own hunger strike near Ottawa’s Parliament Hill in December. Their actions gave rise to Idle No More, a pan-Canadian native organization that has attracted support from Canadians of all stripes.

In this latest standoff, as the police cars burned, Chief Sock was released and spirited to a 3-hour meeting with New Brunswick Premier David Alward. Sock called for a 30-day moratorium to allow tempers to cool and for reflection. The blockade of highway 11 continues, and native activists from across Canada are joining the Mikmaq in solidarity. Meanwhile, demonstrations broke out in cities across Canada, including Halifax, Montreal, Ottawa and Thunder Bay, as well as in New York and at the Canadian Embassy in Washington, DC.

This principled action by New Brunswick natives is being echoed in dozens of other campaigns by native communities across Canada, where natives are stubbornly refusing to be swallowed up by corporate Canada. Even more appalling than fracking—if that’s possible—are the Alberta tar sands, Canada’s largest source of greenhouse gases, arguably the most environmentally destructive undertaking in history. And the construction of the necessary pipelines to bring the toxic sludge to happy consumers across North America and beyond. All enthusiastically promoted by the Harper government.

Demonstrations against the tar sands are going on this very minute across Canada and the US, with natives in the forefront. The “No Line 9!” campaign to stop a pipeline between Sarnia and Montreal, passing through 18 First Nation communities, held a protest at the National Energy Board in Toronto 19 October, even as the Alberta government declared a state of emergency and evacuated residents when 13 rail cars carrying crude oil and liquefied gas exploded and leaked their poison, as if to prove the demonstrators’ point.

In Saugeen Shores, Ojibwa First Nation Chief Randall Kahgee refuses to be railroaded into approving a plan by Ontario Power Generation to turn the Bruce Peninsula, a World Biosphere designated area, into a nuclear waste dump. The Saugeen First Nation chief told the Joint Review Panel: “Those generations yet to come, they’re going to want to know, what did our ancestors do to make sure we still have our relationship to those lands and those waters.”

Northern Ontario natives are now being pressured by both Harper and ‘advised’ by former Liberal and NDP leader Bob Rae to open their fragile sub-Arctic territories to chromite mining and smelting projects in the James Bay ‘ring of fire.’ What does Rae think of the Mikmaqs’ refusal to allow fracking on their lands? The tar sands? The nuclear waste dump in Bruce County? Will Rae convince his tribal friends to cede the rights to their fragile sub-Arctic lands for a few hundred million dollars?

There is ample evidence that fracking is disastrous. River water in western Pennsylvania has radium levels 200 times higher than normal downstream from a gas treatment plant, according to a Duke University study. The toxic tar sands project has prompted Europe to threaten to boycott Canadian oil. Nuclear waste will continue to ‘give’ for tens of thousands of years.

For the first time in Canadian history—from the native point of view, a history of occupation, dispossession and manic economic development—the Mikmaqs of New Brunswick and their allies across Canada in Idle No More are putting the option of “No!” on the table, not just “How much money will we get to let the corporations destroy our land?” “Treaty Day” replaces Columbus Day on my calendar, and I hope, will someday be celebrated as an official Canadian holiday.

Eric Walberg is author of “Postmodern Imperialism: Geopolitics and the Great Games.” You can reach him at ericwalberg.com.

This entry was posted in Energy, Environment, Special Reports. Bookmark the permalink.