A meat additive few Americans realize they are eating

If you eat commercial US beef, pork or turkey, it was probably grown with ractopamine 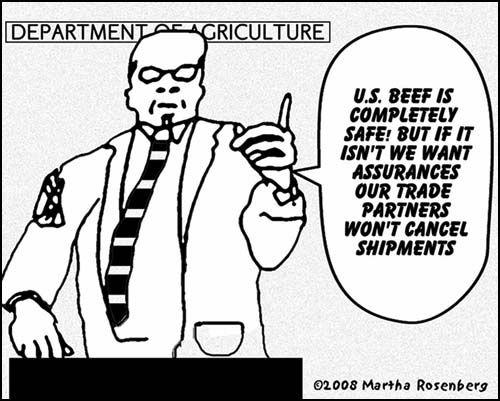 Have you ever heard of ractopamine? Neither have most US food consumers though it is used in 80 percent of US pig and cattle operations. The asthma drug-like growth additive, called a beta-agonist, has enjoyed stealth use in the US food supply for a decade despite being widely banned overseas. It is marketed as Paylean for pigs, Optaflexx for cattle and Topmax for turkeys.

This month, the Center for Food Safety (CFS) and Animal Legal Defense Fund (ALDF) have sued the FDA for withholding records pertaining to ractopamine’s safety. According to the lawsuit, in response to the groups’ requests for information “documenting, analyzing, or otherwise discussing the physiological, psychological, and/or behavioral effects” of ractopamine, the FDA has only produced 464 pages out of 100,000 pages that exist. Worse, all 464 pages have already been released as part of a reporter’s FOIA. Thanks for nothing.

CFS and ALDF have spent over 18 months meeting with the FDA and seeking information about the effects of ractopamine on “target animal or human liver form and function, kidney form and function, thyroid form and function” as well as urethral and prostate effects and “tumor development.” The lawsuit says the CFS has “exhausted administrative remedies” and that the FDA has “unlawfully withheld” the materials.

Ractopamine’s effects on animals are documented, say the groups, but effects on humans remain a mystery. Codex, the UN food standards body, established ractopamine safety residues on the basis of only one human study of six people and one subject dropped out because of adverse effects! “Data from the European Food Safety Authority indicates that ractopamine causes elevated heart rates and heart-pounding sensations in humans,” says CFS.

Two cousin drugs of ractopamine, clenbuterol and zilpaterol, cause such adrenalin effects in humans they are banned by the Olympics. Cyclist Alberto Contador failed a Tour de France anti-doping test in 2010 for levels of clenbuterol which he said he got from eating meat. Clenbuterol has been banned or restricted in meat after human toxicities. “The use of highly active beta-agonists as growth promoters is not appropriate because of the potential hazard for human and animal health,” wrote the journal Talanta.

Certainly the ractopamine label puts no one at ease. “WARNING: The active ingredient in Topmax, ractopamine hydrochloride, is a beta-adrenergic agonist. Individuals with cardiovascular disease should exercise special caution to avoid exposure,” says the label for the turkey feed. “Not for use in humans. Keep out of the reach of children. The Topmax 9 formulation (Type A Medicated Article) poses a low dust potential under usual conditions of handling and mixing. When mixing and handling Topmax, use protective clothing, impervious gloves, protective eye wear, and a NIOSH-approved dust mask. Operators should wash thoroughly with soap and water after handling. If accidental eye contact occurs, immediately rinse eyes thoroughly with water. If irritation persists, seek medical attention. The material safety data sheet contains more detailed occupational safety information. To report adverse effects, access medical information, or obtain additional product information, call 1–800–428–4441.” This is used in food production?

Ractopamine is banned in the EU, Russia, China, Taiwan and many other countries. In 2007, China seized shipments of US meat and charged that frozen ribs, pig ears and sausage casing contained ractopamine. This year, when the US refused to comply with ractopamine-free certification, Russia closed its market to US beef, pork and turkey.

The US calls anti-ractopamine restrictions unscientific and unwarranted while its balking partners call the use of ractopamine unscientific and unwarranted. “China says it’s worried about the higher levels of drug residues that can be found in pig organs, which are part of a traditional Chinese diet, and Russia claims the drug could pose health risks,” reports Food Safety News.

In 2007, more than 3,500 pig farmers in Taiwan rioted because of rumor that a ractopamine ban would be lifted. Demonstrators, some carrying pigs, threw rotten eggs and dung at people and buildings chanting, “Get out, USA pork” and “We refuse to eat pork that contains poisonous ractopamine,” reported Taiwan News. After Hou Sheng-Mou, the department of health minister, assured the crowd the ban was still in place and touched a piglet, for unclear reasons, the crowd left.

Last year, the riots were repeated, replete with eggs and dung, when newly re-elected President Ma Ying-jeou reversed the 2007 assurances and proposed that the ractopamine ban be lifted with products labeled accordingly. Taiwan hog farmers fear “lifting the ban could spark widespread health concerns that would affect consumption of other meat products, undermining their livelihoods,” reported the Associated Press.

The sale of Smithfield foods to Shuanghui International this year, China’s biggest takeover of a US company, also has implications for ractopamine. Smithfield is converting its hog plants to “ractopamine-free” animals and announced that by last June its operations would be 50 percent ractopamine-free to please the Chinese markets. (Shuanghui is not guilt-free when it comes to beta-agonists—it was forced to recall its Shineway brand meat products because of clenbuterol fears.)

Why is ractopamine fed to animals? Why are antibiotics, hormones and arsenic fed to animals in the US? Ractopamine is a growth enhancer and livestock operations make more money with less feed.

Both assurances were premature. Ractopamine has caused more harm to pigs than any other drug. FDA reports link it to a startling string of conditions in cattle and pigs like respiratory disorders, hoof disorders, bloat, abnormal lameness and leg disorders, hyperactivity, stiffness, aggression, stress, recumbency (inability to get up) and death. Even the animal expert Temple Grandin has spoken out. “I’ve personally seen people overuse the drug in hogs and cattle,” she said and “the pigs were so weak they couldn’t walk.” Ractopamine causes such hoof damage, hooves have actually fallen off reports Countryside magazine—a phenomenon Grandin reports with the similar drug zilpateral (Zilmax).

And meat quality? Turkey meat produced with ractopamine has “alterations” in muscle such as a “mononuclear cell infiltrate and myofiber degeneration,” say a 2008 new drug application from Elanco, ractopamine’s manufacturer. There was “an increase in the incidence of cysts,” and differences, some “significant,” in the weight of organs like hearts, kidneys and livers. (“Enlarged hearts” had been in rats in the Canadian studies.) Happy Thanksgiving.

When a food additive no one knew they were eating comes under scientific scrutiny, Big Food and Big Pharma create an It’s Innocuous fact sheet. Meat turns brown just like an apple says a fact sheet from the American Meat Institute defending the use of carbon monoxide to keep meat red. “People would be more likely to die from a bee sting than for their antibiotic treatment to fail because of macrolide-resistant bacteria in meat or poultry,” says a brochure from the Animal Health Institute defending antibiotics in meat.

Ractopamine is similarly neutralized by the National Pork Board. It “helps pigs make the most of the food they eat [thanks, guys!] by promoting the conversion of dietary nutrients into lean muscle, which helps produce a leaner meat product” and working “in the same way that human health supplements do.”

Ractopamine is also “green” says Colleen Parr Dekker, a spokesperson for Elanco . Moving away from beta-agonists would increase corn demand and environmental impacts since the animals would need to eat more to produce the same amount of meat!

Global AgriTrends, an industry group agrees. If beef and pork producers dropped beta-agonists like ractopamine, 91 million more bushels of corn would be necessary! The green spin is reminiscent of the National Turkey Federation’s Michael Rybolt testimony that antibiotics are green on Capitol Hill. Without antibiotics, more land would be needed to grow crops to feed turkeys and more housing would be necessary because the birds could not be squeezed together, he said. There would even be “an increase in manure,” he threatened.

If the Center for Food Safety and Animal Legal Defense Fund are successful in prying 100,000 pages of safety information about ractopamine loose from the FDA, there will probably be a collective, national “yuck” sound. But meat producers may see the writing on the wall before that happens. A beef industry conference in Denver in August included a pro-and-con discussion of the drugs with a video depicting distressed cows struggling to walk shown by meat giant JBS USA. On the same day, in an apparently unrelated event, Tyson Foods Inc announced it would no longer accept cattle fed the ractopamine cousin zilpateral because of cattle that had “trouble moving after being delivered.”

Maybe ractopamine will eventually be phased out like lead in gasoline or rBGH in milk and for similar reasons. But, meanwhile, don’t count on Smithfield’s ractopamine-free initiative benefiting the US like it will China. “Americans aren’t getting the ractopamine-free pork,” Elisabeth Holmes, a staff attorney for the Center for Food Safety, revealed.

Martha Rosenberg is an investigative health reporter whose food and drug expose, “Born with a Junk Food Deficiency,” distributed by Random House, was named in the American Society of Journalists and Authors 2013 Outstanding Book Awards. A former medical copywriter and medical school lecturer, Rosenberg has appeared on CSPAN, National Public Radio, the Ed Schultz show, the Thom Hartmann show, Huffpost Live and RTV.

This entry was posted in Health, Special Reports. Bookmark the permalink.