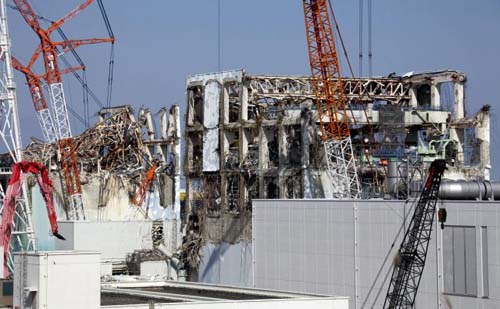 Four climate scientists have made a public statement claiming nuclear power is an answer to global warming.

Before they proceed, they should visit Fukushima, where the Tokyo Electric Power Company has moved definitively toward bringing down the some 1,300 hot fuel rods from a pool at Unit Four.

Which makes this a time of global terror.

In response, more than 150,000 petition signatures from www.nukefree.org and others will be delivered at the United Nations this Thursday, November 7, asking for a global response to this disaster.

Since March 11, 2011, fuel assemblies weighing some 400 tons, containing more than 1,500 extremely radioactive fuel rods, have been suspended 100 feet in the air above Fukushima Daiichi’s Unit Four. “If you calculate the amount of cesium 137 in the pool, the amount is equivalent to 14,000 Hiroshima atomic bombs,” says Hiroaki Koide, assistant professor at Kyoto University Research Reactor Institute. Former US Department of Energy official Robert Alvarez, an expert on fuel pool fires, calculates potential fallout from Unit Four at ten times greater than what came from Chernobyl.

Tokyo Electric Power says it may start moving these fuel rods as early as November 8. Using computerized controls, such an operation might take about 100 days. But because of the damage done to the assemblies, the fuel pool and the supporting building, the job must be coordinated manually. Tepco says it could take a year, but that requires an optimism the company’s track record doesn’t warrant.

The assemblies were pulled from Unit Four’s core for routine maintenance just prior to the disaster. When the quake and tsunami hit, the pool lost coolant.

Reactor fuel pellets are encased in long tubes made of zirconium alloy, which is extremely flammable when exposed to air.

The United Nation’s International Atomic Energy Agency has confirmed that at least some of the rods caught fire. There’s no hardened containment over the Fukushima fuel pools, so substantial quantities of radiation were spewed directly into the atmosphere.

Fully aware of its corrosive effects, Tepco had little choice but to pour in seawater. The fuel rods are almost certainly embrittled and crumbling. Random debris has been seen in the pool.

Unit Four’s structure is buckling from the quake and from an explosion possibly linked to hydrogen. The building is tipping and sinking into the sea of mud created by massive quantities of water which has been flowing down from the mountains and carrying contamination into the ocean. A typhoon has just dumped ten more inches of rain onto the site. Yet another is apparently on its way.

The site has been thankfully spared another massive quake since the big one thirty-two months ago. But should the Unit Four pool crash to the ground, or an assembly be dropped, or a fuel rod crumble or break in transit, the ensuing releases could cripple critical electronic equipment and require evacuation of all workers. Humankind could be left standing helpless, as almost happened when Tepco contemplated abandoning the site altogether as the disaster began.

There are some 11,000 fuel rods now scattered around the Fukushima site. More than 6,000 sit in a pool just 50 meters from the base of Unit Four.

The exact location and status of the melted cores from Units One, Two and Three remain uncertain. Millions of tons of water have been poured into their proximate location to keep them cool. Much of that contaminated water is being stored in more than a thousand leaky tanks that could not withstand a strong earthquake.

But nothing short of a full-on global presence will do. The bring-down of the fuel rods from Unit Four is a terrifying unknown. There’s no precedent for an operation of this scope, precision or potential fallout.

At the very least it demands fullest possible attention from all the world’s best scientists and engineers. The global media must power through the Abe administration’s crack-down on the flow of information. And we must all direct our full awareness to what is about to happen at Fukushima.

Unfortunately, it’s no exaggeration to say that our survival may depend on it.

It’s also clear that before anyone advocates MORE nuclear power, they should take a good long look at what’s going at Fukushima. And if they are claiming atomic expertise, maybe they should jump in to help.

Harvey Wasserman’s Solartopia Green Power & Wellness Show is at progressiveradionetwork.com, and he edits nukefree.org. Harvey Wasserman’s History of the US and Solartopia! Our Green-Powered Earth are at harveywasserman.com along with Passions of the Pot Smoking Patriots by “Thomas Paine.” He and Bob Fitrakis have co-authored four books on election protection, including How the GOP Stole America’s 2004 Election, at freepress.org.