Ukraine, which resisted efforts by the European Union to integrate it into Europe’s banker-led federation of austerity and poverty, came into the EU’s cross hairs after it abandoned talks with Brussels and Berlin in favor of an economic union with Russia. That move triggered off what can be described as the “Second Orange Revolution,” a mass street uprising in Kyiv’s Maidan (Independence) Square that demanded the resignation of Ukraine’s democratically-elected president and government.

The connections between the Kyiv uprising and the EU outside manipulators are so apparent that the Kyiv square has become the “Tahrir Square” of Ukraine and is called “Euromaidan.”

This “Orange Crush” was spearheaded by the same George Soros/National Endowment for Democracy/CIA provocateur guru Gene Sharp hydra that saw the overthrow of Ukraine’s government in 2004 in the so-called Orange Revolution. This time, Ukrainian President Viktor Yanukovych is the target.

Nuland, who is married to the bloody-handed neocon archangel Robert Kagan, handed out snacks to protesters on Maidan Square. Imagine the reaction of the United States if a second-tier official of either the Russian or Chinese foreign ministry handed out food to Occupy Wall Street protesters in Washington and urged them to overthrow, by force if necessary, President Obama. Yet, that is exactly the scenario Nuland engaged in by supporting protesters in Maidan. Furthermore, she reprimanded Yanokovych for the heavy security presence in Maidan. Nuland and Kerry, who also upbraided Yanukovych, forgot the acts of police brutality committed by U.S. cops against Occupy protesters, as well as a plan by the FBI to use snipers to assassinate the leaders of the group.

And Nuland and Kerry were very quiet when the Turkish government sicced riot police on peaceful protesters in Taksim Square in Istanbul earlier this year. After all, Turkey is a member of NATO and Ukraine, for the time being, is not.

For Gene Sharp and his two NGO “babies,” OTPOR and the Center for Applied Nonviolent Action and Strategies (CANVAS), vanguard organizations for organizing “rent-a-riot” anti-government protests around the globe, only nations resistant to the “New World Order” designs of Wall Street and the Pentagon are fair game for receiving cash, snacks, and other support from the United States. Recently, it was discovered, through leaked emails, that CANVAS founder Srdja Popovic was collaborating with the CIA- and Pentagon-linked intelligence firm STRATFOR, founded by George Friedman, whose ties to the U.S. and Israeli military-intelligence establishments are well known. 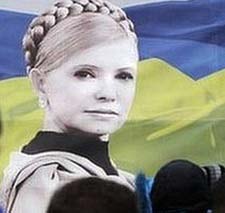 Nuland, Kagan, Soros, Sharp crowd rally around Ukrainian protesters and the "Euromaidan Maiden," the lady with the "bagel" on her head, Yulia Tymoshenko.

And as with all fake “themed” revolutions, an “embattled martyr” is needed to rally the “rent-a-mob” to action. For the Ukrainian demonstrators, the “Maiden of Maidan” is Yulia Tymoshenko, the former prime minister who was imprisoned for corruption. Tymoshenko, who is now held at a clinic in Kharkiv, has become the “Aung San Suu Kyi” of Ukraine. But for many Ukrainians, the former prime minister is a shameless attention seeker whose trademark braided hair coif is derided as a “bagel” on top of her head. The quip is a reference to Tymoshenko’s support for Ukraine’s leading Zionists and jailed Russian tycoon Mikhail Khodorkovsky, another darling of the Soros/Sharp/Nuland set.

One of the demands of the EU to agree to the pact with Ukraine was the release from prison and political rehabilitation of Tymoshenko. And Nuland and her neocon friends have made no secret of their desire to have Ukrainian ex-boxer and Udar Party leader Vitali Klitschko replace President Yanukovych in an undemocratic process brought about by the type of hooliganism that saw protesters topple a statue of Vladimir Lenin in central Kyiv. Who really benefits from the destruction of a Lenin statue? The answer to that question can be found in the banking corridors of Frankfurt and London, as well as the political power corridors of Washington and Brussels.

One Response to Neocons target Ukraine in “Orange Crush”