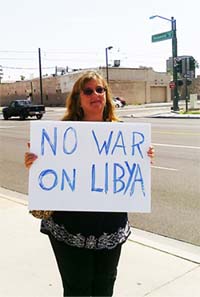 While the US, UK, France and Italy dropped missiles on Libya Saturday afternoon, a small group of folks and I were on the relatively empty streets of downtown Phoenix protesting this new war and all US wars.

The usual lies were spun over the past weeks about a bad dictator, human rights violations and supporting democracy loving CIA and MI-6 rebels. The US strong-armed anyone who could be bullied at the UN into passing a resolution which is the epitome of US hypocrisy. When Israel bombed Gaza at the end of 2008 in classic state terrorist style and killed 1,300 people and destroyed 20,000 buildings, there was no question of the US allowing the UN to impose a no-fly zone over Gaza to protect its people, 50 percent of which are children. The UN is nothing but a tool.

“We cannot stand idly by when a tyrant tells his people there will be no mercy,” said the tyrant Obama, US president of the most oppressively destructive country with the largest prison population in the world, from Brazil. Is he really fooling anyone? The only difference between him and Bush is that the level of deceptive spin has increased. Where we were fed “Shock and Awe” in 2003 to describe the genocide, destruction and takeover of Iraq by the US, now we are supplied with “Odyssey Dawn,” as the name of this war operation led by U.S. commanders during the initial phases. U.S. ships and warplanes will take the lead in the first round of attacks because of their “unique capabilities,” said a senior military official. The odyssey Obama and his corporate sponsors engage upon is apparent to anyone who knows how to follow the money.

“The invaders will award their companies rebuilding contracts, the money—likely taken from Libya’s frozen assets without accounting—will vanish and the country will remain largely in ruins, “ Felicity Arbuthnot wrote in Information Clearing House

“And the loudest cheerleaders for this, as Iraq, will be running round TV and radio stations in London, Europe and the US, then returning to their safe apartments and their UK/US/Europe paid tenures, in the knowledge that no bombs will be dropping on them. Their children will not be shaking uncontrollably and soiling themselves with terror at the sound of approaching planes,” she added. 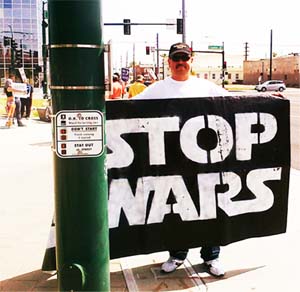 While we were merely a small group in Phoenix, there were other allies around the country also protesting against the US wars, old and new. As I stood with my sign held high on a street corner a young girl named Anya, greeted me with a hug. This protest was her first time manifesting in the streets against war. We tried to put some zest into our group’s chants as we marched along. People along the way honked and applauded in solidarity. There were probably as many police as protestors. I did not care, it was just right to be out protesting as the bombs were dropping.

Notice that the old imperialists of France, Italy and Britain now join with the new imperialist to get a piece of the swag. A French plane fired the first shot in Libya at 1645 GMT and French planes also flew reconnaissance missions over “all Libyan territory” French military sources said earlier. That’s invasion, pure and simple, but I guess it restores fried potatoes in the USA to their rightful place as “French fries” instead of “freedom fries,” while innocent Libyan people get killed and another country is destroyed.