The “twin harpies” of U.S. foreign policy bring mayhem to the world

(WMR)—U.S. National Security Adviser Susan Rice and her colleague, U.S. Ambassador to the UN Samantha Power, who can best be described as the “twin harpies” of U.S. interventionist foreign policy, have managed to turn back the clock to the Cold War in Europe, plunged a breakaway region of an African country after a long civil war into its own civil war, and forced the U.S. to deal with an Al Qaeda-led rebel faction which wants to turn Syria into an Islamic state.

After the disasters of the George Soros-backed 2003 Rose Revolution in Georgia, the 2004 Orange Revolution in Ukraine, and the 2005 Tulip Revolution in Kyrgyzstan, all of which brought pro-American and thoroughly corrupt governments to power, Rice and Power have dusted off the discredited Soros playbook. The “themed revolution” playbook, authored by Boston professor Gene Sharp, who is the master of staged street demonstrations-turned-coups d’état, is now being used once again in Maidan Square in Kyiv, the Ukrainian capital.

U.S.-financed opposition leaders, ranging from a former World Bank bureaucrat, to an ex-boxer and a neo-Nazi, are calling for the ouster of democratically-elected President Viktor Yanukovych. From the United states, neoconservative nomenklatura were dispatched to Ukraine to threaten Yanukovych with sanctions. These nomenklatura included the mentally ill U.S. Senator John McCain and a representative of the ever-present Zionist Kagan family, Victoria Nuland, who serves as Assistant Secretary of State for European and Eurasian Affairs under John Kerry. 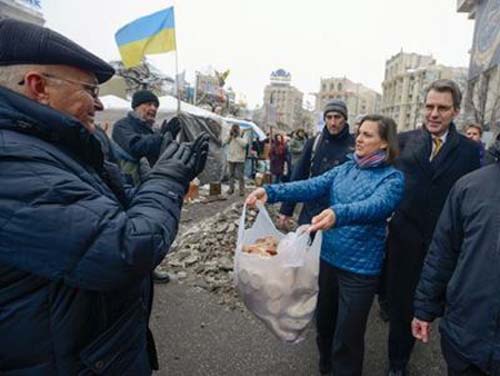 Rice's and Power's "bag lady" Victoria Nuland, married to arch-neocon Robert Kagan, handing out biscuits to protesters on Maidan Square, Kyiv. Imagine if a deputy foreign minister of China handed out food to Occupy Wall Street protesters on McPherson Square in Washington. What would Obama's reaction have been?

Meanwhile, Kerry has said he is set to meet the Syrian Islamic Front, which is heavily infiltrated by Al Qaeda elements on the payroll of Saudi Prince Bandar, one of the true masterminds behind the 9/11 attack. The Syrian Islamists want to turn Syria into an Islamic state and wallow in the blood of massacred Alawites, Christians, and Shi’as.

Once of Rice’s favorite countries and one that she personally ensured came into being, South Sudan, has been plunged into civil war. Army factions loyal to President Salva Kiir and those supporting former Vice President Riek Machar. Although it is not known whether Rice, while President Bill Clinton’s chief envoy for Africa, spread her legs for Kiir as she did for his predecessor, John Garang, it is clear that she favors Kiir. Rice, who ensured the breakup of Sudan after a long civil war is now having to handle a civil war of her own making.

The fingerprints of the two harpies is also on display on the streets of Bangkok where Yellow Shirt supporters of the King and former Prime Minister Abhisit Vejjajiva are demanding the ouster of democratically-elected Prime Minister Yingluck Shinawatra. Yingluck is the sister of former Prime Minister Thaksin Shinawatra, who is the unofficial leader of the rural-based Red Shirts. Thaksin was ousted in a 2006 military coup engineered by the king and his CIA overseers. Thaksin and his sister pose a problem for the United States. Not only do they support the rights of Thai farmers in Trans Pacific Partnership trade talks with the United States but they are also aware of the devastating effect Soros’s early 1990s attack on the Thai baht has had on the economy of Thailand. Thakin’s wife, while serving as First Lady, also came down hard on Thailand’s sex industry, which drives many girls and boys, some underage, into prostitution to satiate the whims of Western sex tourists.

Khunying Potjaman, who is now divorced from Thaksin, used her position to crack down on Thailand’s foreign-owned whorehouses and bars, earning her and her then-husband the wrath of Soros’s Russian-Israeli Mafia pals who make billions from the trafficking of young girls and katoeys, the latter boys who transgender themselves into females. These largely unwilling sex workers from rural Thailand, Thaksin’s and Yingluck’s base, manage to earn enough to send home to their relatives trying to maintain family farms against the onslaught of foreign agri-businesses eager to turn Thailand into another genetically-modified food producing nation.

Soros is using his media clout to disparage Yingluck and pave the way for the return of Abhisit. The Soros media is downplaying the murder charges pending against Abhisit while citing his opposition leader and prime minister-in-waiting status.

Rice’s and Power’s discredited “Responsibility to Protect” (R2P) operations have taken a far worse turn to the north of Thailand, in China’s Xinjiang province where Muslim rebels have increased their attacks against China’s presence. Recently, armed Uighurs attacked Chinese policemen in a village in the restive province. Sixteen people were left dead in the clash, including two Chinese policemen. On October 28, Uighur terrorists set off a car bomb in Tiananmen Square in Beijing, close to where China’s top leadership, including President Xi Jinping, was meeting.

Claiming responsibility for the Tiananmen attack was the Turkestan Islamic Party, which is part of a larger Uighur force, the World Uighur Congress. The Congress is led by “Mother of All Uighurs” Rebiya Kadeer, a recipient of Soros and CIA cash. Her husband, Sidiq Rouzi, who, like Kadeer, fled China for the United States, works for Radio Free Asia and the Voice of America. Kadeer and Rouzi, like so many hybrid CIA/Soros operatives, live in northern Virginia, the world capital for clandestine and overt U.S. intervention in countries around the world.

Radio Free Europe and Radio Free Asia have been the nesting grounds for many Soros apparatchiks. One, Estonian President Toomas Hendrik Ilves, who once worked for Radio Free Europe, has been a leading Soros apparatchik in using Twitter to egg on Maidan Square protesters. Ilves is more at home with U.S. neocons than members of his own parliament. After all, he is an imported Estonian. Another is Polish Foreign Minister Radek Sikorski, who is married to leading U.S. neocon journalist Ann Applebaum. Sikorski once worked for the neocon citadel, the American Enterprise Institute. Ilves and Sikorski are leading the call for the ouster of Yanukovych and his government. Both are Soros marionettes.

This cast of characters are the foot soldiers for Rice’s and Power’s R2P operations. They continue to besmirch the United States in the eyes of the world.

One Response to The “twin harpies” of U.S. foreign policy bring mayhem to the world