Can it ever be treated? Is it even possible? 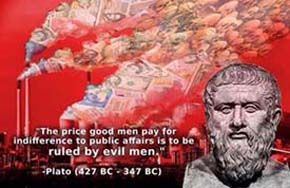 SAN FRANCISCO—It is time to call it what it is: It’s a Scam. It’s a Con Job. There is no solution, never was and never will be. That’s the whole Con and you, like most people, probably fell for the notion hook, line and sinker that radioactivity can be removed from water.

Keep in mind that these pro-nuker monsters are including killing you to fulfill their sick plan for the Good Life for themselves. You croaking is just accepted as part of the Requirements—not a problem for the pro-nukers.

Japan decided to stop treating radioactive water at the Fukushima reactors; it was announced on Mar 18, 2014, through its electrical subsidiary TEPCO, the Tokyo Electric Power Company.

The Japanese government had previously announced that as much as 264,172 US gallons of water a day flow through the derelict reactors and their abandoned reactor cores, then flows unhindered into the Pacific Ocean. That’s 5.2 Trillion Radioactive Drops of water a day poisoning the oceans, not than anybody is counting.

Around the world about two billion people (2,000,000,000 people) live on fish and other now radioactive products from the sea. As these people get progressively more severe radiation poisoning they will get sicker and die before their God given time is up.

These two billion people are not expected to die quietly and without some fuss. Food riots and so-called “civil unrest” are anticipated. Government propaganda outlets like the New York Times can be expected to gloss over the increased death rates as “natural” and as “something they ate.”

From a certain sick point of view, the radiation in the fish they ate that killed them was “something they ate.” Their “shortened life span” was entirely unnatural and completely manmade by pro-nukers. That is how the pro-nukers get away with “random premeditated murder,” normally a capital crime; which means it is punishable by the death penalty.

Governments will employ whatever means are necessary, including lethal force, to maintain a civil tone and public decorum. The government and corporate slugs that brought us this horror can thank their lucky stars the dying fish eating people don’t have much money to buy influence and their passing will not be televised.

Also, they are also mostly not white. They will just be—gone. Others, still living, will be thankful they are still alive.

The Times and other establishment “outlets” will interview scores of scientists on the issue who will say they are “befuddled,” amazed,” “surprised,” “stunned” and they “don’t know the cause.”

Is it possible to remove radioactivity from water?

No, it is not possible to remove radioactivity from water. It never has been even remotely possible. Short and simple, that is the answer.

Radioactivity is either removed or not removed, there is no in-between, there is no place for maybe. The Japanese are as good at removing radioactivity from water as anybody in the world and they have failed repeatedly and miserably.

I speculate that scientists have probably been trying to figure out how to remove radioactivity from water ever since Marie Curie invented the word “radioactivity” and discovered the elements polonium and radium. Marie Curie won her first Nobel Prize in 1903, no misprint there, either, that is as in Nineteen-O-Three, more than 111 years ago.

Always they fail, though, and ask for more of somebody else’s money to continue their fruitless, failed, doomed research.

So, any ideas as to what to do now that you know?

1. #Fukushima I NPP: Multi-Nuclide Removal System (ALPS) May Be Obsolete Even Before It Starts Full Operation Monday, December 30, 2013, http://ex-skf.blogspot.com/2013/12/fukushima-i-npp-multi-nuclide-removal.html

TEPCO was counting on the multi-nuclide removal system ALPS (Advanced Liquid Processing System) to be operational in the summer of 2012, so that the only remaining radionuclide . . .

“Licensing a nuclear power plant is in my view, licensing random premeditated murder. First of all, when you license a plant, you know what you’re doing—so it’s . . .

Bob Nichols is a Project Censored Award winner, a staff writer for Veterans Today, a correspondent for the San Francisco Bay View newspaper and a frequent contributor to various online publications. He reports on war, politics and the two nuclear weapons labs in the Bay Area. Nichols is writing a book based on 20 years of nuclear war in Central Asia. He is a former employee of an Army Ammunition Plant. You are encouraged to write Nichols at duweapons@gmail.com.

This entry was posted in Environment, Health. Bookmark the permalink.