CIA conspiracy operations are confirmed in CIA’s own report

(WMR)—It is now well-known that the CIA concocted the term “conspiracy theory” to defame those who questioned the official government conclusion on the assassination of President John F. Kennedy: single gunman, single fatal bullet, case closed. In his book, “Conspiracy Theory in America,” Professor Lance deHaven Smith of Florida State University writes, “The CIA’s campaign to popularize the term ‘conspiracy theory’ and make conspiracy belief a target of ridicule and hostility must be credited, unfortunately, with being one of the most successful propaganda initiatives of all time.”

The terms “conspiracy theory” and “conspiracy theorist” have been used to tarnish the reputations of academic researchers, authors, journalists, pundits, and, in fact, anyone who has questioned or continues to dispute official government explanations on everything ranging from political assassinations involving the CIA to false flag operations like 9/11 and the Boston Marathon bombing.

WMR has uncovered from CIA archives a report dealing with political instability around the world. The formerly SECRET report, prepared in 1985 during the height of CIA covert operations, including the Iran-contra scandal, is titled “Indications of Political Instability in Key Countries.” Several redactions are found in the declassified copy of the report. The CIA document on political instability was prepared by the CIA’s Directorate of Intelligence and is dated January 1985.

Essentially, while the CIA crafted the term “conspiracy theory,” its operatives utilized conspiracy operations to enable various CIA-funded-and-supported opposition groups to foment instability prior to overthrowing existing governments. What is now occurring in Ukraine serves as a contemporary example of the CIA’s use of conspiracies to foment disruption. False flag conspiracy operations have been ramped up against pro-Russian authorities in eastern Ukraine and against Russia itself. For example, lethal confrontations between local Ukrainians in the east of Ukraine and pro-Kiev forces are being blamed on Russian “special forces” units, when, in fact, the violence is being caused by CIA-supported fascist paramilitary units sent into eastern Ukraine from parts of the country that are loyal to Kiev and right-wing elements.

One CIA conspiracy operation is currently playing out in eastern Ukraine where, in an age of Photoshop and mail order credentials and military patches, photographs of the same bearded Russian “special forces” commando in Ukraine this year and Georgia in 2008 are being successfully parlayed to the corporate media and by the Ukrainian ambassador to the Organization for Security and Cooperation in Europe (OSCE) headquarters in Vienna. No one has mentioned that long beards for any true special forces commando is a strict taboo because any long hair can be pulled by an opponent in close hand-to-hand combat. That is why the Navy SEALS, Green Berets, and the Russian Alpha Group have strict standards barring facial or any long hair among their personnel.

‘The 1985 CIA report matrix dealing with instability indicators includes a metric under the heading of “opposition activities,” called “Opposition conspiracy/planning.” The report describes various external and internal factors, many of which could be considered “conspiracy” operations, designed to bolster opposition forces against elected and unelected governments ultimate goal being one crisis after another that could be exploited by the United States government and multinational corporations. 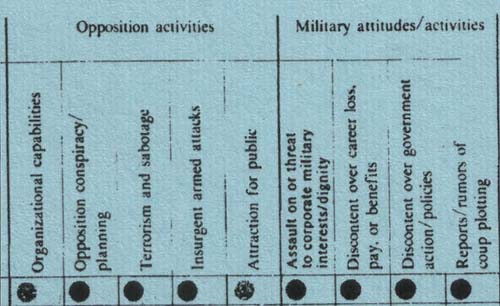 The CIA was quantifying conspiracies against other governments in 1985. If you can count conspiracies and assign values to them, they most certainly do exist.

In what is a clear early stage of the CIA’s later “themed revolutions” in Ukraine, Georgia, and “Arab Spring” countries, the CIA report states that one way to launch a conspiracy by the opposition against entrenched leaders is replacing the “pictures of rulers in houses, shops, etc.” with that of the “leading political or religious opposionist.” The CIA document also cites acts of terrorism or sabotage being key to deterring “any part of the general public from supporting the government.”

For example, the CIA rates opposition conspiracy/planning operations in Mexico as strong and describes “political manipulation” stemming from “austerity measures” as key parts of the movement to destabilize the government of President Miguel de la Madrid. The 1985 Mexico City earthquake destroyed any chance for de la Madrid to stabilize Mexico’s economic situation. De la Madrid irritated the CIA by his leadership of the Contadora Group of Mexico, Colombia, Panama, and Venezuela to end the civil wars in El Salvador, Nicaragua, and Guatemala peacefully.

Conspiracy operations against the government of El Salvador President Jose Napoleon Duarte are also rated as significantly strong. The CIA report states that El Salvador’s CIA-supported military was “leery” of the president’s plans for a cease-fire with leftist guerrillas. In June 1988, Duarte was rushed to Walter Reed Army hospital in Washington, DC, where he was diagnosed with advanced stomach and liver cancer and given between six months and a year to live. During chemotherapy and surgery in the United States, Duarte refused to resign as president even though he was under great pressure from the El Salvador military and its CIA handlers to do so. Duarte completed his term and died in 1990 in San Salvador.

Conspiracy operations ruled the day in Panama. President Nicolas Barletta ruled as a de facto puppet of the chief of defense, General Manuel Noriega. Barletta had been a trusted adviser of Panamanian strongman Omar Torrijos, assassinated in 1981 in a plane crash widely believed to have been engineered by the CIA.

The CIA rated conspiracy operations in Panama as part of a program that would bring about a regime change within six months to two years. In 1985, Barletta canceled unpopular austerity measures dictated by the International Monetary Fund. That decision spelled the end for Barletta who lasted only nine months in office, proving the CIA’s prognostication on Barletta’s fate correct. After Barletta vowed to bring the murderers of government critic Hugo Spadafora to justice, the president was forced to resign as president by Noriega and his junta in September 1985. The resignation paved the way for continued destabilization of Panama that ultimately resulted in the U.S. invasion of Panama in December 1989.

Long before the CIA’s incessant attempts to overthrow the governments of Venezuelan Presidents Hugo Chavez and Nicolas Maduro, the agency trained its conspiracy operations on Venezuela’s President Jaime Lusinchi. After Lusinchi granted concessions to labor unions to, as the CIA put it, “cushion the impact of austerity,” he was faced with increased terrorist activity along the border with Colombia. In fact, the terrorists were CIA-financed narco-paramilitary units, the same CIA construct that is being used to foment disruption inside Venezuela today. President Maduro is ridiculed in the corporate media for entertaining “conspiracy theories” about his nation being beset upon by CIA disruptors. Yet, a 1985 CIA document proves that these very same opposition “conspiracies” were used against Lusinchi in 1985. Lusinchi ultimately fled Venezuela for Miami and he lives in exile in San Jose, Costa Rica.

Although rated low in conspiracy operations and planning, Turkey was rated high by the CIA in the area of reports and rumors of military coup planning. This was during the government of Prime Minister Turgut Ozal who was seen as being weakened by a failing economy and Kurdish terrorist activity. The CIA foresaw a destabilized Turkey over the next “year or two.” One of the reasons cited by the CIA was “tensions among the four factions” in the ruling Motherland Party “creating yet another destabilizing pressure point on the Ozal government.”

After the CIA report was issued, Ozal survived a suspicious plane crash and an assassination attempt by a member of the Turkish military’s special warfare branch. Ozal, who was elected President of Turkey in 1989, died suddenly in 1993 from a suspicious heart attack after drinking lemonade. An exhumation of Ozal’s body later concluded that there were traces of poison in Ozal’s body.

The CIA’s report states: “We doubt that the Ozal government will last through the next two years.” The outlook was on the pessimistic side. Ozal continued to rule for the eight years before his suspicious death from poisoning.

Sudan was rated as increasingly favorable for conspiracy operations against the government of President Jaafar Nimeiry. Southern Sudanese guerrilla activity, coupled with “food and energy shortages” made Nimeiry “increasingly vulnerable to a coup” in the eyes of the CIA destabilization planners. On April 6, 1985, while Nimeiry was on an official visit to the United States to meet President Ronald Reagan, he was deposed in a coup led by his defense minister, Abdel Rahman Swar al-Dahab, an ally of the fundamentalist Muslim Brotherhood, a Islamist party rumored to have been created and controlled by British MI-6 intelligence. The CIA report, issued in January 1985, gave Nimeiry from six months to two years in office before being ousted by a military coup. He was ousted in a coup two months after the issuance of the CIA report.

Another nation rated as highly vulnerable to opposition conspiracy operations was Pakistan. Its leader, General Muhammad Zia Ul-Haq, was seen by the CIA as reaping “political backlash” from Pakistan’s opposition. On August 17, 1988, after he viewed a demonstration of the prowess of the U.S. M1 Abrams tank in Bahawalpur, Zia and U.S. Ambassador to Pakistan Arnold Raphel departed the town in a U.S.-made C-130 Hercules aircraft en route to Islamabad. The plane crashed, killing Zia, his senior advisers, Raphel, and the head of the U.S. military aid mission in Pakistan. There was speculation that the CIA, possibly using Indian and/or Israeli intelligence operatives, was responsible for the crash. The 1985 CIA report reckoned that Zia had between six months to two years before being ousted in an opposition conspiracy operation.

The CIA had been accused of fomenting Sikh violence against the Indian government, actions that finally led to the assassination of Indian Prime Minister Indira Gandhi by her Sikh bodyguards in 1984, the year prior to the issuance of the CIA instability report. The CIA report stated that Mrs. Gandhi’s successor, her son, Rajiv Gandhi, faced inter-religious turbulence during the next six months in office. Rajiv Gandhi was killed by a suicide bomber in Tamil Nadu in 1991. The assassination was blamed on Sri Lankan Tamil terrorists but there were suspicions that the CIA was involved in eliminating from the Indian political scene another member of the family of non-aligned nations champion Jawaharlal Nehru. 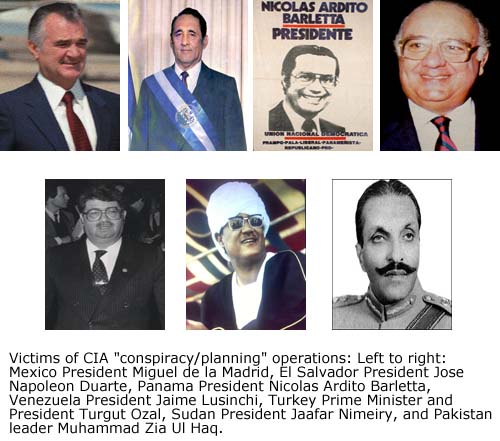 Other leaders given little to chance of surviving “conspiracy operations” include Nigerian President Muhammadu Buhari, ousted in a coup on Augusrt 27, 1985—some eight months after the issuance of the CIA report due to one of the main reasons cited by the CIA for his projected ouster, “a bleak financial outlook aggravated by a weak oil market.” Philippines President Ferdinand Marcos was given a poor prognosis for continuation in office following the disclosure that his Army chief of staff, General Fabian Ver, was involved in the assassination of opposition leader Benigno Aquino, who traveled from exile in the United States to a certain assassination at Manila International Airport that was known to the CIA in advance. Marcos fled into exile to Hawaii in 1986. Much of Marcos’s wealth in Japanese gold commandeered from Japanese military forces in the Philippines after World War II was transferred to the coffers of George H. W. Bush. Some would call such a charge a “conspiracy theory.” The CIA’s own document cites conspiracy operations as part of the agency’s tradecraft.

The next time someone makes the accusation that you are repeating “conspiracy theories,” just tell them “conspiracy operations” are contained in the CIA’s political instability handbook, prepared under the leadership of the ultimate Iran-contra conspiracist William Casey in January 1985. It is the proof for which the conspiracy debunkers are always clamoring.