Pope Francis under physical threat from Vatican bankers; pontiff may have been poisoned

Like Pope John Paul I, Pope Francis is threatened by Vatican bankers keen on maintaining the Vatican’s status as an international money laundering center, according to information provided to WMR by sources deeply entrenched in daily Vatican operations.

Pope Francis has reportedly incurred the wrath of the Vatican’s Institute of Religious Works (IOR), which operates the Vatican Bank. Francis, who lost a lung as a child due to a severe illness, came down ill three times with a serious stomach illness in June. The illnesses required the normally-energetic pontiff to cancel public appearances. The pope has increased his criticism of the world’s capitalist economic system, a system he said has to make war in order to make money.

In January, the pope radically changed the membership of the IOR’s oversight board, the Supervisory Commission of Cardinals, sacking all but one of the cardinals previously appointed by Pope Benedict XVI. In 2013, Francis appointed an independent commission, the Financial Information Authority (AIF), to oversee the IOR’s varied financial operations, including bank holdings of €5 billion in assets and €770 million in equity funds.

In addition, the pope appointed his friend, Monsignor Battista Ricca, to supervise the IOR’s operations.

In early June, shortly before the pope took ill, he fired the five Italian male members of the AIF, replacing them with a team of international professional financial experts, including a woman, Maria Bianca Farina, the head of two Italian insurance firms. The other members are from the United States, Singapore, and Switzerland. The AIF’s Swiss director, Rene Brulhart, an expert on countering money laundering clashed with the five Italian male members, said to represent the interests of the Knights of Columbus — said to be members of the Catholic wing secretly subservient to the Freemasons — and other “old boy network” members in the Vatican who were resistant to changing the direction of the IOR and making its operations more transparent.

In June 2013, a report on the operations of the IOR linked the Vatican Bank to suspicious accounts held by the Vatican embassies in Iran, Iraq, Syria, and Indonesia. All four countries were CIA- and George Soros-financed targets. In the 1980s, the Vatican Bank was used by the CIA to covertly fund anti-Communist paramilitary groups in Argentina, Nicaragua, El Salvador, Honduras, and other countries, as well as being involved in aspects of the Iran-contra scandal. The operations reportedly had the blessing of the anti-communist crusading Polish pope, John Paul II.

The IOR “insiders” sacked by Francis all had close ties to Carl Anderson, a member of the IOR Board of Superintendence and the head of the Knights of Columbus. The chairman of the board is German Ernst von Freyberg, said to be a reformer but who is also a knight of the Sovereign Military Order of Malta, a group that also is said to have links to the Freemasons. 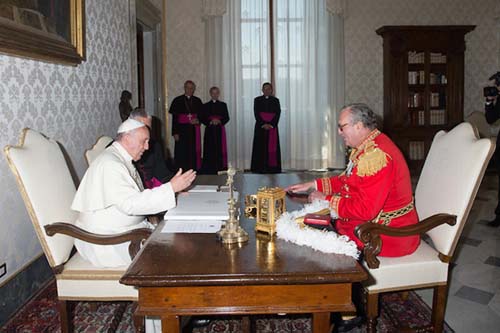 Grandmaster of the Order of Malta Matthew Festing (right) meeting with Pope Francis on June 20, 2014, during the Pope's illness.

In the case of Pope John Paul I, he died suddenly in 1978 under mysterious circumstances, believed to be poisoning, after vowing to fire and prosecute every corrupt official of the Vatican Bank. Sister Vincenza Taffarel, the nun who found John Paul’s body in his bed at the papal apartment in the Vatican, reportedly found a note clutched in his hand containing the list of corrupt Vatican curia members tied to the Freemasons and the Vatican Bank. Sister Vincenza went to her grave adhering to the vow of secrecy required of every nun.

The murder of John Paul I, on the 33rd day of his papacy, the number “33″ being linked to the P-2 Masonic Lodge where a number of Vatican officials held membership, was specifically linked to the MAFIa, for which Pope Francis has directed specific scorn; the IOR under Cardinal Paul Marcinkus; and the CIA, which used the Vatican Bank to launder money to dozens of guerrilla movements around the world.

Unlike John Paul I, Pope Francis refuses to live in the papal apartment, opting to maintain his residence in the Vatican hotel used by visiting cardinals. Francis, we are told, believes the third secret of Fatima, imparted to three shepherd girls by the Virgin Mary in Fatima, Portugal, was that a future pope — now said to have been John Paul I — would be murdered by malevolent infiltrators of the church. Pope Benedict XVI scoffed at the notion that the third secret was the murder of a pope, however, bishops who worked personally with Popes John XXIII and Paul VI believed the original text of the three secrets of Fatima have been tampered with, with the alteration of the message delivered to the three Portuguese girls being expanded from one page to four pages.

5 Responses to Pope Francis under physical threat from Vatican bankers; pontiff may have been poisoned