What is wrong with Gareth Porter—an interview 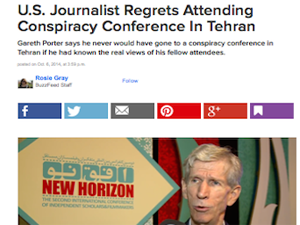 A few days ago, I came across a disturbing article on Buzzfeed. The headline read; “U.S. Journalist Regrets Attending Conspiracy Conference In Tehran.” According to Buzzfeed, Gareth Porter, a respected journalist and critic of the Jewish lobby and Israel, reported that he would have never have attended the “conference in Tehran if he had known the real views of his fellow attendees.”

But the report didn’t stop there. In an attempt to justify his position, Porter proceeded to breach the ethics of journalism—he published an email correspondence with a top Iranian official without requesting permission to do so. Porter didn’t even bother to correct the spelling and typos of the Iranian official.

But the entire story is not all bad. While most non-ethical conspirators operate in a clandestine manner, Porter exposed his methods. For some reason he provided a precious glimpse into the entire spectrum of ugly tactics that are employed to keep the gates sealed. It is not a secret that instead of choosing to be a guardian of the truth, the contemporary progressive operates as a guardian of the discourse, or, more accurately, ‘the progressive discourse.’

The Buzzfeed article is a very sad piece. It conveys an image of a weak human being desperate to save his reputation. In order to do so he tries every trick he knows. Sadly, he achieves the opposite. In his attempt to smear Mark Glenn, the man behind The Ugly Truth Radio Network, Porter quotes Glenn out of context. He fails to comply with even the minimum journalistic standard of fairness and provide a URL reference for his quotation. One would expect this from Dershowitz, but not from a ‘progressive dissident.’

The crucial question not answered by his article, is who is Porter trying to appease? Why does he defame Mark Glenn who didn’t even attend the conference? Is it possible that veteran progressive journalist Porter is breaching every journalist ethic just to convey the image that he is committed to Jewish primary interests?

I wonder what made Porter, who isn’t a novice, perform in such an unprofessional, non-journalistic and non-ethical manner. I initially thought that he was under some horrendous Zionist pressure. I decided to approach Porter and find out whether he could offer some explanations. I was hoping to hear that his computer was hacked, that his HD was stolen, that he doesn’t know how all that information leaked to Buzzfeed, but I soon realised that my expectations were far too lofty.

Gilad Atzmon: Hello Gareth, Gilad Atzmon here. Any chance we could have a short chat followed by an interview?

Gareth Porter: For Whatsupic? (a new anti-Zionist outlet that reported on Porter’s fiasco earlier this week)

Gilad Atzmon: Not at all, I was actually very disturbed by Whatsupic’s article. I wanted to hear your take first . . .

Gareth Porter: It’s very simple. I said it all in my email to Buzzfeed, which is all in the story. I won’t be associated with people who are openly anti-Jewish, as distinct from anti-Zionist. Mark Glenn was clearly the former.—

I guess that by now it is clear that Buzzfeed’s agents didn’t break into the Porter house in the middle of the night or hack his computer from afar. Porter voluntarily sent the information to Buzzfeed, defaming some thinkers, with the hope of disowning his own journey to Iran.

Porter continues: I was told by a participant in the conference that three French guys displayed cartoons that made fun of the holocaust, which I found unacceptable. And the Italian who I heard speak put a paper on the table that said Judaism is the enemy.

Gilad Atzmon: I assume that you are familiar with my take on the topic. I am not anti Jew or anti Judaism, but I am certainly anti Jewishness, which I define as different forms of celebration of Jewish exceptionalism.

Gareth Porter: I’m not really familiar with it but that wouldn’t cover what was said by Glenn or Prof. Moffa or the Frenchmen right?

Gilad Atzmon: Of course, however, you have to remember that Israel is the Jewish State, it is supported by the Jewish Lobby, and you are very critical of the Jewish lobby, as far as I am aware. Hence it is necessary to find out once and for all what Jewishness stands for, don’t you agree?

Gareth Porter: How is this related to what I have explained?

Gilad Atzmon: Simple, if Israel defines itself as the Jewish State and it decorates its airplanes with Jewish symbols, shouldn’t the rest of us ask, once and for all, what is Jewishness?

Gareth Porter: Why is that necessary to take (such) a stand against the Israeli state and its policies? I suggest that it isn’t. Plenty of people, including Jews and non-Jews have been doing so for a long time.

Again what does this have to do with your question to me?

I guess that by now Porter has expressly admitted that he opposes any attempt to understand the meaning of Jewishness as it relates to the Jewish State. In addition, he has expressed his opposition to the most precious American value, freedom of expression. One would expect an American dissident writer to be the first to defend the first amendment rather than attempting to suppress free speech. Porter produced a deeply flawed and embarrassingly bad argument. The fact that many activists or even scholars (both Jews and gentiles) avoid touching the ‘J’ word doesn’t, by itself, mean that the ‘J’ issue should be dismissed. It only means that many of our leading scholars and activists are probably too scared to ask the core question to do with the State that defines itself as the Jewish one.

Gilad Atzmon: Ok, so you believe that the fact that Israel claims to adhere to Jewish principles is something that we should ignore in our analysis of its politics. Am I correct?

Gareth Porter: I don’t want to get into this more deeply. You know as well as I do that plenty of people have argued from before the beginning of Israel against the project on the basis of “Jewish principles.”

This is actually not true at all, those secular Jews who opposed Israel and the Zionist project in the name of universal principles, employed non-Jewish principles (such as Martin Buber, and Israeli Communists). The Jews who opposed Israel and Zionism in the name of Judaism (such as the Torah Jews) did so in the name of Talmudic teachings that have nothing to do with ethics, universalism or any morally oriented principled thought. I assume that Porter is clueless as far as ‘Jewish principles’ are concerned and seemingly this is not going to change because he clearly attempts to silence every discussion on the topic.

Gilad Atzmon: I will explain it all. If Jewishness becomes the ‘issue,’ then some people (such as Mark Glenn) may as well look for answers in Judaism, others may look into ethnicity, some would look into culture. After all, no one stopped Max Weber from looking into the core of Protestant religion and its impact on capitalism.

Gareth Porter: I don’t have time to continue. I’ve got two pieces to finish. Look I’m not knocking anybody who wants to explore questions of what it means to be Jewish. But I’ve explained why I said (and) what I did showed that.

Gilad Atzmon: Ok, final question, you shared with the public emails from a top Iranian official, did you obtain the right to do so?

Gareth Porter: I reject the premise of your question. These were not personal e-mails. They related to matters of public interest about which I was subject to a smear campaign by right-wing extremists.

Gilad Atzmon: I guess that the answer is NO then . . . Thanks so much for your time.

All that remains is for us is to roll our eyes the toward the heavens in dismay and ask, ‘how did this happen to us?’ How did it happen to Porter? How did this defeatist culture win over true dissent? I have been sad in the last few days, witnessing a journalist of Porter’s abilities compromising journalistic principles in a desperate attempt to appease the Jewish media, the same power he so profoundly criticised in the past. But at least this failure explains why progressive dissent has achieved nothing. We are dealing with a weak operation on the verge of controlled opposition.

Gilad Atzmon is an Israeli jazz musician, author and political activist. His new book, “The Wandering Who,” may be ordered from amazon.com or amazon.co.uk.