The CIA’s themed revolution against Putin

In addition to the always-present George Soros in destabilization efforts in eastern and central Europe, is exiled Russian Zionist tycoon Mikhail Khodorkovsky, who Putin paroled from prison last year after his conviction for tax evasion and embezzlement involving his former Yukos energy conglomerate. Khodorkovsy was released on the grounds that he cease all attempts to undermine the Russian government. Khodorkovsky reneged on his end of the deal after he arrived in Switzerland and Israel. No sooner had street demonstrations involving the Euromaidan-like mix of neo-Nazis, militant homosexuals, and Zionists spring up in Moscow, Khodorkovsky, from his Swiss retreat, said he would “not rest until the political and physical Putin are destroyed.” Khodorkovsky also signaled that he wanted to replace Putin as president of Russia.

Khodorkovsky’s and Soros’s designated Moscow rabble-rouser is Aleksandr Navalny, who, like the Ukrainian putschists during Euromaidan, has unashamedly appeared at protest rallies alongside neo-Nazis and racist skinheads. In 2013, Navalny, while a candidate for mayor of Moscow, raised a glass to toast the Holocaust at a reception. However, Navalny and his anti-Putin protests have benefited from the technological advice, including maximum use of social networking, provided by two Russian-Israeli Jews, Leonid Volkov and Maksim Kats.

Navalny and his brother, Oleg Navalny, were charged and convicted of using the French cosmetic company Yves Rocher as a money laundering operation to funnel millions of dollars, likely from the CIA and Soros, to the anti-Putin Russian opposition. Apparently, Navalny and his brother had sticky fingers and they were criminally charged with embezzlement and money laundering. Russian prosecutors were aided by the testimony of the former head of Yves Rocher Vostok, Bruno Leproux, who charged that the Brothers Navalny embezzled $722,000 from the company. Not content with stealing a quarter-million dollars from Yves Rocher, the Navalnys were also charged with embezzling $111,000 from another company, Mnogoprofilnaya Protsessingovaya Kompaniya (Multi-profile Processing Company) and laundering an additional $583,000). The embezzlement and money laundering, which involved Cypriot banks, mirrors the activities of other Russian Zionists, including Khodorkovsky and the late Boris Berezovsky. It is alleged that Navalny’s offshore company in Cyprus was receiving funds directly from the CIA-linked National Endowment for Democracy (NED).

Oleg was sentenced to prison while Aleksandr received a suspended sentence, which he immediately violated by organizing a political protest at Moscow’s Ryad Metro station. Both Navalnys are now in prison but they have engendered support from the same troika of exiled Zionist oligarchs like Khodorkovsky, neo-Nazi skinheads, and militant homosexuals, all being egged on by the CIA and the Soros operatives in Russia. Aleksandr Navalny’s protest was designed to bring attention to a planned January 15 Euromanezkha protest against Putin. Although the Western corporate media reported that there was a large protest in Moscow supporting Navalny, merely a few hundred people actually showed up at the unauthorized and illegal Ryad protest. None of the protesters carried flags or banners. Russian police made a few arrests, including Navalny who violated the terms of his suspended sentence. The laws in Moscow and Washington, DC, are identical when it comes to protests. In both, protests are illegal unless a permit has been granted by the local authorities.

In late December, Euromanezhka soon became the new rallying cry for the Khodorkovsky-Soros gang, and their neo-Nazi and militant homosexual allies. To the aid of the militant gays came the bearded winner of the 2014 Eurovision contest, Austrian transsexual singer Conchita Wurst whose real name is Thomas “Tom” Neuwirth. Wurst won the Eurovision contest with his song “Rise Like a Phoenix,” which was soon the subject of a Russian parody called “Rise Like a Penis.” As with other themed revolutions, the CIA and the Soros gang resorted to social networking to carry their propaganda. In a Twitter message, Wurst not only endorsed the planned January 15 anti-Putin Euromanezhka protest and announced he wanted to be present at it but he also offered to meet with Putin in Moscow. 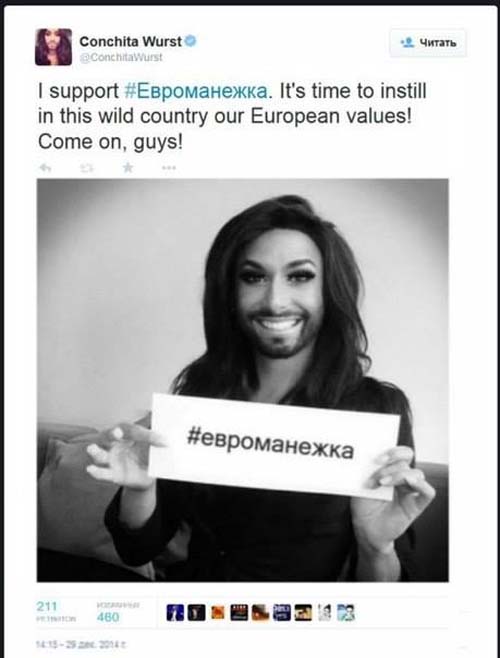 America not only used a bearded tranny to carry its message in Moscow but is also resorting to use bikini-clad and tattooed women on the U.S. State Department Twitter page to appeal to Russians to join the protests against Putin.

If Wurst doesn't appeal to anti-Putin Russians, the State Department believes that bikini-clad women will do the trick.

The Khodorkovsky and Soros gang is aided and abetted in their anti-Russia activities by Putin critic and former head of the Russian Jewish Congress, Yevgeni Satanovsky, which is literally translated as “son of a Satanist.”

The overall plan by the Soros/Khodorkovskly gang is to oust Putin in the same manner that saw Yanukovych toppled from power in Kiev. Soon, U.S. and European Union citizens will arrive in Moscow to assume control of key ministries, including finance, industry, and others. This is exactly what has occurred in Kiev where Americans, Lithuanians, and other foreign nationals, including Israelis, are now in control of key government posts. 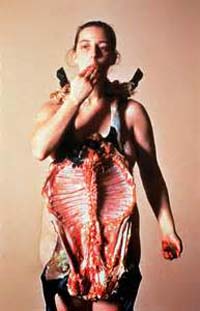 Bruguera's wearing of only raw meat is typical of the shock value used by such groups as FEMEN, Pussy Riot, and Voina.

What Washington and the CIA have planned for Moscow will not stop there. After staging a sexually-perverse protest in Havana’s Revolution Plaza, “performance artist” Tania Bruguera was arrested by Cuban authorities, only to be released after the same furor was raised by the usual suspects in the West who cried foul over Russia’s arrest of the Navalny provocateurs. Bruguera appears to take her cues from the perverse protests staged by FEMEN (created by Jeff Sunden, a New York-based Jew who bought and sold the Kyiv Post and who took his orders from Soros), Voina, and Pussy Riot. 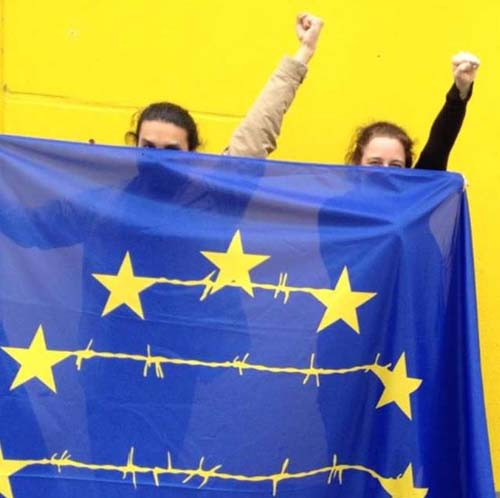 The Euro-Soros roots of Bruguera's protests in Havana can be seen in this specially-made flag. Newly-manufactured flags representing past regimes or CIA/Gene Sharp-style color contrivances dominate America's "themed revolutions."

regard to their destabilization efforts around the world are becoming clear. This cabal can only rely on screaming naked women disrupting church and mosque services, a bearded Austrian tranny, and Russian-Israeli gangsters to carry their message. The people of Russia, eastern Ukraine and Crimea, Cuba, Hungary, Slovakia, Serbia, the Czech Republic and other countries have seen the human filth that carries the water for Langley and Tel Aviv and have rejected the message.