In a repeat of the Central Intelligence Agency’s globe hopping weapons transport cargo planes of the Iran-Contra scandal and the more recent Libyan rebel supply caper to overthrow Muammar Qaddafi, a Ukrainian Antonov AN-124 (tail number UR-82072) heavy lifter military transport plane, denoted as an “International Cargo Transport” and belonging to the “Antonov Transport Bureau,” astonished residents around Belgrade’s Nikola Tesla International Airport in Serbia when it landed there on January 28, 2015. The Ukrainian plane, the world’s largest aircraft, was a rare sight at an airport in a country that generally supports Russia in its conflict with Kiev.

In September of last year, Ukrainian President Petro Poroshenko said that a number of NATO countries have agreed to deliver weapons to Ukrainian forces, which consist not only of regular Ukrainian troops but irregular battalions, supported by billionaire Ukrainian-Israeli warlord Ihor Kolomoisky, consisting of neo-Nazis, U.S. and other private military forces, and ex-Israel Defense Force personnel. At the time of the September 2014 NATO summit in Wales, Ukrainian presidential adviser Yuri Lutsenko said that the United States, France, Poland, Norway and Italy had agreed to supply weapons to Ukraine and Canada later revealed that it had also commenced weapons transfers to the Kiev putschist regime.

Ukraine’s military forces have received so much NATO military aid and assistance and personnel, Russian President Vladimir Putin recently said that the Ukrainian Army is acting as NATO’s “foreign legion.” There are also credible reports that NATO has supplied the Kiev regime with deadly cluster bombs that are being used against the largely Russian-speaking civilian population of the Donbass region of eastern Ukraine. 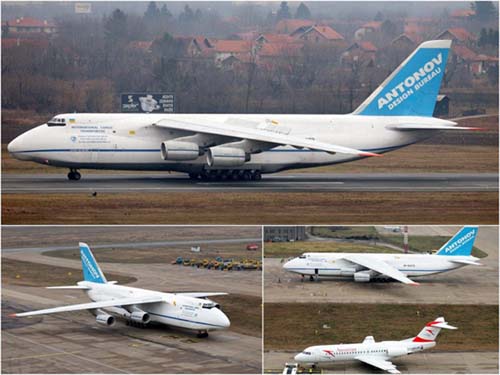 Antonov AN-124 (UR-82072) military transport plane suspected of ferrying weapons to Kiev seen on January 29, 2015, at Belgrade airport.

The AN-124 that landed in Belgrade appears to have been ferrying weapons from a number of known NATO air terminals used for such purposes. After arriving in Bucharest, Romania, on January 23, 2015, from the Italian island of Lampedusa, off the coast of Libya, the aircraft departed on January 23 for New Jersey in the United States. Lampedusa was a major staging base for NATO weapons supplies to Libyan rebels during the Western- and Islamist-inspired rebellion against the Qaddafi government. Bucharest has become a major base for NATO military support to Kiev.

On January 25, the Antonov departed Newark Liberty International Airport, New Jersey, for Trondheim, Norway. On January 26, the Ukrainian transport plane left Trondheim for Prestwick Airport, Glasgow, Scotland. The plane departed Prestwick on January 28 and touched down the same day at Belgrade. Prestwick was a favorite transit hub used by the CIA for the rendition of detainees following 9/11.

The United States has positioned six storage units located in the mountains of Norway’s central Trøndelag region, the capital of which is Trondheim. U.S. military equipment, including tanks and armored personnel vehicles, are stored at two Norwegian Air Force stations in the area, one of them being co-located with Trondheim Airport Værnes where the Ukrainian Antonov landed on January 26.

The Antonov’s destination after it left Belgrade was Mombasa, Kenya, via Athens. The plane was reported by Serbian sources to be carrying “special cargo” weapons. It is conceivable that UR-82072 dropped off in Athens for further shipment to Ukraine weapons loaded at NATO airports in Lampedusa, Glasgow, and Trondheim, as well as Serbian caches placed on board in Belgrade and, perhaps, U.S. weapons stored at Picatinny Arsenal in Morris County, New Jersey, the Defense Department’s Specialty Site for Guns and Ammunition, and Naval Weapons Station Earle, New Jersey. Both weapons bases are in close proximity to Newark Liberty International. The AN-124 is permanently based at Kiev’s Gostomel Airport. 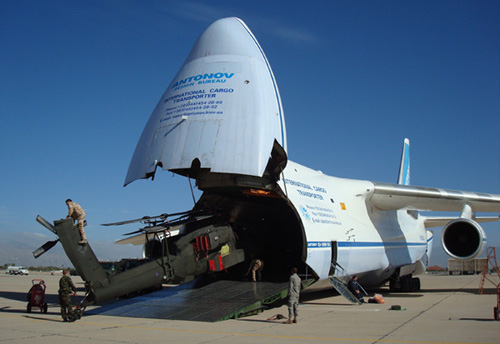 Helicopter being placed on board Ukraine's "Flying Dutchman" weapons transport.

Ever since fighting broke out between Ukrainian forces and Russian-speaking separatists in eastern Ukraine, the mysterious Ukrainian AN-124 has been spotted around the world, likely picking up weapons. On June 18, 2014, it was seen at Tel Aviv’s Ben Gurion International Airport. Before that, it was seen on May 22, 2014, at Las Palmas, Canary Islands, in what may have been a refueling stop. On January 1 and 6, 2015. and November 23, 2014, it was spotted at Leipzig/Halle Airport in Germany; on July 2, 2014, it was Luqa International in Malta (Malta was another staging base for weapons supplies to anti-Qaddafi forces during the Libyan civil war); and on April 15, 2014, at Francisco Sa Carneiro Aiport, Porto, Portuga,1 and a week later, on April 27, at Schwechat Airport in Vienna.