During the recent Republican presidential candidates’ “debate” in Cleveland, former Florida Governor John Ellis Bush (JEB) wanted to recount his eight years as governor of the Sunshine State. However, it is not Bush the politician who should be of interest to voters but Bush the Central Intelligence Agency “non-official cover” banker in Venezuela and Miami-based real estate businessman/money launderer who should alarm the American electorate. While Jeb’s brother, George W. Bush, glossed over his AWOL status with the Texas Air National Guard, Jeb does not have a military record to defend but he does have a CIA employment record to fess up to.

Jeb’s early work in Venezuela and south Florida is much more troubling than Dubya pretending to be on active duty in Texas while he was actually off in Alabama helping a GOP U.S. Senate campaign and getting sloppy drunk in redneck bars. Jeb should fully explain his relationship with Alberto Duque, a Colombian national who laundered drug money for the Medellin and Cali narco-cartels and Nicaraguan contras while serving as owner of City National Bank of Miami and president of the General Coffee Company of Colombia. Apparently, there was more than coffee arriving in sacks of coffee coming into Miami from Colombia. Duque financed a $30 million real estate development project run by Jeb Bush. In 1983, Duque was convicted for fraud and sent to federal prison. Duque hired a Bush family CIA crony to serve as City National Bank’s president. He was Don Beazley, who previously worked for the CIA’s Nugan Hand Bank in Australia. Before it collapsed, Nugan Hand was responsible for laundering money from the CIA’s Golden Triangle opium and heroin smuggling operations from Southeast Asia’s Golden Triangle and paying off U.S. surrogates in Asia, including Ferdinand Marcos in the Philippines, Suharto in Indonesia, Park Chung Hee in South Korea, and various Thai generals.

Beazley had also been president of Great American Bank of Miami. The bank was indicted for drug money laundering in 1982. Beazley also negotiated the sale of Second National Bank of Homestead, a subsidiary of Great American, to Nugan Hand. It was in this environment of interconnected CIA money laundering banks that Jeb Bush found himself and his real estate business immersed in the 1980s.

On January 25, 1980, Frank Nugan, the Australian co-founder of Nugan Hand Bank, was found dead in his car near Bowenfels, New South Wales from a “self-inflicted” rifle shot wound to his head. The card of ex-CIA director William Colby, who, himself was found floating in Chesapeake Bay, Maryland in 1996, was found in Nugan’s pocket. Colby was Nugan Hand’s legal counsel. Hand had planned to move with his wife and three young children to Florida but someone apparently did not like the idea of Nugan showing up in Florida during the year George H W Bush was trying to become the president of the United States.

After serving as vice president for Texas Commerce Bank in Caracas from 1977 to 1979, Bush joined his father’s presidential campaign in 1980. Serving with Bush on the campaign was the CIA official who gave him his in-brief at Langley in 1977, Robert Gambino, the deputy director of security at the agency. In the 1980s, Jeb Bush provided liaison between his father’s national security adviser, Donald Gregg, and various Florida-based right-wing Nicaraguan and Cuban exile organizations helping to fight the clandestine war against the Sandinista government of Nicaragua. Jeb was appointed by his father to the board of the National Republican Institute, the GOP branch of the National Endowment for Democracy (NED), the CIA-financed money laundering operation that saw millions pour into the coffers of the Nicaraguan contras, Cuban exile groups, and Salvadorean, Guatemalan, and Honduran death squads. Jeb acted as a liaison between Dr. Mario Castejon, a right-wing candidate for president of Guatemala, and Vice President Bush. Castejon sought funding for a secret shipment of arms to the contras and other right-wing rebel groups in Central America that would be masked as “medical supplies.”

Jeb Bush’s relationship with City National Bank, whose other senior director was Leonard Abess, a director of the Anti-Defamation League (ADL) Foundation, ensured that a large share of NED money flowed to Israeli security firms like Tadiran, which helped Guatemala and Honduras track down leftist guerrillas and exterminate them. Jeb Bush’s current support for Israel stems from his early business relationships with Zionists like Abess and other offshoots of the Meyer Lansky “Kosher Nostra” crime family in south Florida. Abess is currently a member of the Federal Reserve Bank branch of Miami. [See linked article below in "Summary" on pre-9/11 Fed money movement to Fed branch in Miami]. 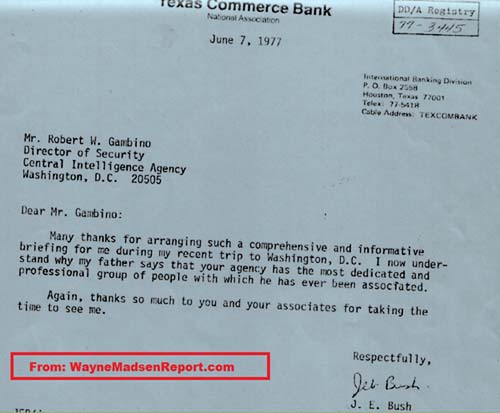 Jeb's thank you letter to Gambino after his 1977 CIA in-briefing at Langley. Texas Commerce Bank was owned by the family of James Baker, an early George H W Bush adviser as well as close friend.

It could be argued that Jeb Bush, from his in-brief by Gambino at the CIA in 1977, to his unsuccessful run for governor of Florida in 1994 was a reliable CIA and Israeli asset. In 1990, Jeb urged his father to pardon Cuban terrorist Orlando Bosch, a man wanted for the 1976 bombing of a Cuban civilian passenger plane that had taken off from Bridgetown, Barbados. Jeb Bush was also a supporter of the U.S. House of Representatives candidacy of Ileana Ros-Lehtinen, one of the most rabid anti-Castro and pro-Israeli members of Congress. Jeb also succeeded in having his father name Dexter Lehtinen, Ileana’s husband, to be U.S. Attorney for Southern Florida. Lehtinen permitted a number of Jeb’s friends in the Cuban and Jewish communities in southern Florida to escape prosecution for crimes ranging from drug money laundering to narcotics smuggling and contract assassinations to banking fraud.

Most of Jeb’s business friends were CIA-linked bankers. In addition to Beazley, Duque, and Abess, these included Paul Helliwell, a Miami-based lawyer and the owner of two CIA money laundering banks, Great American Bank of Miami, later bought by Nugan Hand and indicted in 1982 for drug money laundering, and Castle Bank & Trust Ltd. of Nassau in the Bahamas. Helliwell, a veteran of the Office of Strategic Security (OSS) during World War II, died at the age of 62 on Christmas Eve of 1976, just a few weeks before George H W Bush departed as CIA director. The autopsy said Helliwell died from “complications of emphysema.” Castle Bank shut down in 1977, the same year that Jeb moved to Caracas to work for Texas Commerce Bank. An affiliated bank that shared directors with Castle Bank, Mercantile Bank & Trust of Freeport, Bahamas, also suspended operations in 1977. Castle Bank, which had laundered CIA money to pay off such dictators as Marcos in the Philippines, Rafael Trujillo in the Dominican Republic, and Anastasio Somoza in Nicaragua, saw much of its revenue initially come from Nationalist Chinese drug smugglers operating out of the Golden Triangle in Southeast Asia.

In addition to Nassau, Helliwell’s Castle Bank operated out of the Cayman Islands and Panama. Among the bank’s account holders were the Pritzker family of Chicago, which owns the Hyatt Hotel chain, and the daughter of President Chiang Kai-shek of Taiwan. Between 1964 and 1975, Helliwell’s major CIA front company, Sea Supply Corporation, ran covert military operations against Cuba from Andros Island, the largest island in the Bahamas.

Jeb’s business deals also put him in close contact with two other Florida banks, Northside Bank of Miami, owned by the Cali cartel, and the Popular Bank and Trust Company, once owned by Nicaragua’s Somoza but transferred to CIA control after his assassination by Sandinista commandos in Paraguay in 1980.

After his return from Caracas to Florida in 1979, Jeb befriended the right-wing Nicaraguan community as much as he did the right-wing exiled Cubans. Much of the billions of dollars that the Somoza family stole from Nicaragua ended up in CIA-connected banks that helped finance Jeb’s many real estate and other ventures.

One of Gambino’s last acts as the CIA’s director of security was to preserve the myriad of CIA special clearance categories, including those that permitted NOCs like Jeb Bush and drug- and arms-smuggling proprietary companies and money laundering banks to flourish. The Carter administration had ordered the intelligence community to reduce its compartmented access system with over 50 code words to just five special code word compartments by July 1980. The National Security Agency and Gambino balked and the new system, code named APEX, never materialized. When Jeb’s father became vice president in 1981, APEX was scrapped for the original system, which saw the number of special compartments grow in number in order to accommodate operations that included trading weapons for hostages with Iran and covertly funding the Nicaraguan contras.

One CIA official who was alarmed over APEX was the man who CIA director George H W Bush named as deputy director for covert operations in 1976, Ted Shackley, aka the “Blond Ghost.” Shackley was an old colleague of George H W Bush stemming from his days as the station chief of JMWAVE, the Miami CIA office dedicated to overthrow Fidel Castro in Cuba. It was there that Shackley and Bush became involved with Cuban exile and mafia parties that were later tied to the assassination of President John F. Kennedy in Dallas in 1963. The “Cuba thing” was mentioned by President Richard Nixon on Oval Office tapes subpoenaed in the Watergate scandal. It is now known that the “Cuba thing” was code for the assassination of Kennedy and the CIA’s involvement in the operation. Shackley was also involved with Donald Gregg in the Phoenix assassination program in South Vietnam and Project FUBELT, the CIA operation to overthrow President Salvador Allende of Chile on September 11, 1973.

An undated TOP SECRET memo to Shackley from a CIA official whose name is redacted but believed to be Gambino provides details of Shackley and the CIA’s security division opposition to APEX. The memo states: “there is no intention of establishing under the Community Security Group responsibility for a centralized computerized data base of all SCI [Sensitive Compartmented Information] approvals. The CSG has no functional role in this area at this time, and one is planned for the future. The CIA Special Security Center’s Compartmented Information Branch is the home of the community service on special access certifications and records. They handle SPECLE . . . Any effort to upgrade the SPECLE system is years away. Further, NSA has taken no steps toward inputting their COMINT clearances.” In other words, the policy of President Jimmy Carter and his CIA director, Admiral Stansfield Turner, to limit CIA special compartments and display more accountability was being undermined by two Bush embeds in Langley, Gambino and Shackley. Shackley and Gambino were eventually forced by Turner to retire. The almost limitless penchant of the CIA to create special compartments permitted assets like Jeb Bush at the Texas Commerce Bank and Barack Obama, Jr. at Business International Corporation to evade public scrutiny as CIA employees. In a January 24, 1980 memo, to Gambino from the CIA member of the APEX Steering Group, special compartments are described as as protecting “industrial” personnel working for the CIA, NSA, and Defense Intelligence Agency.

Shackley became involved in the “October Surprise” plot by Bush and William Casey against Carter, also known as the “arms-for-no-hostages” conspiracy. Gambino joined the 1980 Bush for President and, later, the Reagan-Bush campaign. According to Jeff Stein, writing for Newsday’s July 25, 1980 issue, joining Gambino on the campaign were at least 40 other ex-CIA officers hired by Bush and Casey.

Jeb Bush’s rise to financial and political power in Florida is coupled with a trail of dead bodies, failed banks and savings and loan institutions accused of laundering money for the CIA, and dubious characters who served as CIA assets. Until Jeb Bush fully accounts for his business activities in the 1970s, 80s, and early 90s, he is actually more unfit for the presidency than his draft-dodging and AWOL status brother, George W. Bush.

This entry was posted in Elections & Voting, Special Reports. Bookmark the permalink.