A question from Afghanistan, ‘Can we abolish war?’

Hadisa, a bright 18-year-old Afghan girl, ranks as the top student in her 12th grade class. “The question is,” she wondered, “are human beings capable of abolishing war?”

Like Hadisa, I had my doubts about whether human nature could have the capacity to abolish war. For years, I had presumed that war is sometimes necessary to control ‘terrorists,’ and based on that presumption, it didn’t make sense to abolish it. Yet my heart went out to Hadisa when I imagined her in a future riddled with intractable violence.

But when Hadisa turns up at the Borderfree Afghan Street Kids School every Friday to teach the child breadwinners, now numbering 100 in morning and afternoon classes, she lays aside her doubts.

I can see her apply her inner compassion which rises way above the war that is still raging in Afghanistan.

Hadisa, like 99% of human beings, and the more than 60 million refugees fleeing from military and economic wars, usually chooses peaceful, constructive action rather than violence.

“Dear students,“ Hadisa says, “In this school, we wish to build a world without war for you.”

Her street kid students enjoy Hadisa’s teaching. What’s more, away from the rough and unpredictable streets of Kabul, they find the space at the school affirming, safe and different.

Fatima, one of Hadisa’s students, participated in the very first street kids’ demonstration in Kabul demanding a school for 100 street kids. In subsequent actions, she helped plant trees and bury toy weapons. In another two days, on the 21st of September, the International Day of Peace, she will be one of 100 street kids who will serve a lunch meal to 100 Afghan labourers.

“In place of war,” Fatima learnt, “we will do acts of kindness.”

This action will launch #Enough!, a long-term campaign and movement initiated by the Afghan Peace Volunteers to abolish war. 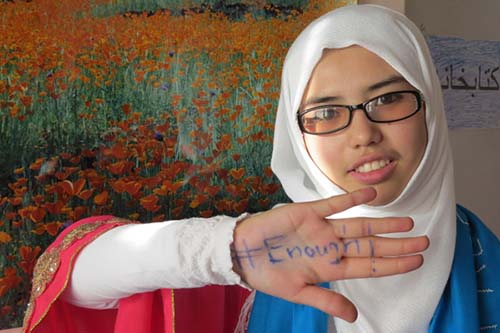 If the street kids were taught erroneous ways, and became ‘terrorists,’ would the solution be to eventually ‘target and kill’ them?

I couldn’t bear to think of it, and am more and more convinced, like Hadisa and the Afghan Peace Volunteers, that killing those labeled ‘terrorists’ by waging war against them doesn’t work.

War and weapons don’t heal the root causes of ‘terrorism.’ If our brother or sister was violent, we wouldn’t think of killing them to reform them.

I was in the class when the question was first posed to the street kids: “To whom would you wish to serve a meal?” Hands went up like love and hope blooming for the new Afghan generation, and Habib, an older street kid who was Hadisa’s student last year, echoed along with many others, “The labourers!”

I felt immensely moved, having seen a definite glimmer of our human capacity to care for others, rather than exercise hate, discrimination, indifference or apathy.

Friday, Habib helped his volunteer teacher, Ali, to invite labourers to Monday’s meal. As I filmed and photographed Habib taking down the names of Afghan men much older than him, I felt renewed faith in our human ability to do good, and a warm, tender feeling overwhelmed me. 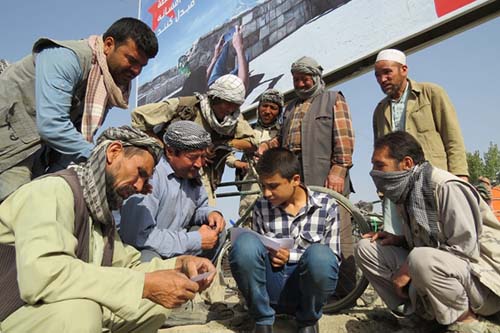 Habib, with pen and paper, making an invitation list of 100 Afghan labourers with whom he and other Afghan street kids will share a meal. (Photo by Dr. Hakim)

With people like Hadisa, Fatima, Habib and the many wonderful young Afghans I’ve met, I know that we can abolish war.

For their sake and the sake of human kind, we should work together with much patience, and all of our love.

In 1955, after two world wars and the loss of at least 96 million people, Bertrand Russell and Albert Einstein wrote a Manifesto, saying, “Here, then, is the problem which we present to you, stark and dreadful and inescapable: Shall we put an end to the human race; or shall mankind renounce war?”

After finishing the invitations, as we were walking along the very streets where Habib used to take the weight of pedestrians to earn some income for his family, I asked him, “Why do you want to end war?’

Dr Hakim, (Dr. Teck Young, Wee) is a medical doctor from Singapore who has done humanitarian and social enterprise work in Afghanistan for the past 10 years, including being a mentor to the Afghan Peace Volunteers, an inter-ethnic group of young Afghans dedicated to building non-violent alternatives to war. He is the 2012 recipient of the International Pfeffer Peace Prize.