Is the pope a conspiracy believer?

In his September 24 address to a joint session of the U.S. Congress, Pope Francis I named four “great Americans” who he believes had a significant impact upon the world: Abraham Lincoln; Martin Luther King, Jr.; social activist Dorothy Day; and Thomas Merton. Most people have heard of the first three. But who was Thomas Merton? 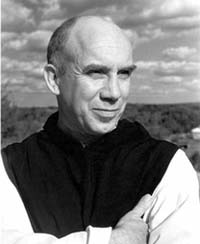 Father Thomas Merton: coiner of the term "The Unspeakable" to describe the deep state's crimes against popular leaders.

Merton was a Trappist monk who advocated interfaith dialogue. Merton’s 20th century writings on ecumenicalism and dialogue in a current era of sectarian violence have a special meaning for the pope. Merton was also a leading peace activist who served as a mentor for anti-Vietnam war priests Philip and Daniel Berrigan.

However, it is Merton’s coining of the phrase “The Unspeakable” that should have perked up the ears of those who do not believe the official theories about the assassinations of President John F. Kennedy, Reverend King—who the Pope cited as one of his four greatest Americans—and Robert F. Kennedy. Merton’s 1966 book, Raids on the Unspeakable delved into the plots that many Americans were afraid to mention in public.

Merton believed that included among “the Unspeakable” crimes of the 1960s were the interwoven murders of the two Kennedys and King. In other words, Merton was a conspiracy realist at about the same time the Central Intelligence Agency came up with the pejorative term “conspiracy theorist” to describe those, including Merton, who questioned the official stories on political assassinations and the reasoning behind America’s entry into the Vietnam War.

Merton wrote in his book that The Unspeakable “is the void that contradicts everything that is spoken even before the words are said, the void that gets into the language of public and official declarations at the very moment when they are pronounced, and makes them ring dead with the hollowness of the abyss.”

Author Jim Douglass picked up on Merton’s theme in his detailed work on the assassination of John F. Kennedy, titled JFK and the Unspeakable: Why He Died and Why It Matters.

Pope Francis has taken on many powerful and secretive enemies since becoming pontiff. He has elected to live in a guest apartment in the Vatican and not the official papal quarters, the scene of many intrigues of the past, including the questionable 1978 death, some would call it an assassination, of Pope John Paul I on the 33rd day of his papacy. Was Francis sending us all a message in his praise of Merton? The Washington Post, in its coverage of Francis’s speech and his reference to Merton, made no mention of Merton’s strongly-held belief in wider conspiracies surrounding the assassinations of JFK, RFK, and MLK. This should come as no surprise since, historically, the Post has been a major element in the cover-ups of the three state-sanctioned and state-sponsored murders.

At the height of the Vietnam War, in 1968, Merton attended an interfaith meeting between leading Catholics and Buddhists near Bangkok. Merton had become quite an expert on Jainism, Sufism, Hinduism, and Taoism and, especially, the Buddhist religion. Merton established close contacts with the Dalai Lama and other leading Tibetan Buddhists.

On December 10, 1968, Merton is said to have been electrocuted by a faulty fan while stepping out of the shower of his guest house at the conference venue some 30 miles south of Bangkok. Merton’s death at the age of 53 is clouded in mystery, with some accounts saying he was electrocuted and others claiming he died of a heart attack. When Merton’s body was discovered, there were severe electrical burns across the torso. Witnesses reported voice coming from Merton’s room shortly before his death. The Thai coroner’s report stated the following about Merton’s death: “death was caused as a result of fainting—due to acute cardiac failure.”

Many of Merton’s associates believed that the priest was assassinated by the Central Intelligence Agency in yet another “Unspeakable” crime. The CIA was concerned about Merton’s ties to Buddhist leaders in Asia and saw it as a threat to the U.S. war efforts in Indochina.

Merton’s mail and phone calls were also being intercepted by J. Edgar Hoover’s FBI, including a 1958 letter from Merton to Soviet author Boris Pasternak, author of Dr. Zhivago. Declassified files also show that Merton was under surveillance by the Air Force Office of Special Investigations (OSI) and the Office of Naval Intelligence.

Oddly, Merton’s body was flown back to the United States on board a U.S. Air Force transport plane that was diverted to Bangkok from South Vietnam, before it was to fly the bodies of dead U.S. troops home to America. There was never any rational explanation as to why Merton, a lifelong pacifist and anti-Vietnam war protester, was flown back to America on a military cargo plane involved in the on-going slaughter in Southeast Asia.

Was the pope sending America a message that he considers Merton’s warnings about state-sponsored assassinations a subject worthy of further discussion and research? And was Francis sending us all a cryptic message that his own life may be in danger from sinister forces just as was Merton’s?

The fact that no major news organization has reported on Merton’s beliefs about three major U.S. political assassinations, as well as Merton’s own questionable death, may be the only proof that is necessary that the pope was indeed sending us a message, one that was systematically ignored by the intelligence community-controlled corporate media.

The day after speaking to Congress, the pope visited Ground Zero in New York. One can only wonder what words written by Thomas Merton were going through the pontiff’s mind as he reflected back on the events of September 11, 2001. Indeed, were those words “The Unspeakable?”

3 Responses to Is the pope a conspiracy believer?