The real scandal surrounding Democratic presidential hopeful Hillary Clinton’s private email system may be that she was running, in concert with a private consulting firm tied closely to George Soros, an outsourced and parallel State Department answerable only to her and not President Obama, the Congress, or the American people.

The media have tried to separate two dubious operations of Mrs. Clinton while she was at the State Department. The first is the private email server located in her Chappaqua, New York residence. The second is the fact that her government-paid State Department personal assistant, Huma Abedin, wife of disgraced New York “sexting” congressman Anthony Weiner, was simultaneously on the payroll of Teneo, a corporate intelligence firm that also hired former President Bill Clinton and former British Prime Minister Tony Blair as advisers. Abedin has been linked to the Muslim Brotherhood, which has recently buried the hatchet with longtime rival Saudi Arabia and made common cause against the Assad government in Syria, the Houthi rebels in Yemen, and Iran.

It is clear that Mrs. Clinton used her private email system to seek advice on major foreign policy issues, from her friend and paid Clinton Foundation adviser Sidney Blumenthal providing private intelligence on Libya’s post-Qaddafi government and possible business ventures to Clinton friend Lanny Davis seeking favors from Mrs. Clinton. It should be noted that Davis was a paid lobbyist for the military junta of Honduras that overthrew democratically-elected President Manuel Zelaya in 2009. It also should be noted that Mrs. Clinton voiced her personal dislike for the late Libyan leader Muammar Qaddafi, when, after he was assassinated by U.S.-armed jihadist rebels, boasted, “We came, we saw, he died!”

It was highly unusual for Abedin to receive a U.S. government paycheck while also receiving a consultant’s salary from Teneo. Teneo was founded in 2011 by Doug Band, a former counselor to Bill Clinton. Teneo, which is as much a private intelligence firm as it is an investment company and “governance” consultancy, has its headquarters in New York and branches in Washington, DC; Brussels, São Paulo, London, Dublin, Dubai, Hong Kong, Beijing, and Melbourne. With the exception of its investment arm, Teneo closely resembles the former CIA-connected firm where Barack Obama worked after he graduated from Columbia, Business International Corporation (BIC). Teneo’s marketing claims match those made by BIC during its heyday: Teneo works “exclusively with the CEOs and senior leaders of many of the world’s largest and most complex companies and organizations.”

Teneo has staked a position in the international news media with its recent purchase of the London-based firm Blue Rubicon, formed in part by the former home news editor for Channel 4 News in the United Kingdom. Teneo also recently acquired London’s Stockwell Group, which provides consultancy services to the National Bank of Greece and Pireaus Bank. It appears that Mrs. Clinton’s friends are cashing in on the global banking austerity being levied against Greece.

The head of Teneo Intelligence is Jim Shinn, a former assistant secretary for Asia for the Defense Department. What is troubling is that Teneo has been offering statements to the media designed to heighten tensions between NATO and Turkey on one side and Russia on the other over Russia’s military attacks on the Islamic State in Syria. Shinn’s intelligence chief in Teneo’s London office, Wolfgango Piccoli, who has worked for the Soros-linked Eurasia Group consultancy, told CNN that Russia’s “reinforcement of the Assad regime and the consolidation of separate areas of control is more likely to prolong the conflict by forcing a stalemate.” The Teneo statement came in a CNN report that suggests members of the Bashar al Assad government in Syria and Russian President Vladimir Putin and his government could be charged by international or “national” tribunals for war crimes in a manner similar to those convened on members of the Yugoslavian and Serbian governments. 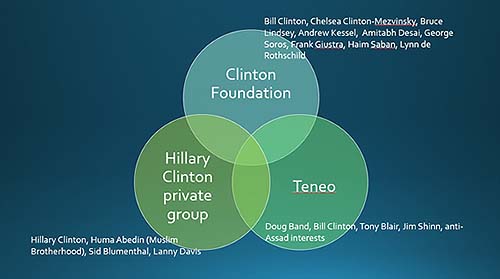 The entire International Criminal Court (ICC) in The Hague and in Africa has fallen under the control of George Soros and his operatives. Soros has made no secret of his support for overthrowing Assad and Putin and he has resorted to a “weapon of mass migration” of Syrian, Iraqi, and other refugees into Europe in order to destabilize the entire continent and endanger its Christian culture and social democratic traditions. Mrs. Clinton and Soros extensively used Mrs. Clinton’s private email system to exchange, among other things, information on the political situation in Albania, a country where Soros’s operatives are plentiful and powerful. Soros is a major donor to the Clinton Foundation and Mrs. Clinton’s presidential campaign.

Soros also pressed Mrs. Clinton for State Department support for his American University of Central Asia, which, as seen with Soros’s Central European University in Budapest and its graduate ranks of pro-U.S. leaders throughout central and eastern Europe, is designed to manufacture a new generation of pro-U.S. leaders in the Central Asian states of the former Soviet Union.

The “wiping” of Mrs. Clinton’s email systems’ hard drives appear to be part of a classic case of an intelligence operation destroying data after being exposed.

One of the emails sent via Mrs. Clinton’s private system was from her State Department counsel Cheryl Mills to Amitabh Desai, the head of foreign policy for the Clinton Foundation. Mills wanted Desai to arrange a meeting between Rwandan dictator Paul Kagame with the Democratic Republic of Congo strongman Joseph Kabila during Kagame’s visit to Kinshasa in 2012. This effort was conducted outside the State Department with the sole exception that Assistant Secretary of State for African Affairs Johnnie Carson, a close friend of Mrs. Clinton, was involved in the email exchange with Mills and Desai.

Other private email use involved Hollywood magnate Haim Saban, Loews heir Andrew Tisch, and Lynn de Rothschild, all of whom were peddling Israel’s interests to Hillary and Bill Clinton in return for sizable donations to the Clinton Foundation and Mrs. Clinton’s presidential campaign.

Under the Clinton Giustra Enterprise Partnership, the Clinton Foundation received generous financial support totaling some $31 million from Frank Giustra, a Canadian uranium mining magnate. Giustra relied on the Clintons to use their influence to open up lucrative uranium exploitation opportunities in places like Kazakhstan and Africa.

Senator Chuck Grassley (R-IA) has been stonewalled in his attempt to obtain more information about Teneo’s relationship with Mrs. Clinton, the Clinton Foundation, and Bill Clinton.