Turkey has repeatedly charged that Russian military aircraft flying sorties over Syrian airspace against the Islamic State of Iraq and the Levant (ISIL) have violated Turkish airspace over the province of Hatay.

Hatay is the curious geographical outcropping of Turkish territory that juts from Anatolia into the eastern shoreline of the Mediterranean to the west of Syria. If it appears that Hatay should actually be part of Syria, it once was, that is, before the Turkish government annexed the territory in 1939 in a raw deal worked out with France. Hatay was long forgotten, that is, until 1989 when the film «Indian Jones and the Last Crusade» featured, in part, the State of Hatay as it existed in the late 1930s. However, Hollywood mistakenly referred to Hatay as a sultanate and created for it a fake flag.

NATO, without submitting anything in the way of proof, charged that Russian Sukhoi Su-30s and Su-24s violated Hatay’s «sovereign» airspace on at least three occasions from the first week of October to the middle of the month.

However, many Syrians believe that Turkey has been violating Syrian sovereignty over what the Syrians refer to as Alexandretta since 1939. After the fall of the Ottoman Empire following the First World War, Alexandretta, which was part of the Aleppo Province of the empire, became a separate entity but ruled by Paris as part of the League of Nations’ French mandate of Syria as a result of the Franco-Turkish Treaty of 1921. Known as the autonomous Sanjak of Alexandretta, the area was administratively governed as part of the French-ruled State of Aleppo and in 1925 it became part of the new French state of Syria but, in recognition of its large Alawite, Turkish, and Armenian communities, retained its autonomous status. Alexandretta also had communities of Assyrians, Syriac Orthodox, Greek Orthodox, Maronites, Greeks, Greek Catholics, Kurds, and Jews. There were four other states under the French mandate of Syria: Arab Syria, largely occupied by Sunni Arabs, Kurds, and Turkoman; Latakia, the coastal region dominated by Alawites and Christians; Lebanon, which was then largely Christian; and the southern region largely inhabited by the nomadic Jebel Druze. 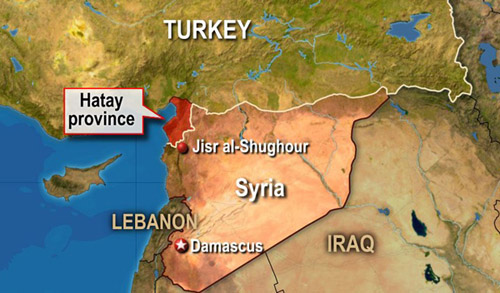 The Syrian civil war, instigated by the West, Saudi Arabia and its Gulf allies, Turkey, and Israel, has played upon the old religious and ethnic fracture lines of the old League of Nations mandate to further their own agendas. However, by opening the Syrian can of worms, Turkey has also turned attention toward dormant claims by Alexandretta, now the Hatay province of Turkey, for retrocession to Syria.

Turkish leader Kemal Ataturk never recognized French-Syrian control of what the Turks insisted on calling Hatay. Ataturk made an astounding claim that Alexandretta was a Turkish homeland for 40 centuries even though it was also longtime homeland for a number Syrian Alawites, Arabs, Melkite Christians, Armenians, Kurds, Circassians, and Jews. Moreover, the Seljuk Turks had only occupied Alexandretta in 1096. The Seljuk Turkish occupation of the region ended three years later when Christian crusaders led by European princes conquered Alexandretta.

The Syrian Arabs of Alexandretta wanted nothing to do with becoming part of Turkey. Syrian nationalist leader Zaki al-Arsuzi, one of the inspirational leaders of the Arab Ba’ath Party, which would later come to rule both Syria under Hafez al-Assad and his son, current president Bashar al-Assad, and Iraq under Saddam Hussein, began to call for Alexandretta’s independence from France and union with Syria. In 1936, the French and Turks concluded an agreement whereby Turkey would recognize the eventual independence of Syria, which would include the Sanjak of Alexandretta. However, Ataturk raised the status of Alexandretta before the League of Nations and claimed that because the majority of its population was Turkish—which, at 39 percent of the population, was another falsehood from Ataturk—the Sanjak should be separate from an independent Syria.

The Armenian community surrounding Alexandretta, fearing the Turks who had already engaged in a wholesale genocide of the Armenian people from 1915 to 1922, declared the Republic of Amanus and asked France for recognition. France ignored the Armenians. The French, Americans, British, and other World War I allies also ignored the plight of the Armenian, Greek, Maronite, and other minority communities of Cilicia, along the Mediterranean coast of Anatolia, who found themselves besieged by the extreme nationalism of Ataturk’s Young Turk movement.

France agreed that Alexandretta would maintain its autonomous status as part of Syria after Syrian independence but rejected Turkish demands that the region be granted separate independence, obviously with the goal of then incorporating the mini-state into Turkey. The League of Nations appointed a special committee, with French and Turkish members, to hammer out an agreement on Alexandretta.

The committee agreed that Sanjak would retain autonomy over its internal affairs, Syria would have responsibility for the Sanjak’s foreign affairs; the Sanjak and Syria would have the same monetary system; Syria and Alexandretta would appoint commissioners to represent each entity in their respective capitals—Damascus and Antioch; Alexandretta would be completely demilitarized and only a police force would be maintained; the rights of all minorities with respect to race, religion, language, and nationality would be guaranteed; Turkey would have special rights in the port of Alexandretta and a separate customs zone; Arabic and Turkish were recognized as official languages; a unicameral legislature would be established with 40 members who would elect a president and an executive council; and freedom of the press and elementary education were guaranteed.

After the agreement, Christian and Muslim Arabs, as well as Armenians, immediately took to the streets in rioting to protest Turkish being adopted as an official language. In a fashion popular at the time with Nazi Germany with regard to its neighbors with German minorities, Turkish troops were deployed to the northern border of Alexandretta and Turkey began to officially complain about the treatment of Turks in the Sanjak. In 1937, as French authorities were registering voters in Alexandretta for forthcoming elections, Turkey abrogated its 1926 no-aggression treaty with the Syrian mandate. Al-Arsuzi and his Syrian nationalists claimed there was no Turkish majority in Alexandretta, that its numbers were only 85,000 compared to 100,000 Arabs and Armenians. After a French census, it was agreed that Turks would have 22 of the 40 seats in the legislature.

In what can only be described as a double-cross of the Syrians, the French agreed to permit Turkey to station troops in Alexandretta to maintain «order» and an agreement was signed between Paris and Ankara that recognized Turkey’s special status in Alexandretta.

After elections were held in 1938, a former member of the Turkish National Assembly was elected President of the Sanjak of Alexandretta, which he immediately changed to the Republic of Hatay in recognition of the Hittite, and thus, Turkish, claim over the territory. The Turkish president declared the capital to be in Antakya (not Antioch as it was known to the majority of the population). The flag of Hatay was proclaimed to be a white crescent and star on a red field, the same as that of Turkey. The official policy of the Hatay government was to be «Kemalism».

A 1939 Franco-Turkish mutual assistance treaty sealed Alexandretta’s fate. In order to ensure that Turkey did not join with the Axis Powers, France ceded sovereignty of Alexandretta to the Turks. The rights of the majority non-Turks in Alexandretta, particularly the Armenians and Kurds, were systematically discarded by the French mandate authorities over Greater Syria. Part of the friction today that exists between the Baathists of Syria and the neo-nationalists of Erdogan stems directly from the abandonment of Alexandretta to the Turks by the French in 1939. Even if Russian planes overflew Hatay, it demonstrates that Syria and its allies have not forgotten the perfidy that led to Alexandretta’s illegal seizure by the Turks.

Essentially, the Alawites and other minorities who now live in Hatay have good cause to demand retrocession back to Syria. The Turks falsely claim that the Alawites, Circassians, and Kurds who live in Hatay are ethnic Turks, a hyper-nationalist claim rejected by all three groups. Some official Syrian government maps still show Alexandretta as part of Syria. The Turkish-supported Syrian opposition have printed maps showing no separate status for Hatay but showing it as part of Turkey.

If Syria is divided between a Sunni-dominated interior and a Latakia-based Alawite-Christian coastal entity, Hatay, if joined to Latakia, would give the new country a fighting chance for survival in a dangerous environment of Turkish nationalist adventurism. And a final footnote for a Turkey that has covertly pushed for the Islamic State’s self-proclaimed caliphate. If ancient history is to be revived, Christian claims to Cilicia and Constantinople can also be revived. If there is a place for an Islamic State in the world of Erdogan and his cronies, so too, can there be a place for a revived Byzantium and the reopening of the Hagia Sophia in Istanbul as the holy see for eastern Christianity.