The candidate's latest round of Muslim bashing is a reminder of Sinclair Lewis' book about fascism in America and the danger of an ill-informed public.

Reading the coverage of Donald Trump’s latest philippic calling for the prohibition of Muslims traveling to the United States, I noted that some reporters and commentators mentioned Sinclair Lewis’ 1935 novel, “It Can’t Happen Here,” his imagining of a United States taken over by a fascist dictator.

That reminded me of a piece I wrote for the Bill Moyers Journal website five years ago. Substitute Trump for the names of right-wing circus barker Glenn Beck or Lewis’s fictional “Buzz” Windrip and the essay becomes freshly and frighteningly relevant. Fascism with a human face is back. Read on.—Michael Winship

The Awful Price for Teaching Less Than We Know

Watching Glenn Beck’s performance Saturday at his “Restoring Honor” rally in Washington, DC, I thought of the novelist Sinclair Lewis’ Elmer Gantry, the charlatan evangelist who seduces most of those around him with his hearty backslapping and false piety.

Then I realized it wasn’t Gantry of whom I was reminded so much as another Lewis character, Berzelius “Buzz” Windrip, the politician who poses as a populist, then once elected president turns the United States into a fascist dictatorship, aided by an angry, unknowing electorate and a paramilitary group called the Minute Men. 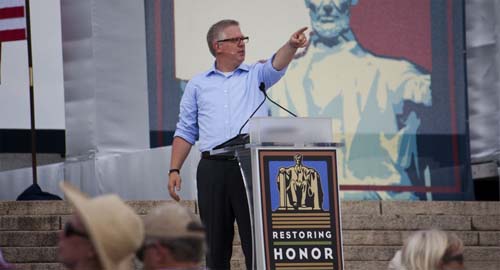 Read how Sinclair Lewis described Windrip seventy-five years ago in his novel It Can’t Happen Here and think Beck: “He was an actor of genius. There was no more overwhelming actor on the stage, in the motion pictures, nor even in the pulpit. He would whirl arms, bang tables, glare from mad eyes, vomit Biblical wrath from a gaping mouth; but he would also coo like a nursing mother, beseech like an aching lover, and in between tricks would coldly and almost contemptuously jab his crowds with figures and facts—figures and facts that were inescapable even when, as often happened, they were entirely incorrect.”

Entirely incorrect. In its despair and confusion, a large segment of the American populace is prepared to believe anything it’s told, in part because we are a country less and less educated, increasingly unable to tell fact from fiction because we are so unschooled in basic essential knowledge about America and the world.

I remembered a conversation my friend and colleague Bill Moyers had with journalist and author Susan Jacoby on Bill Moyers Journal in 2008, just after the publication of her book, The Age of American Unreason.

She cited a 2006 National Geographic-Roper Survey: “Only 23 percent of college-educated young people could find Saudi Arabia, Iraq, Iran and Israel, four countries of ultimate importance to American policy on the map—a map, by the way, that had the countries lettered on it. So in other words, it wasn’t a blank map, [which] meant they didn’t really know where the Middle East was either . . . If only 23 percent of people with some college can find those countries on a map that is nothing to be bragging about. And that has to have something to do with why, as a country, we have such shallow political discussions.”

It’s not much of a leap from there to the Pew Research Center survey earlier this month reporting “nearly one-in-five Americans (18%) now say Obama is a Muslim, up from 11% in March 2009. Only about one-third of adults (34%) say Obama is a Christian, down sharply from 48% in 2009.”

The jump in the “Obama is a Muslim” numbers is sharpest among Republicans (and a new Newsweek poll finds a majority of Republicans also believe that it’s “definitely” or “probably” true that “Barack Obama sympathizes with Islamic fundamentalists who want to impose Islamic law around the world”). But as New York Times blogger Timothy Egan noted in an entry headlined, “Building a Nation of Know-Nothings,” it’s “not just that 46 percent of Republicans believe the lie that Obama is a Muslim, or that 27 percent in the party doubt that the president of the United States is a citizen. But fully half of them believe falsely that the big bailout of banks and insurance companies under TARP was enacted by Obama, and not by President Bush.”

Back when Moyers spoke with Susan Jacoby about “the ignorance and erosion of historical memory that makes serious deceptions possible and plausible,” she cited as an example that, “If we don’t know what our Constitution says about the separation of powers then it certainly affects the way we decide all kinds of public issues.”

Is it any wonder that many Tea Partiers are equally unknowing of the fact that much of their grass roots movement is bankrolled by fat cats with ulterior motives like billionaire libertarians David Koch and his brother Charles?

According to a survey conducted last year by The American Revolution Center, a non-partisan, educational group, more than half of American adults “mistakenly believe the Constitution established a government of direct democracy, rather than a democratic republic,” a third don’t know that the right to trial-by-jury is guaranteed by the Bill of Rights and “many more Americans remember that Michael Jackson sang ‘Beat It’ than know that the Bill of Rights is part of the Constitution.” (Sixty percent knew that reality TV’s Jon and Kate Gosselin had eight kids but more than a third did not know that the American Revolution took place in the 18th century.)

So is it any wonder that many Tea Partiers are equally unknowing of the fact that much of their grass roots movement is bankrolled by fat cats with ulterior motives like billionaire libertarians David Koch and his brother Charles, who, as a former associate told The New Yorker’s Jane Mayer, seems to have “confused making money with freedom?” Or that continuing tax cuts for the rich while supporting deficit reduction are inherently incompatible concepts? Or that raging Islamophobia plays right into the hands of radical terrorists who use our bigotry to incite and recruit? Or that Glenn Beck just says whatever craziness pops into his head?

“It’s one thing to forget the past, with predictable consequences, as the favorite aphorism goes,” Timothy Egan wrote on the Times website. “But what about those who refuse to comprehend the present?”

Years ago, I attended a rally protesting government cuts in funding for education and the arts. One of the speakers suggested that we boomers may be the first generation to teach the next generation less than we know. That often-willful ignorance may turn out to be our final, fatal mistake, the greatest American tragedy of all.

Michael Winship, senior writing fellow at Demos and president of the Writers Guild of America-East, was senior writer for Moyers & Company and Bill Moyers’ Journal and is senior writer of BillMoyers.com.