A swollen river of refugees 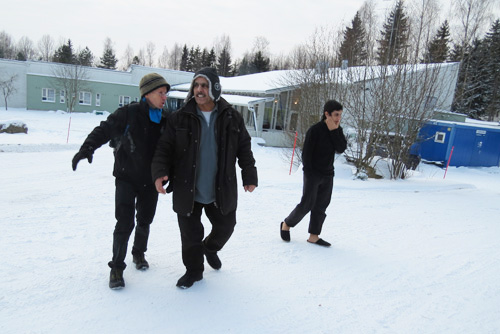 The author, Mohammad and Omar at a Finnish camp for asylum seekers, January 2016.

Last month, as US border patrol agents began rounding up Central American women and children denied asylum, a small group of international peace activists from Voices for Creative Nonviolence boarded a plane for Helsinki, Finland, to visit two longtime Iraqi friends who fled Baghdad last summer and somehow completed a perilous seven-week journey over land and sea to reach this northern seaport. Negotiating our way from the airport in Helsinki to Laajasalo, a small island and suburb where we were to stay with a Finnish journalist, we crossed a frozen and snow-covered Baltic Sea, as white flakes swirled in the streetlights and the temperature dropped to minus 25 degrees Celsius, a long, long way from Baghdad.

Our friends Mohammad and his teenage son, Omar, come from a small farming village where they grow okra. Last autumn, like hundreds of thousands of others, they were part of the swollen river of refugees whose headwaters sprang from Syria, Iraq, and Afghanistan, where endless war has devastated society and local violence has left so many people at grave risk. The journey to Europe is not merely a long, exhausting trip. It is treacherous from the start.

To begin with, while leaving their country of origin, people risk their lives traveling through contested parts of their country or over roads controlled by militias or warlords known to capture and kill people of their ethnicity or religious sect. Risks, we can be sure, they wouldn’t undertake except out of desperation. All of this merely to enter Turkey. In Istanbul, where refugees must try to find a trustworthy smuggler, make a deal with one of his agents, and pay a hefty fee—held in a sort of escrow until a specific, agreed-upon part of the trip is completed—Turkish police patrol the streets and coffee houses looking for migrants. Iraqis are particularly at risk. If captured in Turkey and identified, they are imprisoned and eventually turned over to Iraqi authorities. And in the charged, sectarian atmosphere in Iraq, refugees shudder to think what might follow.

From Turkey, Mohammad and his son planned to travel by bus to a port town—“Well, it’s not really a town, just a place at the beach”—and launch a rubber dinghy onto the Aegean Sea at night. Their hope was to reach Farmakonisi, a tiny, largely uninhabited Greek island five and three quarter miles from the Turkish coast.

Leaving Istanbul is itself like crossing open seas. It involved a nine-hour bus trip. The first trick is getting on the bus without being captured by police, and then again eluding police while traveling out of the city. No small feat. This isn’t a tourist bus or a standard bus route where you gather with other passengers trying to blend in at a regular, authorized location. It’s an empty mini-bus into which twenty refugees cram themselves and their luggage all at once. Not an easy thing to hide. “The bus,” Mohammad told us, “will wait 2 minutes. No more.” Of course, people are anxious and on edge. He described three failed attempts to successfully leave Istanbul. In one attempt, the smuggler’s agent assigned a meeting place, then changed it four times over the next couple of hours, until the group, which included women and young children, crouched in the dark on the edge of a wood, looking down a dirt path to a street corner where, at a specified time, the bus was supposed to appear.

According to the smuggler’s agent’s directions, a phone call would alert the refugees that the bus was approaching the appointed pickup spot. In the meantime, they should organize themselves into four sub-groups of twenty people, the first sub-group dashing out when the first bus appears. By this point, however, and despite the best efforts of Mohammad and other group leaders, such discipline was beyond them. Sleep-deprived, frightened, and hungry, too many people ran out, and the mini-bus fled without boarding anyone, forcing the smuggler’s agent to reschedule the attempt for another day and leaving the refugees with nothing to show for their effort but an unfulfilled promise.

On another attempt, the refugees successfully boarded only to be spotted by police as they left the city. Two of the four buses were apprehended. In the third bus, Mohammad and Omar watched as their driver swerved recklessly around the police and drove breakneck down the road. “He has to do this,” Mohammad explained. “For him it is life or death because it is a twenty-year prison sentence if you are caught.” In the end, this attempt also failed, when the group was rounded up by police after being delivered to the beach. Mohammad describes what happened:

After a long wait, some tourists came down the side of the hill and saw women and children lying in the woods, and we were afraid they will tell the police. We could see police boats on the water, and hear their sirens. Eventually a Turkish man came and questioned us, we told him the truth, he said ‘ok, don’t worry,’ and he brought water and some biscuits. Another Turkish man came and said everyone should gather in one place. This was suspicious. Then suddenly the police opened fire, we hear the sound of bullets. Some young people run toward sea and start swimming, some run away into the woods. The police say they will keep us until everyone is here. The young people are captured, and we are taken back to Istanbul and held in jail for questioning. They hold us for six days, but they accept that the Iraqis in our group are Syrians and they let us go.

After this, Mohammad and his son spent two weeks in Istanbul, resting, thinking, planning, gathering their strength for another attempt. “Almost everyday in the coffee shops, we hear stories about people drowning [trying to cross the Aegean Sea], but we try to ignore this because we don’t want our motivation to weaken. This is why I waited two weeks to make the crossing, some people only wait a couple of days, but I am very careful, questioning the smuggler, asking his agent questions. Where is your crossing? Where do you land? . . . I saw that there were more women and children than men refugees, and this made me strong. They inspired me. If they can face death, I can too.”

Finally, on the fourth attempt, they succeeded. (“This time, we left during the day, and the police were right there. So we believe bribes were paid”). A nighttime sea crossing was set, and Mohammad, a mechanical engineer by training, agreed to pilot. The trip was harrowing, with the boat overloaded and passengers frantic, Turkish police on the waters, and navigation a literal shot in the dark. “I never drove a boat before . . . My son and I can’t swim. I believed we would die, but I thought, if I am going to face death, then I will face it carefully . . . Thank God we made it.”

On Thursday, January 21, at least forty-three refugees, including seventeen children, died when their boats capsized while trying to cross the Aegean Sea. One of the boats was headed to Farmakonisi.

It is two hundred twenty-five miles in a straight line across the sea from Farmakonisi to Athens. Before reaching the Greek capital, Mohammad and Omar had to travel to other small Greek Aegean islands, waiting on one for almost a week, with little food. “Everyday more refugees landed . . . the good thing is that I was able to beg some food for Omar, a bit of bread, a few dates . . . he was losing strength.”

Travel time by air from Athens to Helsinki is about six and a quarter hours, including a Munich layover. If you count the layover in Munich, the trip increases to six and a quarter hours. For Mohammad and Omar and those they met traveling overland, it took weeks, with the borders opening and closing like jaws before and behind them.

As a young man in Iraq, Mohammad had few chances to use his professional training. Following on the heels of a costly eight-year war with Iran (a conflict in which the US participated in a number of ways, including providing weapons to both sides), Iraq’s economy collapsed under the weight of international economic sanctions. In 1993, Mohammad began working for a French NGO to provide medical relief to Baghdad’s malnourished children, a job that brought him a good deal of unwanted attention from Iraq’s intelligence services. It was work as a journalist for foreign media that brought the death threats that forced Mohammad and his family to flee their Baghdad home and go into hiding. Continued threats, the murder of his brother by a Shia militia, and the kidnapping and murder of his father forced him and Omar to flee their country. Omar’s mother and his six younger siblings remain in Iraq, waiting for the chance to reunite with Mohammad and Omar in Finland.

On an evening toward the end of our visit, Mohammad and I walked from the bus stop to our apartment. Snow danced lazily in the air. Without preamble, speaking thoughts that carried him from Baghdad to Finland, Mohammad said, “I came here because of my children. If I stay in Iraq, they will kill me. And what will happen to them in such a society?”

In the silence that followed, his words rose into the air and joined the dance.

David Smith-Ferri is a member of Voices for Creative Nonviolence (www.vcnv.org) and the author, most recently, of Where Days Are Stones, Afghanistan and Gaza Poems, 2012–2013. He recently returned from a VCNV delegation to Helsinki, where he visited with Iraqi friends who fled their country and are seeking asylum in Finland. He can be reached at dsmithferri@gmail.com.