Boots on the ground for public schools

In the midst of a presidential campaign circus, parents and teachers try to put the focus on state lawmakers—and kids. 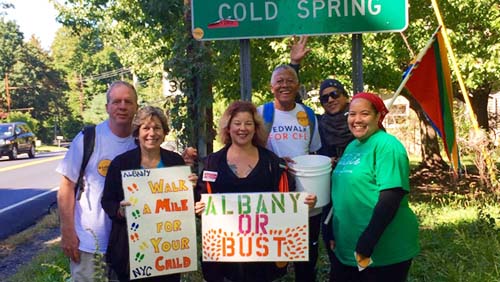 Ed Walk marchers stopping on their way to Albany. (Photo by Sarah Jaffe)

The shoulder on Highway 9D between Garrison and Cold Spring, New York, is nearly nonexistent in places, and if you attempt to walk side-by-side your pant leg will get covered in burrs.

I learned this on Wednesday, when I joined some 20 marchers on their way from New York City to Albany in pursuit of education funding promised a decade earlier. “We’re walking so we can be heard,” Mindy Rosier, a special education teacher, told me. She carried a handwritten cardboard sign reading, “Albany or Bust,” and like most of the other parents, students and activists on the march, wore a bright orange safety vest. As we walked, cars honked and drivers waved; people we passed on the sidewalks of Cold Spring darted out to ask what the march was for and gave a thumbs-up when the answer was, “Public schools!”

Wending its way mostly single-file for 150 miles along city streets and narrow upstate highways, the #EdWalk is retracing the steps taken by education activists involved with the Campaign for Fiscal Equity lawsuit, which in 2006 culminated in a New York State Court of Appeals ruling that the state had violated students’ constitutional rights to a “sound and basic education” by inadequately funding the schools.

The court ruled that schools should receive $5.5 billion more in what’s known as foundation aid, but 10 years later, that money has yet to arrive and schools like the one where Rosier teaches in Harlem are struggling. On Sunday, the marchers, backed by the Alliance for Quality Education and over 70 other endorsing organizations, set out to draw some attention from the horse-race cycle of presidential campaign journalism to the real issues in their community.

Rosier’s school is located in a building with several others, including the first-ever Success Academy, the controversial charter school that has had a spate of bad press over its methods. To Rosier, sharing a building with the well-funded charter, which gets private donations as well as state dollars, leaves her and her students feeling like “the have-nots.” As Success Academy expanded, she said, her school lost its science and arts rooms; she’s watched construction teams come and go to Success Academy while her classrooms go unrepaired. Her school is owed over $600,000 in foundation aid.

At the rear of the march, Robert Jackson holds a flag and keeps time with a wooden spoon on a bucket as we walk. In the early 1990s, he was president of the school board in District 6, the northernmost part of Manhattan, frustrated by repeated cuts and layoffs. “Parents were dropping their kids off at school early because they had to get to work and there were no school aides there to watch the kids,” he told me. “Every year they were cutting back. I turned to our attorney, Michael Rebell, and said ‘Something has to be done even if we have to file a lawsuit by ourselves.’”

They formed the Campaign for Fiscal Equity (CFE), and filed suit in 1993. Jackson’s first walk for education was on Oct. 12, 1999, the opening day of the trial. He and others marched 12 miles from his home in Manhattan’s Washington Heights to the Supreme Court building. But that trial didn’t end the case, and, Jackson said, “I told [Rebell] that when we go to the highest court we’re going to walk all the way to Albany.” From May 1 to May 8, 2003, they did just that; 13 years later, he didn’t expect he’d be doing it again.

Zakiyah Ansari is a public school parent and advocacy director at the Alliance for Quality Education. She recalled her own involvement with the fight for school funding. Ten years ago, she took her 10- and 11-year-old daughters on a bus tour to Albany to hear the court’s decision. “I would have never thought that a decade later, they’d be graduating college and never have reaped the benefits of CFE,” she said. “And so I’m here today because it’s time for us to fulfill this promise.”

After the Court of Appeals decision, then-Gov. Eliot Spitzer came to an agreement with the legislature on how to distribute the money; it was cut short by the 2008 financial crisis. “But now the state is totally in the black and the state legislature and the governor have refused to give the children what they’re due, another $3.9 billion in foundation aid,” said Jackson, who was a New York City Council member from 2001 until 2013. “What does that mean for New York City? About $2 billion. What does that mean for PS 187 in Washington Heights where my kids went to school? About $2 million.”

It’s not just the city, Jackson noted. “We walked through Yonkers, which under the foundation aid formula is owed $39 million. We walked through Peekskill and met in front of their high school, and they’re owed about $10.4 million.” 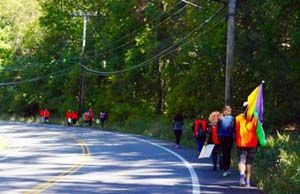 Marchers hugged the shoulder of the road as they headed toward Albany to make a case for funding New York public schools. (Photo by Sarah Jaffe)

But instead of funding the schools, in 2011 Gov. Andrew Cuomo and the legislature imposed a 2-percent property tax growth cap which hinders communities’ ability to raise their own school funds, Randi Weingarten noted. Weingarten, the president of the American Federation of Teachers and a native New Yorker, joined the march on Wednesday and told me, “It’s antidemocratic. This is something that conservatives, libertarians, progressives and liberals agree on. We need a voice for the people who are closest to our public schools, our communities: our parents and our teachers. They are the ones who every single day are responsible for nurturing the next generation.”

What’s more, Ansari said, the students who get hurt are the neediest students, and overwhelmingly black and Latino. “I have to wonder; this money is supposed to go to the highest-need districts and those children across this state are black and brown and poor children,” she said. “So why, as the governor of this state, wouldn’t you want to take care of your neediest population of young people?”

It’s hard to draw anyone’s attention from the Trump-Clinton circus. Yet Jackson, who himself ran for state Senate this year but was defeated in the Democratic primary, pointed out that the entire New York state legislature is also up for election. The walk, he noted, as well as a report that details how much each district is owed, was designed to pressure legislative candidates to stand up for public school funding.

“The investment in schools is a 24/7 issue,” Weingarten declared. On Thursday, she headed to Philadelphia as part of a day of action called by the Alliance to Reclaim Our Schools, a coalition of parent, student, community and labor groups. More than 200 cities and towns planned walk-ins at various schools on behalf of education funding, an end to charter schools and high-stakes testing, as well as reforms against the criminalization of black and Latino students.

From the Movement for Black Lives to the NAACP and community groups, Weingarten said, people are moving toward a renewed demand for community schools and turning away from privatization, testing and the closing of public schools. They are connecting the dots between racism in society and the divide between schools in black and Latino neighborhoods and those elsewhere.

Wednesday’s march broke for lunch at the library in Cold Spring, where the marchers made their own sandwiches, kicked off their shoes and tended to blisters. Their spirits were high, despite the fact that a spokesperson for Gov. Cuomo’s administration had called their march a “publicity stunt.”

“All of our feet are busted up,” Mindy Rosier joked. “There are easier ways to do a publicity stunt.” She shrugged off the statement. “I hope he sits down with us, but Cuomo is going to do what he does. We still have a week to go; who knows how big this is going to get?”

To Ansari, the march itself provided a great education. Her 15-year-old son, a public high school student, walked with her. At first, she said, when he’d asked to come along she had said no, that he would miss too much school. But when his school supported the idea, she changed her mind. “The first day, I think it was 16 miles. When we got to Yonkers he kissed me and said, ‘This is fun.’ We went around last night and asked everybody how they were feeling about this, he said, ‘I’m happy.’ Not just that he was out of school—he’s been doing this since he was 10.” Back then, he wrote to [former US Secretary of Education] Arne Duncan about his policies.

Sarah Jaffe is a reporting fellow at The Nation Institute and the co-host of Dissent magazine’s Belabored podcast. Her book, Necessary Trouble: America’s New Radicals, is due out from Nation Books in August 2016. Follow her on Twitter: @sarahljaffe.

This entry was posted in Education. Bookmark the permalink.