The corporate news media, allied with “media watchdog” groups, many financed with global billionaire troublemaker George Soros, have trotted out a new dog whistle to attack their opponents: “fake news stories.” The issue of “fake news stories” was even raised by outgoing President Barack Obama in a news conference in Berlin with German chancellor Angela Merkel. Both leaders cited “fake news stories” as something that threatens international stability.

Of course, there are an ample number of fake news stories that emanate from disreputable and discredited websites, many of them vanity sites intending to serve as “click bait” for the unsuspecting web surfer and even a few professional journalists taken in by alarmist headlines. A number of individuals have been duped by totally fake stories written by “Sorcha Faal,” a pseudonym for David Booth, allegedly a U.S. computer programmer and which may also be a pseudonym for another individual or group of individuals. Faal, Booth, or whatever his name is acts as a cyber version of an arsonist who releases fake stories attributed to Russian intelligence sources and then sits back to assess the impact of his prankster works. The fact that a number of Russian news organizations have re-published Faal/Booth fake articles as actual news leads some to believe that U.S. intelligence plays a role in the obvious disinformation operation. Faal/Booth has a number of competitors in the field of cyber-pranksterism.

However, the most prominent purveyors of fake news stories are the very corporate media entities that decry “fake news.” There are a number of examples of corporate media trafficking in fake news. The following are a few stark examples: 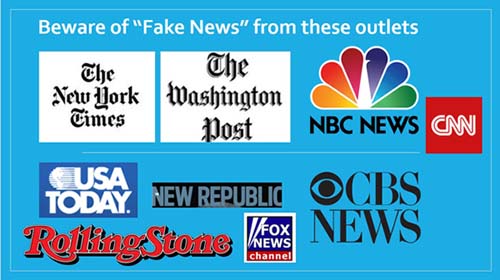 Blair made up from whole cloth stories about the DC sniper and Iraq war veterans. In all, 36 of the 73 national stories penned by Blair were fake. However, a number of media outlets, including the Times, reported as fact fake stories about Saddam Hussein’s “weapons of mass destruction,” all of which were false. New York Times reporter Judith Miller reported as fact information from Iraqi exiled leader Ahmed Chalabi alleging that Iraq possessed mobile weapons laboratories. The information was false, as was other U.S. “intelligence” on Iraq that was fed Miller and other reporters that was all bogus, including stories on Saddam Hussein allegedly trying to procure yellow cake uranium from Niger.

The corporate media is legitimized by a very phony “arbiter” of what and what does not constitute accurate news: the very problematic Snopes.com. Snopes traffics in as much fakery in its “debunking” of alternative media articles as does the corporate media in its national and international reporting.

It is clear that Obama, Merkel, the Soros operation, and others are attacking “fake news stories” in order to hide the real target for their invective rhetoric: the alternative media, which does not kow-tow to corporate executives, advertisers, and special interests ranging from Big Pharma to the Israeli Lobby. The alternative media provides the lifeblood for the First Amendment guarantee of freedom of the press. The corporate media is a bloated and deceitful artifice whose time is coming to an end.

This entry was posted in Media. Bookmark the permalink.