President Trump’s powerful political adviser Stephen Bannon served as an aide to two chiefs of Naval Operations, Admirals Thomas Hayward and James Watkins, during one of the largest pedophile crimes that ever took place within naval ranks in the then-207 years of the history of the U.S. Navy.

While serving as a Lieutenant (junior grade) aboard the Spruance class destroyer USS Paul F. Foster in the Pacific fleet, Bannon was selected to serve on the staff of the Chief of Naval Operations, a highly-coveted billet seen as a stepping stone for rapid promotion up the ranks. A February 1, 2017, article in Navy Times referred to Bannon’s unusual assignment while still a lieutenant JG: “Even in the much larger Navy of the 1980s, billets on the CNO’s staff were not easy to come by.” So why was Bannon selected for such a position? His Navy awards were what anyone at his rank would have received after sea duty: a Sea Service Deployment Ribbon, a Navy “E” Ribbon, and a Navy Expeditionary Medal.

Bannon reported to the CNO’s staff January 12, 1981, almost a week prior to Ronald Reagan’s inauguration. The previous November, Bannon attended the victory party for Reagan at the Century Plaza hotel. Apparently, Bannon developed an intense dislike to President Jimmy Carter during his time aboard the Foster in the Persian Gulf, a time frame that included the botched 1980 operation to rescue U.S. hostages at the seized U.S. embassy in Tehran. Bannon’s time aboard the Foster also included the Reagan campaign’s act of treason in negotiating an “arms-for-no-hostages” agreement with Tehran that ensured the hostages would not be released until after Reagan’s election. The hostages were released simultaneous to Reagan’s swearing in on January 20, 1981.

After working for Admirals Hayward and Watkins, Bannon left the Navy with the rank of lieutenant on October 30, 1983. He obtained a master’s degree in international relations at Georgetown University while working for the CNO. Normally, a master’s degree would have been a ticket for Bannon to be promoted to Lieutenant Commander, yet he left the Navy after only seven years. Bannon went to Harvard where he earned an masters of business administration (MBA). After acquiring his MBA, Bannon clinched a job with Goldman Sachs.

The Naval Investigative Service (NIS) was called in and the operations officer at the Oregon naval installation was requested by the FBI and NIS to participate as the lead temporary FBI special agent in a carefully-prepared sting of the base commander to obtain evidence and the identities of co-conspirators.

The commander of the Coos Head Naval Facility was relieved of duty and jailed on charges he promoted an obscene sexual performance by a child.

Frawley had been at the station since 1980.

Officials declined to say how many children were involved in the case or whether additional arrests were expected.”

During the FBI/NIS sting operation, Frawley admitted that his network of pedophiles included senior naval officers, clerics, lawyers, politicians, and judges. Later, the two NIS agents revealed that the Coos Bay scandal “went to the very top” of the Reagan administration. A number of forced retirements of senior naval personnel, including one rear admiral, were announced after Frawley’s arrest. There was also a significant foreign intelligence aspect to the case that involved the Soviet Union. 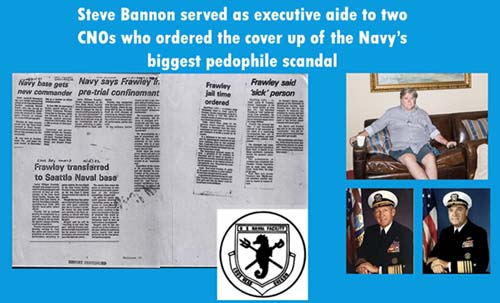 Hayward was the CNO at the time the Chicago kingpin identified the Coos Head base commander as part of his ring, with Bannon serving as his aide. Watkins succeeded Hayward on June 30, 1982. It was during Watkins’s watch and with Bannon remaining as his aide that the Navy pedophile scandal broke open with a number of arrests and forced retirements following. Attempts to have further details about the Navy ring publicized by Navy Times and the Eugene (OR) Register-Guard were met with threats against the newspapers editors and publishers by top Navy and Defense Department officials, including members of the CNO’s staff. Reporters for the local NBC affiliate, KCBY-TV, were told to stay away from Navy property while reporting on the pedophile story. Armed guards were posted at the entrance to the Navy housing area to deter inquisitive reporters. A Bethesda Naval Hospital team of psychiatrists, child counselors, and other medical personnel who were on stand-by to be flown to Oregon to deal with children traumatized by the Navy pedophile ring were ordered to “stand down.” All records bearing the NIS criminal investigation case number, 08–18–82N12PD 718XNA, were purged from Navy computer systems on the orders of the CNO and secretary of the Navy.

Some important questions remain about Bannon’s unusual post-sea duty time in the Navy: was Bannon rewarded with a Georgetown M.A., Harvard Business School MBA, and Goldman Sachs for “services rendered” in helping to suppress from media attention the worst pedophile scandal in the history of the U.S. Navy? Did Bannon use his influence with Breitbart and other alt.right media operations to push the frivolous “Pizzagate” story, which attempted to tarnish Hillary Clinton’s senior campaign staff and donors in order to keep the public’s attention away from an actual major pedophile scandal?