The right-wing Christian-owned store chain Hobby Lobby has settled a federal case that saw the Oklahoma City-based crafts retailer fined $3 million for illegally importing stolen artifacts from Iraq for “the Museum of the Bible” the store’s owner, Steve Green, is building near the National Mall in Washington, DC. Oddly, the title of the civil asset forfeiture case, brought in the U.S. Court for the Eastern District of New York, does not mention the 600-store Hobby Lobby chain or Green as the major culprits. Had the case been criminal, as it should have been since Hobby Lobby violated a 1990 law on trafficking of Iraq, the case would have been United States of America v. Hobby Lobby, Inc.

Democrats in Congress suspect that the Justice Department, under pressure from Green’s fellow right-wing Christian fundamentalist, Attorney General Jeff Sessions, gave Green a pass in allowing him to avoid criminal charges in return for accepting a fine and civilly forfeiting the stolen artifacts. Somehow, Green and Hobby Lobby managed to evade criminal prosecutions. The formal civil forfeiture case title is “United States of America, plaintiff, against Approximately Four Hundred Fifty (450) Ancient Cuneiform Tablets and Approximately Three Thousand (3,000) Ancient Clay Bullae.” None of the Israeli or UAE agents are identified in the federal court filing. They are given the designations as “Israeli Dealer #1,” “Israeli Dealer #2,” “Israeli Dealer #3,” and “UAE Dealer.” 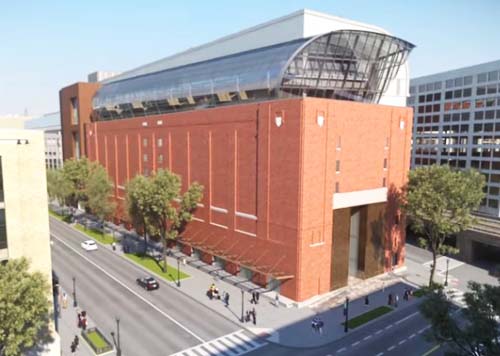 How many of the artifacts displayed in Hobby Lobby's $800 million Bible (or ‘Buy Bull’) Museum, three blocks south of the U.S. Capitol, were stolen from Iraq in the neo-con occupation of that country? The museum is scheduled to open in November.

Green first inspected the artifacts in 2010 when he visited the United Arab Emirates. The artifacts were in the custody of two Israeli dealers who claimed they were the property of a third Israeli dealer. Another dealer from the UAE was present at Green’s meeting with the Israelis. Hobby Lobby agreed to wire $1.6 million to seven bank accounts identified with five different individuals in return for the artifacts. Green used three different corporate entities to receive the shipments: Hobby Lobby, Mardel, Inc. and Crafts, Etc! One shipment of antiquities was falsely undervalued, with the invoice stating the contents were “57 ‘hand made [sic] miniature clay tiles (sample)’ valued at $5.00 each for a total value of $285.00.”

In any other similar case, Hobby Lobby would have been charged with criminal “construction of payments” to avoid detection of paying for stolen goods, that is, “money laundering.” In January 2011, U.S. Customs and Border Protection seized five shipments containing Green’s stolen artifacts at the FedEx facility in Memphis, Tennessee. Additional shipments, via express mail from Israel and the UAE, were seized by U.S. Customs at John F. Kennedy International Airport in New York. Some of the shipments’ points of origin were falsely identified as Turkey and Israel. Justice Department investigators discovered that Green’s Israeli agents used fake invoices, shipping labels, and other documentation to mask the actual origin and nature of the stolen artifacts and antiquities.

An antiquities expert hired by Hobby Lobby before the purchase of the stolen goods was arranged warned the corporation that the items they planned to purchase may have been stolen. The following statement from the expert is excerpted from the federal case filing:

“I would regard the acquisition of any artifact likely from Iraq (which could be described as Mesopotamian, Assyrian, Akkadian, Sumerian, Babylonian, Parthian, Sassanian and

possibly other historic or cultural terms) as carrying considerable risk. An estimated 200–500,000 objects have been looted from archaeological sites in Iraq since the early 1990s; particularly popular on the market and likely to have been looted are cylinder seals, cuneiform tablets. . . . Any object brought into the US and with Iraq declared as country of origin has a high chance of being detained by US Customs. If such an object has been brought into the US in the past few years and was not stopped by US Customs, then you need to examine the import documents to see if the country of origin was properly declared; an improper declaration of country of origin can also lead to seizure and forfeiture of the object.”

Disregarding the expert’s warning, Hobby Lobby negotiated the final sale and shipment of the items.

The Green family, which prides itself on Christian evangelism and conservative values, including opposition to gay marriage and abortion, conveniently ignored the sixth of the Ten Commandments: “Thou shalt not steal.”

This editor first reported on the surgical theft of artifacts from Iraq on April 14, 2003: “U.S. troops stood by while Iraqi mobs looted and destroyed artifacts at the National Museum of Iraq in Baghdad. They also reportedly joined looters who pillaged other lucrative targets like office buildings, stores, and private homes. The Bush regime ignored calls from Koichiro Matsura, the head of the United Nations Educational, Scientific, and Cultural Organization (UNESCO), who appealed to the United States to provide protection for Iraqi museums . . . One could feel the pain experienced by the museum’s deputy director when she tearfully told Western journalists that 170,000 priceless artifacts dating back thousands of years to the very cradle of human civilization in the Tigris-Euphrates Valley, the fabled home of the biblical Garden of Eden, were looted or destroyed. She said one tank and one or two American soldiers would have been sufficient to protect the museum from the vandals. But instead, American troops stood idly by while 7,000 years of Iraqi history was cleansed. Even irreplaceable archaeological files and computer disks were destroyed. Museum employees blamed U.S. troops for the carnage.”

On August 17, 2007, WMR reported: ” . . . the looting of Iraqi treasures has been surgical and accomplished by outsiders who know in advance what they wish to obtain. Arab interlocutors based in Beirut, Geneva, London, Saudi Arabia, and Dubai are laundering money made from the looting of Iraqi artifacts. Much of the money is being used to fund various right-wing and neocon causes in the United States, Europe, and other regions.” That report was followed a few days later, on August 21, by the following: “[Israeli] Chief Superintendent Asher Ben-Artzi, the chief of Israel’s INTERPOL branch . . . is under investigation for receiving stolen ‘relics.’” Our report added, “Israel has been one of the destinations for a number of stolen artifacts and relics from Iraq, especially relics that have historical significance dating from the ‘Babylonian Captivity’ of the Biblical-era Jewish people.”

On February 27, 2015, WMR reported: “Although ISIL [Islamic State] videos show jihadists destroying an Assyrian winged lion and a relief of a face, priceless archaeological finds from the Assyrian palace of King Sennacherib are believed to have been sold to black marketers, just as other artifacts looted from museums and ruins in Egypt, Babylon, Libya, Syria, Pakistan, and Yemen have been sold to unscrupulous dealers of stolen antiquities, many of whom are based in Israel.”

Four years earlier, on February 14, 2011, WMR reported: “Artifacts from the Museum of Islamic Art in Cairo, including those from the Umayyad, Abbasid, Tulunid, Fatimid, Ayubid, Mameluk and Ottoman eras . . . ended up in the hands of black marketers, with many ending up in private hands in Israel or among Jewish fences in Europe.”

U.S. Customs managed to identify one Israeli conduit for Hobby Lobby’s artifact collection at its Bible Museum in Washington. Congress should demand that all the museum’s additional holdings of 40,000 be audited by independent experts because there is a distinct probability that the thieving “Christian” fundies at Hobby Lobby managed to purloin other stolen artifacts from ancient sites in carnage-ravaged Syria, Egypt, Yemen, Palestine, Libya, and Iraq with the help of their Israeli friends.