The Palm Beach, Florida, resort of Mar-a-Lago was not always in the possession of the current grifter and con-artist who owns the opulent estate. Mar-a-Lago was built in the 1920s by General Foods heiress Marjorie Meriweather Post. A resident of Washington, DC, Post willed Mar-a-Lago in 1973 to the United States government. The estate was to be used as a winter White House by U.S. presidents and visiting foreign dignitaries.

President Richard Nixon, however, preferred hanging out with his mafiosi friends Charles “Bebe” Rebozo and Robert Abplanalp, the latter the inventor of the aerosol spray valve, at his Key Biscayne White House. President Jimmy Carter decided Mar-a-Lago was not worth the maintenance and upkeep costs. Consequently, in 1981, the U.S. government returned Mar-a-Lago to the Post Foundation in 1981 after the site was declared a National Historical Landmark in 1980. Donald Trump bought the estate in 1985 for $7 million after he depreciated the value of Mar-a-Lago by some $20 million after buying the easement from Mar-a-Lago and the Atlantic Ocean from the owner of Kentucky Fried Chicken for $2 million.

Rather than serve the people of the United States as a bequeathed free residence for presidents and foreign leaders, Mar-a-Lago now serves as a monument to the Emoluments Clause violations repeatedly conducted by Trump, whose company charges foreign visitors, well-heeled lobbyists, and even the Secret Service for staying at the property. U.S. embassy websites abroad have advertised Mar-a-Lago in violation of U.S. law. 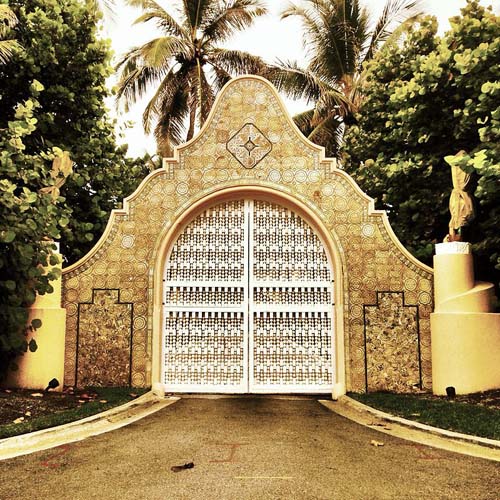 Gate to Mar-a-Lago. The estate was willed to the people of the United States by Marjorie Meriweather Post. It's now in the hands of grifter and con-artist Donald Trump.

Marjorie Meriweather Post, although wealthy, was the absolute opposite of the vainglorious and selfish Trump. In May 1932, when World War I veterans marched on Washington to demand early payment of bonuses to offset their loss of jobs resulting from the Great Depression, General Douglas MacArthur met them with brutal and even deadly force. However, Mrs. Post visited the Willard Hotel in downtown Washington and prevailed upon the owner, Belle Layton Willard, the widow of Joseph Edward Willard, whose father founded the famed hotel, to send 5,000 sandwiches and an ample supply of iced tea and lemonade to the Bonus Marchers encamped in Anacostia Flats in southwest DC.

It is ironic that Mar-a-Lago, willed to the people of the United States by Mrs. Post, is now in the private hands of an egotistical robber baron like Donald Trump. Mrs. Post, who contributed to veterans, funded a U.S. Army hospital in France during World War I, and supported the Scout movement and the Smithsonian Institution, is the direct opposite of Trump, who scams veterans with phony promises of contributions and adequate health care, misused an appearance at the 2017 Boy Scott jamboree to advance his personal political agenda, and cut federal funding for the Smithsonian.