Universal Basic Income is easier than it looks

Calls for a Universal Basic Income have been increasing, most recently as part of the Green New Deal introduced by Rep. Alexandria Ocasio-Cortez (D-NY) and supported in the last month by at least 40 members of Congress. A Universal Basic Income (UBI) is a monthly payment to all adults with no strings attached, similar to Social Security. Critics say the Green New Deal asks too much of the rich and upper-middle-class taxpayers who will have to pay for it, but taxing the rich is not what the resolution proposes. It says funding would primarily come from the federal government, “using a combination of the Federal Reserve, a new public bank or system of regional and specialized public banks,” and other vehicles.

The Federal Reserve alone could do the job. It could buy “Green” federal bonds with money created on its balance sheet, just as the Fed funded the purchase of $3.7 trillion in bonds in its “quantitative easing” program to save the banks. The Treasury could also do it. The Treasury has the constitutional power to issue coins in any denomination, even trillion dollar coins. What prevents legislators from pursuing those options is the fear of hyperinflation from excess “demand” (spendable income) driving prices up. But in fact the consumer economy is chronically short of spendable income, due to the way money enters the consumer economy. We actually need regular injections of money to avoid a “balance sheet recession” and allow for growth, and a UBI is one way to do it.

The pros and cons of a UBI are hotly debated and have been discussed elsewhere. The point here is to show that it could actually be funded year after year without driving up taxes or prices. New money is continually being added to the money supply, but it is added as debt created privately by banks. (How banks rather than the government create most of the money supply today is explained on the Bank of England website here.) A UBI would replace money-created-as-debt with debt-free money—a “debt jubilee” for consumers—while leaving the money supply for the most part unchanged; and to the extent that new money was added, it could help create the demand needed to fill the gap between actual and potential productivity.

The “bank money” composing most of the money in circulation is created only when someone borrows, and today businesses and consumers are burdened with debts that are higher than ever before. In 2018, credit card debt alone exceeded $1 trillion, student debt exceeded $1.5 trillion, auto loan debt exceeded $1.1 trillion, and non-financial corporate debt hit $5.7 trillion. When businesses and individuals pay down old loans rather than taking out new loans, the money supply shrinks, causing a “balance sheet recession.” In that situation, the central bank, rather than removing money from the economy (as the Fed is doing now), needs to add money to fill the gap between debt and the spendable income available to repay it.

Debt always grows faster than the money available to repay it. One problem is the interest, which is not created along with the principal, so more money is always owed back than was created in the original loan. Beyond that, some of the money created as debt is held off the consumer market by “savers” and investors who place it elsewhere, making it unavailable to companies selling their wares and the wage-earners they employ. The result is a debt bubble that continues to grow until it is not sustainable and the system collapses, in the familiar death spiral euphemistically called the “business cycle.” As economist Michael Hudson shows in his 2018 book And Forgive Them Their Debts, this inevitable debt overhang was corrected historically with periodic “debt jubilees”—debt forgiveness—something he argues we need to do again today.

For governments, a debt jubilee could be effected by allowing the central bank to buy government securities and hold them on its books. For individuals, one way to do it fairly across the board would be with a UBI.

Why a UBI need not be inflationary

In a 2018 book called The Road to Debt Bondage: How Banks Create Unpayable Debt, political economist Derryl Hermanutz proposes a central-bank-issued UBI of one thousand dollars per month, credited directly to people’s bank accounts. Assuming this payment went to all US residents over 18, or about 241 million people, the outlay would be close to $3 trillion annually. For people with overdue debt, Hermanutz proposes that it automatically go to pay down those debts. Since money is created as loans and extinguished when they are repaid, that portion of a UBI disbursement would be extinguished along with the debt.

People who were current on their debts could choose whether or not to pay them down, but many would also no doubt go for that option. Hermanutz estimates that roughly half of a UBI payout could be extinguished in this way through mandatory and voluntary loan repayments. That money would not increase the money supply or demand. It would just allow debtors to spend on necessities with debt-free money rather than hocking their futures with unrepayable debt.

He estimates that another third of a UBI disbursement would go to “savers” who did not need the money for expenditures. This money, too, would not be likely to drive up consumer prices, since it would go into investment and savings vehicles rather than circulating in the consumer economy. That leaves only about one-sixth of payouts, or $500 billion, that would actually be competing for goods and services; and that sum could easily be absorbed by the “output gap” between actual and forecasted productivity.

According to a July 2017 paper from the Roosevelt Institute called “What Recovery? The Case for Continued Expansionary Policy at the Fed”:

GDP remains well below both the long-run trend and the level predicted by forecasters a decade ago. In 2016, real per capita GDP was 10% below the Congressional Budget Office’s (CBO) 2006 forecast, and shows no signs of returning to the predicted level.

The report showed that the most likely explanation for this lackluster growth was inadequate demand. Wages have remained stagnant; and before producers will produce, they need customers knocking on their doors.

In 2017, the US Gross Domestic Product was $19.4 trillion. If the economy is running at 10% below full capacity, $2 trillion could be injected into the economy every year without creating price inflation. It would just generate the demand needed to stimulate an additional $2 trillion in GDP. In fact a UBI might pay for itself, just as the G.I. Bill produced a sevenfold return from increased productivity after World War II.

The evidence of China

That new money can be injected year after year without triggering price inflation is evident from a look at China. In the last 20 years, its M2 money supply has grown from just over 10 trillion yuan to 80 trillion yuan ($11.6T), a nearly 800% increase. Yet the inflation rate of its Consumer Price Index (CPI) remains a modest 2.2%. 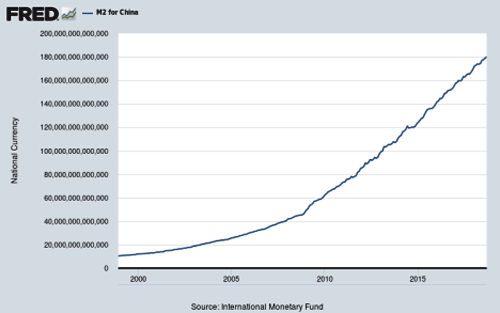 Why has all that excess money not driven prices up? The answer is that China’s Gross Domestic Product has grown at the same fast clip as its money supply. When supply (GDP) and demand (money) increase together, prices remain stable. 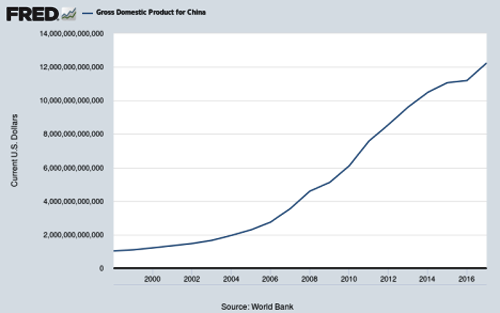 Whether or not the Chinese government would approve of a UBI, it does recognize that to stimulate productivity, the money must get out there first; and since the government owns 80% of China’s banks, it is in a position to borrow money into existence as needed. For “self-funding” loans—those that generate income (fees for rail travel and electricity, rents for real estate)—repayment extinguishes the debt along with the money it created, leaving the net money supply unchanged. When loans are not repaid, the money they created is not extinguished; but if it goes to consumers and businesses that then buy goods and services with it, demand will still stimulate the production of supply, so that supply and demand rise together and prices remain stable.

Without demand, producers will not produce and workers will not get hired, leaving them without the funds to generate supply, in a vicious cycle that leads to recession and depression. And that cycle is what our own central bank is triggering now.

The Fed tightens the screws

Rather than stimulating the economy with new demand, the Fed has been engaging in “quantitative tightening.” On December 19, 2018, it raised the fed funds rate for the ninth time in 3 years, despite a “brutal” stock market in which the Dow Jones Industrial Average had already lost 3,000 points in 2-½ months. The Fed is still struggling to reach even its modest 2% inflation target, and GDP growth is trending down, with estimates at only 2-2.7% for 2019. So why did it again raise rates, over the protests of commentators including the president himself?

For its barometer, the Fed looks at whether the economy has hit “full employment,” which it considers to be 4.7% unemployment, taking into account the “natural rate of unemployment” of people between jobs or voluntarily out of work. At full employment, workers are expected to demand more wages, causing prices to rise. But unemployment is now officially at 3.7%—beyond technical full employment—and neither wages nor consumer prices have shot up. There is obviously something wrong with the theory, as is evident from a look at Japan, where prices have long refused to rise despite a serious lack of workers.

The official unemployment figures are actually misleading. Including short-term discouraged workers, the rate of US unemployed or underemployed workers as of May 2018 was 7.6%, double the widely reported rate. When long-term discouraged workers are included, the real unemployment figure was 21.5%. Beyond that large untapped pool of workers, there is the seemingly endless supply of cheap labor from abroad and the expanding labor potential of robots, computers and machines. In fact the economy’s ability to generate supply in response to demand is far from reaching full capacity today.

Our central bank is driving us into another recession based on bad economic theory. Adding money to the economy for productive, non-speculative purposes will not drive up prices so long as materials and workers (human or mechanical) are available to create the supply necessary to meet demand; and they are available now. There will always be price increases in particular markets when there are shortages, bottlenecks, monopolies or patents limiting competition, but these increases are not due to an economy awash with money. Housing, healthcare, education and gas have all gone up, but it is not because people have too much money to spend. In fact it is those necessary expenses that are driving people into unrepayable debt, and it is this massive debt overhang that is preventing economic growth.

Without some form of debt jubilee, the debt bubble will continue to grow until it can again no longer be sustained. A UBI can help correct that problem without fear of “overheating” the economy, so long as the new money is limited to filling the gap between real and potential productivity and goes into generating jobs, building infrastructure and providing for the needs of the people, rather than being diverted into the speculative, parasitic economy that feeds off them.

This article was first published on Truthdig.com. Ellen Brown is an attorney, founder of the Public Banking Institute, and author of twelve books including Web of Debt and The Public Bank Solution. A 13th book titled Banking on the People: Democratizing Finance in the Digital Age is due out early next year. She also co-hosts a radio program on PRN.FM called “It’s Our Money.” Her 300+ blog articles are posted at EllenBrown.com.

This entry was posted in Money. Bookmark the permalink.

One Response to Universal Basic Income is easier than it looks