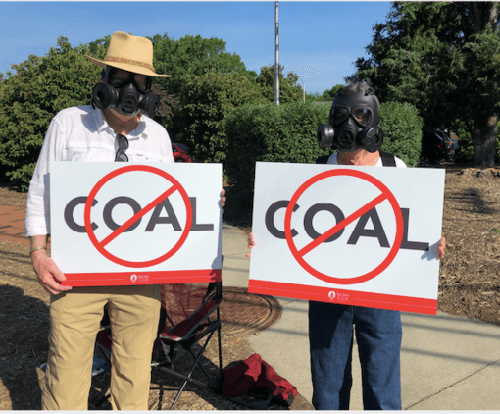 Earlier in May, two North Carolina Republicans intro’d state legislation that would place obstacles in the path of renewable energy development. Senate Bill 843, sponsored by Senators William Cook and Andrew Brock, leaves anyone with even semi-decent cognitive functioning asking WTF(?). Despite the unquestionable obviousness of the why of that What, you still can shake your head no, no, no in amazement, outrage, disbelief.

Senate Bill 843 mandates the location—a distance at least 1½ miles from a neighboring property line—of solar and wind facilities. Additionally, the bill requires that solar panels and wind turbines are concealed by landscaping, trees, shrubs, flowers. Because green energy is ugly, so ugly it must be hidden from view.

In contrast to the beauty (gasp) of a coal plant, like the University of North Caroline at Chapel Hill Coal Plant. This plant is near campus, adjacent to a residential neighborhood, a block from more residences and businesses, and a little over one mile from a public school. Someone told me the UNC Coal Plant meets industry safety standards. It doesn’t.

Over the years, students have protested the UNC Coal Plant. Their efforts yielded results, albeit temporary. The university HAD committed to be coal independent in 2020, converting to renewables, however UNC rescinded the agreement. Its current coal permit expires in 2021 but the university is working on a new permit, one allowing the plant to emit four to six times the limits of sulfur dioxide and nitrogen oxide found to be safe by the Clean Air Act. More Chapel Hill neighborhoods (and schools) will be at risk.

Back to the why of What: Sen. Cook, one of the two sponsors of Senate Bill 843, is a retired manager at the Potomac Electric Power Company in Washington, D.C. where he was employed for 34 years. (He’s a fan of fracking.) Let’s hear it for Big Greed with a quote from Cook: “Numerous constituents have contacted me throughout Northeastern North Carolina with their concerns pertinent (to) the potential negative impacts. It is obvious, that many people (due to view, sound, flicker, etc.) would choose NOT to buy a home where there are industrial wind turbines close by.”

So, are we to assume these constituents would rather suffer respiratory conditions, heart disease, neurotoxicity, early death than endure view, sound, and the flicker of windmills?

On Friday mornings, my friend and neighbor, Gary Richards, and I stand on a corner across from the UNC Coal Plant. We each hold a no coal sign. Last week, we wore gas masks to make a more profound statement. Motorists slow, give us a thumbs up, honk their approval. Cyclists wave, thank us.

Gary has been a peace and justice activist for years. His present concentration is huge and urgent—learning and teaching how to nurture our planet, to treat nature with the grace it requires, for you, for all, but also because his grandchildren attend the public school near the UNC Coal Plant.

This entry was posted in Commentary, Energy. Bookmark the permalink.