Individuals with a cervix

In an effort to be more inclusive and accurate, CNN purposely avoided using the traditional term for ‘individuals with a cervix’- women.  The expected brouhaha exploded over the Twitterverse and anyone with the slightest familiarity with a user’s profile could predict with quantum accuracy their point of view.

Such is the world we live in.

There weren’t any original arguments, though one side did have a clear advantage in terms of humor, which should give the other pause. (men=individuals with erections)

But there is a profound dilemma underlying this seemingly pedestrian skirmish from the culture war; the accuracy of perception itself and how it’s transformed into language. The current cultural revolution spreading through the United States is founded on an ideology that weaponizes language.  It sees structural inequality embedded in the words we use and the key to their revolution is the transformation of language itself and the ‘reality’ it describes.

By deconstructing traditional narratives they inevitably find easily toppled fallacies and assumptions.  Little by little, most of the myths holding together the country are crumbling.  As Wittgenstein put it, “At the core of all well-founded belief lies belief that is unfounded.”

To understand what is going on, we must step back and review what we think we know, and how we know it.

The mind interprets sensory inputs and classifies them in a way that best favors evolutionary fitness, NOT their accuracy in regard to the “objective consensus reality”.

It’s not important how ‘true’ any perception or linguistic interpretation is, what’s crucial is its ability to facilitate decisions that give us an evolutionary advantage. 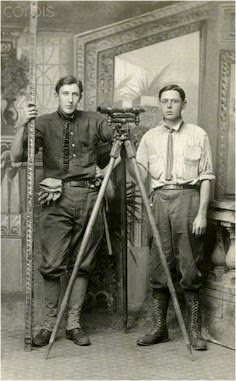 As a young individual with erections, I worked on a surveying crew as a rodman (an individual holding a stick with an erection who is often accused of holding the erection more than the stick). Basically, I was the grunt of the crew.  The crew chief would shout out whenever we were moving too slowly for his liking, “Boys, we ain’t building a baby grand, let’s get a move on!”  This was his mantra, and a very wise one indeed.

Different surveying tasks require different levels of accuracy.  You don’t need the same level of precision for the centerline of a highway as you do for the four corners of a house.  Too much and you are wasting valuable time, too little and the work is useless.  The key is to use just the right amount and you optimize work efficiency while at the same time giving the builders the sufficient precision to correctly place the structure.

I could spend thirty minutes perfectly peeling a potato (as my daughter does), or I could quickly butcher three spuds, fry and eat them in thirty minutes.  Most opt for the latter.

The assumptions underlying a culture work in much the same way.  They don’t need to be empirically accurate, they just have to work.  Culture is like a good film, it needs to trick us into suspending disbelief enough to allow us to be engrossed in the story.  The woke crowd is now stopping the film every ten minutes, turning on the lights and explaining that what we just saw is not empirically accurate.  Pretty soon there won’t be anyone left in the theatre.

“Individuals with a cervix” is certainly more accurate than “women”.  The Canadian Cancer Society explains:

If you’re a trans woman, you may not have given much thought to Pap tests and cervical cancer. And if you haven’t, that makes a fair amount of sense. After all, in order to get cervical cancer, you need to have a cervix — that is, the organ that connects the vagina to the uterus.

If you’re a trans woman and have not had bottom surgery, you aren’t at risk for cervical cancer.

If, however, you’re a trans woman who has had bottom surgery to create a vagina (vaginoplasty) and possibly a cervix, there’s a very small risk that you can develop cancer in the tissues of your neo-vagina or neo-cervix.

Who could argue with this?  Even if it saves one person from getting cancer isn’t it worth sending the Trumpverse into a tizzy?

The deplorables would argue that the problem isn’t necessarily with this one specific case of linguistic Jiu-Jitsu from the Clinton News Network, but where it’s leading us- the dreaded slippery slope.  The most basic assumptions about gender and culture are being called into question, maybe for good reason, leaving many people with the feeling that we are slipping into a nihilistic void.  Is anything we assumed to be true regarding who we are and what we believe going to survive? 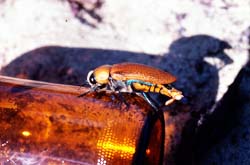 How important is the correlation between the veracity of our narratives and the overall health of our society?  The cognitive psychologist Donald Hoffman illustrates this very well using the example of a giant jewel beetle which prefers copulating with beer bottles to actual females of his own species as the beer bottle’s form and dimensions trick him into thinking it’s a better mate than the real thing.  His perception deceives him. Sometimes our narratives, while false, work well (American exceptionalism), and sometimes they don’t (the Branch Davidians).

What we see is simply an image reproduced in our brains from the light that enters our eyes.  How close this reproduction is to the actual perceived object is debatable, but in the end it doesn’t really matter.  What matters is that we get the food we need, we mate and we don’t get killed by predators/rivals.

The current ‘woke’ philosophy, embraced by almost all of institutional America, is based on Critical Theory.  Critical Theory argues that there are no absolute, universal truths. It explains culture (including science to a great degree) simply in terms of relative power dynamics.

Andrew Sullivan on the ‘woke’ philosophy behind ‘people with a cervix’:

Just as this theory denies the individual, it also denies the universal. There are no universal truths, no objective reality, just narratives that are expressed in discourses and language that reflect one group’s power over another. There is no distinction between objective truth and subjective experience, because the former is an illusion created by the latter. So instead of an argument, you merely have an identity showdown, in which the more oppressed always wins, because that subverts the hierarchy.

There are no ‘true’ narratives anymore, there is only politics.

The deplorables are terrified that the social justice warriors have completely hijacked the narrative machine.  Anyone who has turned on a TV, attended a university, read a magazine or gone to a movie in the last ten years realizes ‘wokism’ won this battle long ago.

The new narrative is that there is no narrative- we can make it up as we go.  Even physics gives us parallel universes and particles going through two holes at the same time.  Try that one Mr. Deplorable!

A hard reality based on a ‘true’ narrative- that train left the station a long time ago.

John Bell succeeded in proving that no quantum theory based on the joint assumptions of reality and locality could successfully reproduce the predictions that are yielded by orthodox, i.e., operationalist quantum mechanics.

Try and catch a train using that theory.

You might ask, what does quantum mechanics have to do with cervixes?  The answer is everything.  If physics isn’t even sure the world exists in one time and one place, then everything is up for grabs.

There are two key elements underlying this very strange time in Western history.  The first is that our shared narratives have been swept away;  there’s no longer a unifying myth for our culture.  The second crucial dynamic is that a small, radical group is rewriting our history and creating a new myth right before our eyes and the institutional pillars of our society are all on board.

Many ‘regular folk’ have been left stunned.  It’s like the spouse in a traditional marriage coming home one day and saying, “Hey honey, we’re now in an open marriage. Time to get with the program.”

But in a culture where anything goes, is the current ‘woke’ narrative the best we can do?  It seems like the entire purpose of their endeavor is to pit everyone against each other by dividing us up into ‘power’ groups based on race, gender, and sexual orientation. Each group is pitted against the other in a master class on divide and conquer.

We live in a world of immense abundance AND with record levels of inequality.  Never in the history of man has there ever been these levels of wealth accumulation by the fortunate few.  So how is it that in the middle of a pandemic and an economic catastrophe, the protests are about race and NOT about wealth distribution?

Doesn’t this seem a bit odd?

Imagine if the restless masses were smashing into the retail outlets of global conglomerates and running out with bling in the name of a new, more equitable monetary system for EVERYONE?

Instead, we pour guilt, shame and hatred over each other while the script writers sip fancy booze and giggle. The SP 500 is about even for a year in which the entire world economy has collapsed. 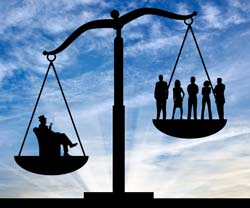 What if we all played along and decided to believe in logic again for a few months?  Would it lead us to the insight that there’s never been a better time for a mass revolution to topple a world monetary system that prints money for the uber wealthy and demands the rest of us work to pay it back?

Maybe a good time for a debt jubilee?  Imagine protesters demanding a write off of all student debt?  You think Nancy Pelosi would kneel for that?

Does anyone really believe the current script just emerged from nowhere to take over the entire national conversation?

What’s terrifying is there’s no putting the race/ethnic hatred back in the bottle.  It’s primal, tribal stuff that digs at the core of our beings.  What they’re injecting into our culture is much more dangerous the coronavirus.  Today our dear woke friends in Silicon Valley have the means to turn us on and off with the flick of a mouse and unless we turn off the phones and go for the pitchforks, we’re doomed.

As E. O. Wilson once said, “The real problem of humanity is the following: we have paleolithic emotions; medieval institutions; and god-like technology.”  The ones with their hands on the god-like technology have no intention of letting us get at their billions, so they have us fighting with each other over what it means to have a cervix.

Robert Bonomo is a film maker, blogger, novelist and esotericist. He has lived and worked in Madrid, San Francisco, Buenos Aires, Kamchatka, Miami, Valencia, Cartagena, New York, Luoyang, China and a few other not so interesting places. He has been published in some of the leading alternative media sites including Counterpunch, LewRockwell.com, Global Research.com, Activist Post, Business Insider, Pravda, RINF, Astrological News Service, The Mountain Astrologer.