The exploitation of Turkish nationalism in the Armenian-‘Azerbaijani’ war 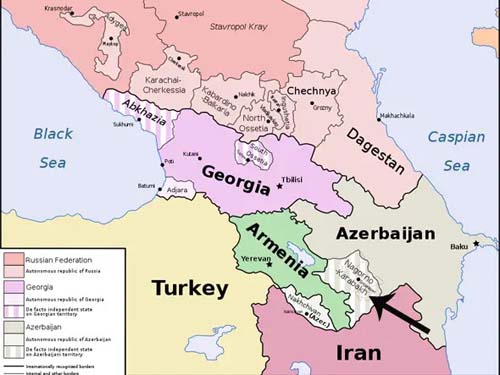 As the signal-to-noise ratio decreases in the reporting of events surrounding the September 27 Azerbaijani assault on the Armenian-inhabited region of Nagorno-Karabakh, a much more surreptitious current has received virtually no reporting: Iran. Influential think tanks generate their well-crafted equivocation and prevarication, never really following the evidence and keeping readers cleverly occupied and furious at claims such as “there have been some reports of jihadists being recruited by and transported to the region by Turkey,” when it is not only clear they have been recruited, with videos of scores being slaughtered by Armenian forces and transcripts of radio transmissions in Arabic suspiciously ignored.

After last July’s border flareup, with its display of gross Azerbaijani military incompetence, Turkey proclaimed active support for Azerbaijan. Within days of the flareup subsiding, Turkey began war games in Azerbaijan on Armenia’s borders. Turkey never brought home its advisors, trainers, or equipment. Turkey actively recruited and transported Libyan and Syrian jihadists over Georgian airspace into Azerbaijan to act as cannon fodder in place of Azerbaijan soldiers. One need only peruse flightradar24′s archives to verify this activity. Turkey’s F-16s and AWACS have participated in fighting Armenians. On September 30, the Turkish military assumed control of Azerbaijan’s Air Force. On October 10, an elite force of some two hundred elite Turkish soldiers attacked an Armenian town, many hours after the recent humanitarian cease-fire was to have commenced. Turkish soldiers are embedded within the Azerbaijani army and its command and control.

Rather than deter Erdogan’s neo-Ottoman designs, some regional and world powers appear to have used his Nazi-like dreams in their interests. Just as jihadists, which are fighting against Syria’s Assad, can be useful idiots in the short-term, Turkey has been directly encouraged twice to increase its recent expansionist actions. The first was when US President Trump gave Erdogan the green light to enter Northern Syria, which is now under Turkish occupation. The second was when US Secretary of State Pompeo described the current Armenian-Azerbaijani conflict as one over real estate, interpreted by the Turks as another green light. Without even mentioning Turkish actions against Armenians, NATO’s official website posted, “Turkey is a valued NATO Ally” in its report on NATO Secretary-General Jens Stoltenberg’s October 5 visit to Turkey. This comes on the heels of Erdogan proclaiming, in a July 14 governmental address, “to complete what their ancestors began, this time in the Caucasus,” Erdogan was referring to the 1915 Turkish genocide of the Armenians.

The last time rabid Turkish nationalism was used to such an extent was in the lead up to and during the first world war and British-backing of Arab nationalism to dismantle the Ottoman Caliphate. One outcome of such virulent Turkish nationalism was the genocide of the Armenians, as they were in the way of a Pan-Turkic Empire. Does anybody care if Erdogan proclaims Jerusalem as his city? Apparently not, as Israel tolerates such outbursts along with Turkey’s anti-Semitism.

However, it doesn’t appear that the grand prize is eliminating the Armenians, but rather dragging Iran into a confrontation, probably with Turkey. There have been several reports of Azerbaijani UAVs and shells falling in Iran. Of particular interest is that on October 7, Azerbaijani troops attempted to provoke Armenians into firing into Iran. Many hundreds of Azerbaijani troops purposely placed themselves in a position where Armenian artillery would violate the Iranian frontier. The Azerbaijani soldiers were trapped between Armenian forces and the Iranian border and were decimated by the hundreds. The Armenians urged Iran not to allow Azerbaijan troops to escape into Iran. With northwestern Iran populated with Azerbaijani-speaking Iranians and the Iranian military on high alert along its entire border with Azerbaijan, Iran could be dragged into this conflict. It is no secret Israel has been arming Azerbaijan with not only well over $5B in high technology weaponry, but Amnesty International said on October 6 that Israeli-made cluster bombs are being used against civilians by Azerbaijan.

Turkey, Israel, Pakistan, Islamic jihadists, their supporters, and military suppliers to Azerbaijan are being used to establish conditions where Iran may be forced to react militarily in a way that could not be created by sanctions or internal covert actions alone. Azerbaijan would never have attacked the Armenians of Nagorno-Karabakh or Armenia proper without such allies. Provoking Iran in such a manner could cause the extinction of what remains of the Armenians. I don’t say this as somebody living a comfortable life in some Western European country, but as one who packed up and moved to my homeland, Armenia. My family, friends, society, and nation are under the existential threat of destruction.

The Armenians face what the former mayor of Baku, Hajibala Abutalybov, who served between 2001 and 2018, in 2005 stated in a meeting with a municipal delegation from Bavaria, Germany, “Our goal is the complete elimination of Armenians. You, Nazis, already eliminated the Jews in the 1930s and 40s, right? You should be able to understand us.”

David Davidian is a lecturer at the American University of Armenia. He has spent over a decade in technical intelligence analysis at major high technology firms. Yerevan, Armenia.