A few words to ponder 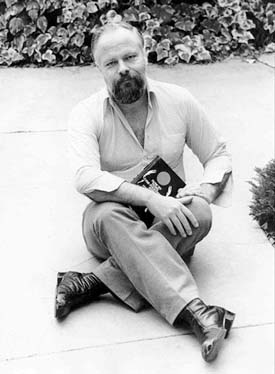 In a world ravaged by a deadly viral pandemic and a nation recovering from a violent coup attempt, the words of famed science fiction writer Philip K. Dick [right] are prescient.

From A Scanner Darkly:

“Strange how paranoia can link up with reality now and then.”

“He wondered how much of the insanity of the day–his insanity–had been real, or just induced as a contact lunacy, by the situation.”

“The authorities were filled with hate.”

“The first thing to depart in mental illness is the familiar. And what takes its place is bad news because not only can you not understand it, you also cannot communicate it to other people.”

From Clans of the Alphane Moon:

“Leadership in this society here would naturally fall to the paranoids . . . But you see, with paranoids establishing the ideology, the dominant emotional theme would be hate. Actually hate going in two directions; the leadership would hate everyone outside its enclave, and also would take for granted that everyone hated it in return. Therefore their entire so-called foreign policy would be to establish mechanisms by which this supposed hatred directed at them could be fought. And this would involve the entire society in an illusory struggle, a battle against foes that didn’t exist for a victory over nothing.”

From The Man in the High Castle:

“A weird time in which we are alive.”

“Death had spread out everywhere equally, over the living, the hurt, the corpses layer after layer that already had begun to smell.”

“We can travel anywhere we want, even to other planets. And for what? To sit day after day, declining in morale and hope.”

From Mary and the Giant:

“Perhaps, at some point in time, at some spot in the world, a moment of responsibility existed.”

“Reality is that which, when you stop believing in it, doesn’t go away.”

“Reality denied comes back to haunt.”

“Don’t try to solve serious matters in the middle of the night.”

Now, consider some of these recently reported quotes:

Jared Kushner to assistant secretary of health and human services Robert Kadlec: “You fucking moron. We’ll all be dead by June.”

White House chief of staff Mark Meadows to Kadlec: “I’m going to fire your ass if you can’t fix this!”

Donald Trump on housing Covid-infected Americans stranded overseas: “Don’t we have an island that we own? What about Guantánamo?”

Donald Trump: “I’ve done all this stuff for the Blacks—it’s always Jared telling me to do this. And they all fucking hate me, and none of them are going to vote for me.”

Donald Trump on South Africa: “Mandela fucked the whole country up. Now it’s a shithole. Fuck Mandela. He was no leader.”

Donald Trump: “Tell me one country run by a black person that isn’t a shithole. They are all complete fucking toilets.”

Donald Trump on Hispanics: “Like the blacks, they’re too stupid to vote for Trump.”

Donald Trump on Covid: “You just breathe the air and that’s how it’s passed . . .And so that’s a very tricky one. That’s a very delicate one. It’s also more deadly than even your strenuous flus . . . This is deadly stuff . . . I wanted to always play it down . . . I still like playing it down, because I don’t want to create a panic.”

Donald Trump on racial justice protests: “We’re going to get ready to send in the military slash National Guard to some of these poor bastards that don’t know what they’re doing, these poor radical lefts.”

Donald Trump to the Department of Justice on satirical criticism of him on NBC by Jimmy Kimmel on “Jimmy Kimmel Live!” and by Alec Baldwin and others on “Saturday Night Live”: “Can something else be done about it?”

Philip K. Dick died in 1982, but he had correctly sensed what was going to happen and that very likely explains his LSD use and subsequent stroke and death at the age of 53.

There is one passage from “The Man in the High Castle” that sort of chills this editor, especially when read phonetically, “And death came as swiftly and soundlessly as it had for Matson.” Having received the Pfizer vaccination, I would hope this is one case where Dick’s crystal ball was particularly blurry.