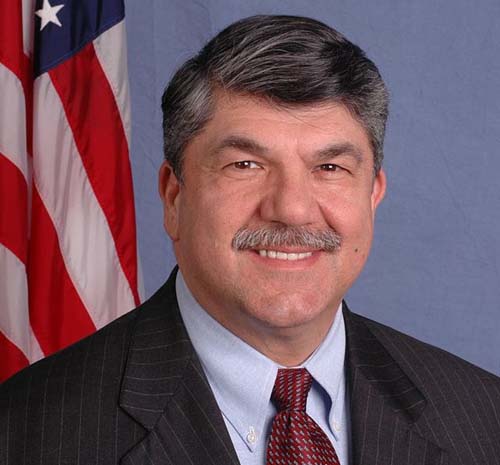 The first time I met Rich Trumka, the president of the AFL-CIO who suddenly died this past Thursday, was in early 2008. I had only been president of the Writers Guild of America, East, an AFL-CIO union, for a short time, and he was then the labor federation’s secretary-treasurer.

We and the Writers Guild West were still in the throes of an historic, nerve-wracking but ultimately successful 100-day strike against the Hollywood film and TV conglomerates and I had traveled to Washington, D.C., with our executive director to see Trumka about an issue involving a conflict with another union. He had arranged for a mediation and the problem quickly was handled in a spirit of conciliation and with efficiency and tact. It was impressive.

As was he: a big, mustachioed, funny but tough and smart guy who knew how to define the heart of any issue and get things done. Part of that was his legal and organizing experience, the rest was pure Trumka. “A truculent fighter who didn’t give up easily,” was how my friend, that knowledgeable labor journalist Steve Greenhouse, described him, and that was so. “A powerful orator who knew how to mobilize workers.”

When we first met for that mediation, I’d been told that Trumka’s office windows opened out on a panoramic view of the nearby White House but on this weekday afternoon the heavy curtains were closed. I asked him why and he growled, “I’m not gonna open them again until that son-of-a-bitch George Bush is out of there.”

Significantly, one of the first to respond to Trumka’s death was Bush’s successor Barack Obama. He tweeted: “From the coal mines of Pennsylvania to the halls of Congress, Rich Trumka was a fierce advocate for working Americans. He loved this country, and he never missed an opportunity to remind us what we can be. Thinking of his family, friends, and federation on this difficult day.”

Trumka, who at one time had been the United Mine Workers’ youngest president (he was 33)—and who worked his way through school as a third-generation coal miner himself—performed a remarkable service for Obama during the 2008 presidential campaign, making a heartfelt pitch not only for the election of the Democratic candidate but also doing his part to chip away, for a while at least, some of the deep-set racism that endangered an Obama victory. Rich traveled around the country talking to blue collar union workers, many of whom were reluctant to vote for the first Black American president.

He told them: “We can’t tap dance around the fact that there are a lot of white folks out there who just can’t get past this idea that there’s something wrong with voting for a Black man. Those of us who know better can’t afford to look the other way.” Obama was the best choice for all working men and women, Trumka said, and there was “only one really, really bad reason to vote against Barack Obama. And that’s because he’s not white.”

In his Washington Post obituary of Trumka, Harrison Smith told the story of Trumka meeting a woman in his Nemacolin, Pennsylvania, hometown who said she couldn’t trust Obama because he was Black. Rich said to her: “Look around this town. Nemacolin’s a dying town. There’s no jobs here. Our kids are moving away because there’s no future here. And here’s a man, Barack Obama, who’s going to fight for people like us, and you want to tell me that you won’t vote for him because of the color of his skin?

“Are you out of your ever-loving mind, lady?”

Two years after we met for that first of many times, I was senior writer at Bill Moyers Journal on PBS and Trumka was a guest. I teased him about the capitalist cravat he wore, a dark red, Brooks Brothers special emblazoned with their Golden Fleece logo.  But his necktie was just a minor concession to the inside-the-Beltway crowd. “There are two economies in this country,” he told Bill. “There’s the real economy that makes things. And there’s the financial economy that was supposed to provide them with the capital to make things…

Rich Trumka was helpful to and supportive of our union on many occasions, showing up when most needed, just as he was there for almost every other union in the AFL-CIO. But he also campaigned on behalf of virtually any and all groups that worked for working men and women whether they were unionized or not.

I will never forget accompanying him one early Friday morning in October 2011 when we visited the activists of Occupy Wall Street. They were just crawling out of their sleeping bags when we arrived and many of them didn’t know who he was, but they could sense his interest and support as we quietly walked through the encampment at Zuccotti Park in lower Manhattan’s financial district. He spoke with everyone, including some hardhat-wearing workers from New Jersey who had come across the Hudson just to see what was going on and to offer their support.

From 2009, in the dozen years he served as AFL-CIO president, another friend, The Nation‘s John Nichols wrote, “Trumka worked to forge a more inclusive, and visionary, labor movement.

“He was the first to say that there was more work to do. And he was willing to do that work—as when he positioned the AFL-CIO in clear opposition to Donald Trump’s presidency; as when he championed Black Lives Matter protests, after the murder of George Floyd Jr., in 2020; as he did in the spring of 2021 with his “Immigrant Rights Are Worker Rights” advocacy.”

During the 2008 Democratic National Convention in Denver, a year before Trumka became AFL-CIO president, there was a meeting of union presidents at which we were told that the party and Barack Obama’s pledge to us was passage of EFCA, the Employee Free Choice Act, legislation which, as Rich described it, “takes the choice of having a union away from the employer, which is where it is right now, and gives it to the employee.” It would have been a major shot in the arm to the labor movement.

EFCA never happened during the Obama years, but it lives on in the Protecting the Right to Organize Act—the PRO Act—passed by the House and currently before the U.S. Senate. “To Mr. Trumka’s mind,” Steve Greenhouse writes, “the PRO Act was an essential tool for adding millions of workers to union rolls. It would make it easier for workers to join unions. It would limit management’s ability to propagandize workers and would create hefty fines for when corporations break the law in battling union drives, for instance, by firing outspoken union supporters.”

Almost every Democratic senator and Rich Trumka’s friend, President Joe Biden, are behind the bill (although passage may be next to impossible until the filibuster is wiped out). Those curtains in the AFL-CIO offices have been flung back, showing off the view of a White House occupied by the most pro-labor president in a long time.

There would be no finer tribute to the life and work of Richard Trumka than to pass the PRO Act. And here’s an added dividend: it would drive Donald Trump, Mitch McConnell, Kevin McCarthy, most of the other GOP legislators—and their deep-pocketed corporate funders—out of their ever-loving minds.

Rich Trumka would love that.

Michael Winship is the Schumann Senior Writing Fellow for Common Dreams. Previously, he was the Emmy Award-winning senior writer for Moyers & Company and BillMoyers.com, a past senior writing fellow at the policy and advocacy group Demos, and former president of the Writers Guild of America East.

This entry was posted in Commentary, Labor. Bookmark the permalink.