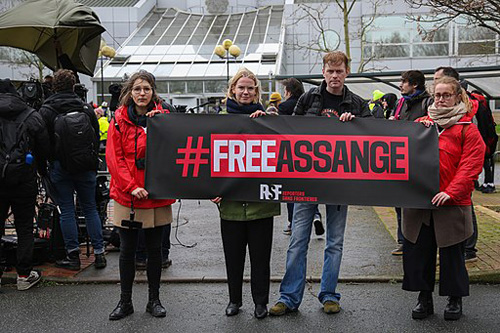 On June 17, UK Home Secretary Priti Patel approved the extradition of Julian Assange to the United States to face 18 criminal charges: One count of conspiracy to commit computer intrusion, and 17 counts of violating the Espionage Act of 1917. If convicted on all charges, Assange faces up to 175 years in prison.

His final recourse is an appeal to the High Court of Justice where, if the history of his case is any indication, he’ll be told that they’re all out of justice and have none for him.

If justice had anything to do with it, previous courts would have thrown out the US extradition request on grounds of both jurisdiction and treaty language. The “crimes” of which Assange is accused were not committed on US soil. And Article 4 of the US-UK extradition treaty forbids extradition for political offenses.

Be clear on this: Assange is a political prisoner, held for and charged with committing … journalism.

He exposed war crimes committed by US government forces in Iraq and Afghanistan, as well as other illegal schemes such as then Secretary of State Hillary Clinton’s attempts to have UN diplomats’ offices bugged.

The US government hates having its crimes exposed and, First Amendment be damned, tries to make examples out of those who dare display its dirty laundry.

While Assange obviously has more skin in the game than anyone else in this particular case, he’s not the real target. The real target is the NEXT journalist who catches the US government acting illegally. The goal is to make that journalist think twice before telling you about it.

For that reason, stopping the extradition of Julian Assange isn’t enough. Nor should we settle for an acquittal in court or a presidential pardon.

Crimes HAVE been committed, and examples DO need to made of the criminals who committed them.

The US Attorneys who filed the indictment—Tracy Dogerty-McCormick, Kellen S. Dwyer, and Thomas W. Traxler—must be charged with violating 18 US Code Titles 241 (Conspiracy Against Rights) and 242 (Deprivation of Rights Under Color of Law).  In addition to any prison sentences, they must permanently lose their licenses to practice law and be disqualified for life from further employment by the US government.

The same goes for their assorted co-conspirators, up to and including sitting and former presidents of the United States.

The US Department of Justice must dismiss the indictment, withdraw the extradition request, publicly apologize for its crimes against Assange, and compensate him richly for years of confinement and torture at its behest.

That’s the absolute bare minimum. Just as Assange was not their real target, they’re not ours. Our target is all the government officials who might, in the future, consider committing this kind of crime again.

This entry was posted in Commentary, Media. Bookmark the permalink.