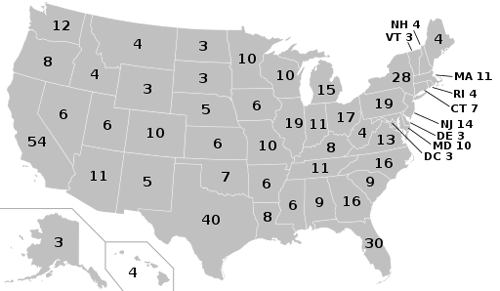 Democrats, the Cato Institute’s Andy Craig points out at The Daily Beast, are trafficking in panic over an upcoming Supreme Court case, Moore v. Harper.

While the case is nominally about who gets to decide whether newly drawn political district lines pass constitutional muster, its particulars intersect with controversy over something called the “independent state legislature doctrine,” and therefore with disgraced former president Donald Trump’s scheme to overturn the 2020 presidential election using slates of fake “alternate electors” to replace the real ones.

If the court gets this wrong, the Democratic Party line goes, state legislative majorities can just throw out presidential election results that don’t go their party’s way, and instead appoint presidential electors who support their preferred candidates.

Craig’s case against the panic is solid: While the US Constitution does say that “[e]ach State shall appoint, in such Manner as the Legislature thereof may direct, a Number of Electors,” it also provides that “Congress may determine the Time of chusing the Electors.” That time is “election day,” currently set by federal law as the Tuesday after the first Monday in November.

Once that election has been held, the electors have been chosen. No backsies. If a state legislature wants to choose electors in some other way, it has to act BEFORE the election rather than in a fit of pique afterward.

There is, however, a larger issue with the “independent state legislature” doctrine, and that issue is whether state constitutions (and state court rulings under those constitutions) may in any way constrain a legislature’s power to “direct” the “manner” of choosing electors.

Could, for example, the Florida Senate and Representatives just unilaterally decide to choose its presidential electors based on the outcome of a bipartisan game of strip poker, where each hand is worth an elector in addition to a discarded pair of boxer briefs?

The answer is no.

Florida’s state constitution specifies the manner of choosing electors, and Florida’s legislature is bound by that constitution.

Where federal jurisdiction is concerned, another part of the Constitution is worth looking at. Article IV, section 4 specifies that “[t]he United States shall guarantee to every State in this Union a Republican Form of Government.”

While we could argue over precisely what constitutes a “republican form of government,” a lawless legislature, declaring itself unbound by the votes of the electorate and the constitution which empowers it to govern, clearly doesn’t meet the standard.

Neither would a military junta which used the Texas Army National Guard to seize control of Austin, or a crank who declared himself emperor of New Hampshire from his Manchester apartment.

State legislatures may only “direct” the way electors are chosen within the strictures set by their states’ constitutions, and they can’t retroactively change those procedures after the date set by Congress for an election.

It seems unlikely that the Supreme Court will use Moore v. Harper to void the US Constitution, state constitutions, and its own power to enforce the “republican form of government” clause.

So don’t panic. Yet.