Mar-a-Lago: a “wretched hive of scum and villainy” 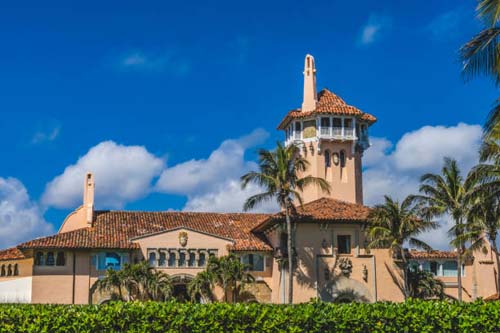 The television news helicopter shots of Donald Trump’s Mar-a-Lago estate in Florida, a suspected major crime scene, reminds one of Obi-Wan Kenobi’s cautionary comment to Luke Skywalker in the first “Star Wars” film: “You will never find a more wretched hive of scum and villainy.” Obi-Wan was referring to the Mos Eisley Spaceport on the planet of Tatooine. The spaceport was a center for various criminals, smugglers, and customs officers on the take. If one could organize a line-up of the members and customers of Mar-a-Lago over the years, it would undoubtedly resemble the nasty-looking clientele of Mos Eisley’s cantina.

It is now known that Trump was storing highly-classified documents in a largely unsecured storage room next to the pool at Mar-a-Lago. Previous attempts, through requests and subpoenas, by the National Archives and Records Administration (NARA) and Department of Justice to secure the documents and files and return them to Washington proved unsuccessful. Trump’s refusal is what led to the court order that authorized the FBI to search for and seize classified documents remaining at Mar-a-Lago.

What occurred to the documents in the twelve months that Trump had stored some 27 boxes of classified material, including Top Secret/Sensitive Compartmented Information (SCI) in his seaside manor? In January of this year, NARA recovered 15 boxes from Mar-a-Lago, some of which contained classified information. NARA referred the matter to the Justice Department. The following month, the House Oversight and Reform Committee requested Archivist David S. Ferriero to provide it with a complete inventory of the contents of the 15 boxes recovered. During the Spring, Trump received a subpoena for the remaining documents he failed to turn over to NARA. In May, a federal grand jury was empaneled as part of the investigation into the documents held at Mar-a-Lago. In June, federal agents visited Mar-a-Lago in search of the still unaccounted for documents. A second subpoena required Trump to hand over security video footage of his estate. Trump’s lawyer signed a statement avowing that all classified documents had been turned over to the government. That was a lie and on August 8, the FBI conducted a search of Mar-a-Lago and seized around a dozen boxes, many of which contained classified documents.

The subpoena for Mar-a-Lago video footage demonstrated the government’s interest in who had visited the estate since Trump left the White House and to what extent they had access to the areas where the classified documents had been stored. Paraphrasing Obi-wan, what “scum and villainy” had been around the nation’s most highly-sought secrets?

Although the membership list of Mar-a-Lago has been kept more secure by Trump than the nation’s secrets he illegally possessed after leaving office, some of the shady members have become known over the years. First, we must take a close look at the Rosencrantz and Guildenstern of Trump’s documents theft caper, former acting Pentagon official Kashyap Patel and one-time fabulist for the Moonie-owned Washington Times John Solomon. Both were named by Trump as his representatives to NARA. Both were heavily involved in the withholding of presidential documents from NARA after it first requested their return.

Patel, who served as the chief of staff to acting Secretary of Defense Chris Miller during the waning days of the Trump administration, has been a vocal supporter of right-wing Hindu nationalist Prime Minister Narendra Modi. In fact, Patel’s extended family hails from Modi’s home state of Gujarat, a hotbed of Hindu nationalist violence, encouraged by Modi and his supporters, against non-Hindus, particularly Muslims, Sikhs, and Christians. Solomon, a former executive editor for the Unification Church’s flagship newspaper, The Washington Times, has been evasive about his role with the documents stored at Mar-a-Lago. He has stated that he, as a “journalist,” was “trying to find the missing Russia-collusion documents.” For whom? Trump? The Russian government? Solomon’s Russia-colluding friend Paul Manafort? Or the country with which the late Sun Myung Moon had a close business relationship, North Korea? The Justice Department and FBI had every right to seize the sequestered documents in Mar-a-Lago from this hive of villainy alone.

What other sort of villainy has been drawn to Mar-a-Lago like flies to honey? There were Chinese nationals Lu Jing, 56, and Yujing Zhang, 33, who were found guilty of trepassing at Mar-a-Lago. Zhang had gained access to the club by falsely claiming to a Secret Service agent at the entrance that she was a member. The government had built a Sensitive Compartmented Information Facility (SCIF)_at Mar-a-Lago, however, it is not known whether Trump stored classified information in the SCIF or whether it was scattered around the property. Zhang, who was arrested on March 30, 2019, on charges of unlawfully entering Mar-a-Lago, was found carrying a bag of electronic devices. In April 2017, Trump had hosted Chinese President Xi Jinping at Mar-a-Lago. Did Xi or members of his party, which would have included Chinese intelligence agents, spot classified documents at Trump’s club? Did that result in Chinese intelligence later attempting to gain access to Mar-a-Lago for espionage purposes?

The Chinese espionage angle regarding Mar-a-Lago does not end with Lu Jing and Yujing Zhang. In 2019, it was discovered that Li Yang, also known as Cindy Yang, Florida massage parlor owner and donor to the Trump campaign, was in the business of selling Chinese businessmen access to top U.S. politicians, including Trump, Florida Governor Ron DeSantis, Representative Matt Gaetz, and other Republicans, many of whom frequented Mar-a-Lago. Yang ran a “public relations” business, called GY US Investments LLC, with her husband, Zubin Gong. Yang gained notoriety in 2019 after New England Patriots owner Robert Kraft was busted for soliciting prostitution at a Jupiter, Florida, massage parlor that Yang once owned in addition to others across the state. Did Yang’s clientele for Mar-a-Lago access include intelligence agents from China, Taiwan, Macau, and Hong Kong, all places where her PR firm conducted business?

Two of Mar-a-Lago’s members are former right-wing presidents of Colombia, Andres Pastrana and Alvaro Uribe. They are also both linked closely to Colombian narcotics smugglers and right-wing paramilitary groups. As president, Trump reportedly had a brief meeting with Pastrana and Uribe at Mar-a-Lago. Were any classified U.S. documents concerning counter-narcotics smuggling operations or money laundering probes exchanged during Trump’s meeting with the two Colombians?

In February 2017, shortly after becoming president, Trump hosted Japanese Prime Minister Shinzo Abe at Mar-a-Lago. During dinner, Trump received a classified briefing on intelligence, information gathered by sensitive sources and methods, on a North Korean missile test. Members of the public and Abe’s aides gathered around the dinner table with their cell phones and took pictures of the classified documents. Such briefings are normally conducted in a SCIF, but that was not the case with Trump. His lackluster belief in protecting sensitive information was on full display for the entire world. And the world’s intelligence agencies had a very good reason to concentrate their resources on the sieve of intelligence at Mar-a-Lago. U.S. intelligence agencies were aghast at Trump’s compromise of U.S. intelligence methods at a dinner table accessible to Abe’s party and Mar-a-Lago members and guests.

At another dinner with Abe at Mar-a-Lago, Trump had invited Chinese massage parlor hand job fan Kraft to join him and the Japanese prime minister at their table. There is no telling as to what intelligence was compromised in that setting. Kraft has been a longtime promoter of Israel, leading three groups of National Football League current and former players to Israel on what have been called “Touchdown in Israel” tours. Kraft is also involved in sponsoring other propaganda operations for Israel, including the Myra and Robert Kraft Passport to Israel program and his company, Kraft Group, has made significant investments in Israel. Another member of Mar-a-Lago is the secretive chairman of Marvel Entertainment, Isaac “Ike” Perlmutter, a native of Israel and significant donor to Trump and Senator Marco Rubio of Florida.

On March 7, 2020, Trump hosted Brazil’s far-right president Jair Bolsonaro at Mar-a-Lago. Discussed at the estate were classified U.S. plans to overthrow President Nicolas Maduro’s government in Venezuela. What, if any, documents on such a covert operation were brought to Mar-a-Lago and, more importantly, did any remain there after Trump’s presidency?

An important question remains in the investigation of Trump’s classified materials cache at Mar-a-Lago. Did his Palm Beach estate serve as a Kwik-E-Mart for the sale of America’s secrets to the highest bidder?