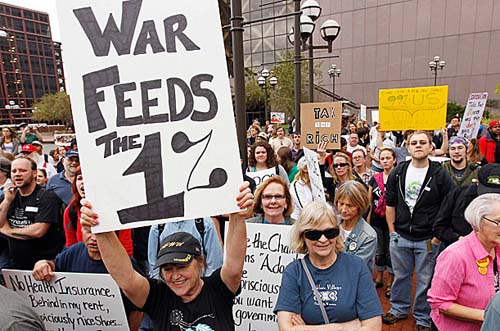 The current crisis of capitalism is textbook Marx. Greedy capitalists, craven politicians, scheming bankers, dispossessed masses. It is also textbook Lenin. Imperial wars awakening the masses to revolt—though the days of Lenin’s competing empires are over. Rather, we are all one big happy family, with the exception of a few blaggards who will soon be “wiped off the map” to misquote a particularly blag blaggard.

Stop! Children, what’s that sound? Everybody look what’s goin’ down.

Yes, we are witnessing a flashback to the heroic days of real protest in the US, as immortalised by Stephen Stills. A remix of “For What It’s Worth,” which Stills wrote in response to a Los Angeles Police Department assault on hippies in 1966.

We have come a long way since. Long hair and peace signs have been replaced by pierced tongues and iPads. Looking back from a half century on, the 1960–70s were the zenith of Western capitalism, a time of unprecedented freedom and opportunity for young people, a time of liberation for black Americans, a time when ideas of socialism were discussed heatedly as a way to move towards a more just world order. And at the same time, a time of employment and full stomachs. Protesters never had it so good.

The ones who set up camp on Wall Street last month have bleak job prospects, massive debts and empty stomachs. As the culprits, they are pointing to stockbrokers, with their wild speculative plunges and surges, orchestrated each day to reap ever heftier commissions, and bankers, with their trillion-dollar bail-outs and million-dollar bonuses, as unemployment and economic inequality across the nation skyrocket. One of the main slogans is “We are the 99%,” in contrast to the wealthiest 1% of Americans whose spiritual home is Wall Street. They have already become a tourist attraction, and have been joined by students, workers and celebrities in increasing numbers.

There’s a man with a gun over there tellin’ me I got to beware.

Stills was addressing police who wielded batons and arrested peaceful youth for not conforming to middle class norms. How quaint. Back then, there were no electric prods and Tasers. The smiling Jimmy Carter had yet to sign off on the Federal Emergency Management Agency, set up to maintain “the continuity of government” (COG) during a national security emergency, inspired by his National Security Council members Samuel (“Clash of Civilizations”) Huntington and Zbigniew Brzezinski. Protesters didn’t face Bush-Obama era state-sponsored torture and even assassination if they called for revolution or an end to empire.

After the hysteria of McCarthyism, suddenly in the early 1960s there were sane voices like Linus Pauling—even a president (until he was assassinated)—calling for the dismantling of the Cold War paranoia. 1966 witnessed Johnson’s “Great Society” welfare programme. The youth of the 1960–70s were empowered, drew a line and engaged in battle for peace, finally bringing an end to the hated Vietnam nonwar (Okay, the Vietnamese resistance, the Soviet Union and China may have had some role).

It was from then on that things went downhill in America . By the late 1970s, along with FEMA, the policy of using Islamists to fight the Communists was put into high gear in Pakistan/ Afghanistan, a policy which indeed succeeded in bringing the Soviet Union down, and, just as important for the empire quashed, the dreams of those youth intent on fighting capitalism, with its inevitable—according to that dusty old Lenin—drive for empire.

All such thoughts have long been banished in today’s Brave New World. Conventional economic wisdom today reads like a self-congratulatory textbook written by neoliberals, who came to prominence in the 1980s and morphed into neocons in the 1990s. But then came 2008 and the new old Wall Street crash.

The textbook for today is an angry, polemical one that must pay tribute to Marx’s Kapital, which insisted “dogmatically” that all along capitalism was fated to continue its march towards greater and greater crises, grasping at war and state terror as the best way to destroy excess production and keep the wage-slaves in line. 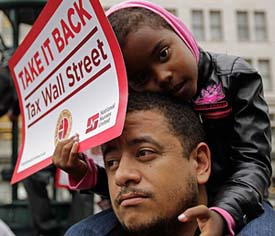 The Occupy Wall Street demonstrations, taking their inspiration from the Arab Spring, erupted after it became clear that the entire edifice pasted together by Carter-Reagan-Bush I-Clinton-Bush II-Obama is a fraud. These politicians cover the entire spectrum of US politics today, from liberal and neoliberal to neoconservative, and they are all equally helpless to change the trajectory of a system out of control.

Perhaps the fatal step that sealed the its fate was a seemingly innocuous reform bill signed by Bill Clinton in 2000, the Commodities Futures Modernization Act, deregulating the derivatives markets and credit-default swaps, a parting gift to his banker friends. But, we can dust off Lenin’s Imperialism, the Highest Stage of Capitalist and read there that international banks naturally become a supranational force under imperialism, and strive to control all politics.

Fast forward a century, and Enron would go on to become the largest corporate fraud in history. Washington would become unashamedly captive to Wall Street. The era of “casino capitalism” and the new old war against Islam unfolded, with no effective voice of opposition, despite all the democratic claptrap. The banks made their grab for total economic (and political) control, moving from 2.4% of the 1950 GNP, when Truman campaigned against them as “bloodsuckers,” to 8.5% by 2010, when Obama bailed them out to the tune of trillions of dollars. Remember, they essentially produce nothing, and if nationalised, would get 0.01% of GNP.

The result was that by 2010 America’s richest 20% had amassed 87 percent of the nation’s wealth. Imagine five people; one gets almost 90% of the pie, three get about 3% each, and one gets 1%. How big is one percent of a pie? How long can that unfortunate 20%-guy survive on a crumb?

Young people speaking their minds.
A thousand people in the street singin’ songs and carrying signs.

Hence, Occupy Wall Street, which has spread like wildfire to 1,400 cities across the US and hundreds more around the world, and still counting. On 15 October, millions of newly energised citizens around the world will be out on the streets. After all, in the era of globalisation, “we are all Americans now,” or rather “all shafted now.” While Obama is surely the brightest of the presidential lot since Stills wrote his classic, whatever textbook he is reading from belongs in the shredder.

Eric Walberg writes for Al-Ahram Weekly. You can reach him at ericwalberg.com. His book, “Postmodern Imperialism: Geopolitics and the Great Games, is available at Clarity Press.