Biden heads to Independence Hall in a mission to save democracy as Republican leaders join an extremist call for a future too horrible to contemplate. 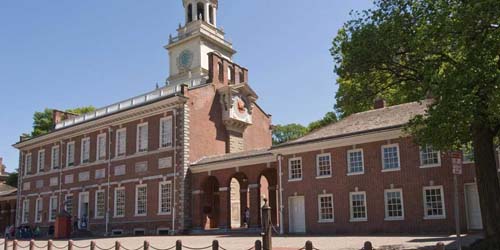 Independence Hall in Philadelphia is where Biden will speak tonight. It is the place where the Declaration of Independence was debated and signed and is a UNESCO World Heritage Site. It is considered a landmark site in the long arduous struggle to establish democracy in the U.S., a struggle which is obviously not complete today and is under threat from a rising fascist element in the country. —NPS.gov

WASHINGTON—As Democratic President Joe Biden prepared to defend democracy in a prime-time speech on Thursday night, Republican predecessor Donald Trump was leading the Republicans, dominated by his MAGA followers, off the deep end into unconstitutional insanity and threats of fascist violence.

Biden coupled his call for a fight to save democracy with a call to the American people to enter the electoral arena in full force this year. Success, he said, will depend “on whether we can elect two more senators” than the party’s current 50.” In addition to saving democracy, the president said, the election can result in giving Democrats in the Senate, for example, a solid majority to overcome Republican filibusters without—though Biden didn’t say so–having to yield on key priorities to renegade Democrats Joe Manchin of West Virginia and Kyrsten Sinema of Arizona.

“We offer a starkly different vision of America, a vision that is better, that is within reach, that is within our hands, if we just vote,” Biden declared. Vote Democratic, he meant, speaking to a partisan crowd.

And it especially includes “protecting voting rights” plus “comprehensive election reform and make sure that no one—no one!—has the opportunity to steal an election again!”

Which is what, of course, Trump tried to do, and is still trying to do. So are most Republicans—at least those running for office this fall.

As Biden pushes democracy, both in Philadelphia and in other speeches, Trump has declared he should be reinstalled in the Oval Office immediately—or the 2020 election re-run all over again. Both such moves are unconstitutional.

And to add to the Republican threat to the safety and security of the nation, Trump’s golfing buddy, Sen. Lindsay Graham, R-S.C., warned that Trumpite legions will erupt in violence if the Justice Department indicts their great leader. Graham also didn’t say that such violence was a bad idea or that Trumpites should not go there.  And that violence is what, unconstitutionally, the ultra MAGAites did in their Trump-urged Jan. 6, 2021 invasion and insurrection into the U.S. Capitol.

Biden’s remarks just two days ago previewed Philadelphia. He also did so on August 26.

Unity on the fundamentals

“We have to unite on the basic fundamental questions that face the country. And one of those questions is whether or not–whether or not we are going to maintain and strengthen our democracy, or are you going to let it continue to splinter,” he told Democratic National Committee members that day.

Trump was openly flirting with fascists long before the November 2020 election which he lost. As he campaigned he refused to say whether he would accept the results and on national television he told the Proud Boys to “Stand back and stand by” in what everyone interpreted as an endorsement of the group. They paid back the favor by crashing through and leading right-wing mobs through barriers around the Capitol the day of the attempted Trumpite coup.

The latest Trump madness began after the FBI entered Trump’s Mar-A-Lago estate a month ago, armed with a judicial warrant to seek and find classified material. That included documents relating to nuclear arms, which Trump illegally carried off when he left the White House. Since then, an irate—putting it mildly–Trump has increasingly spouted off. His craven followers, including top Republican politicians such as Graham, chorus behind him.

Trump’s latest eruption has him violating the Constitution, again. He uses Hunter Biden’s laptop and business transactions, as an excuse—though Biden, the current president’s son, has never been part of the government.

“FBI BURIED THE HUNTER BIDEN LAPTOP STORY BEFORE THE ELECTION knowing that, if they didn’t, ‘Trump would have easily won the 2020 Presidential Election.’ This is massive FRAUD & ELECTION INTERFERENCE at a level never seen before in our Country,” Trump tweeted.

“REMEDY: Declare the rightful winner or, and this would be the minimal solution, declare the 2020 Election irreparably compromised and have a new Election, immediately!”

The capitalization and exclamation point, as usual, was his.

The U.S. Constitution specifically sets the presidential term at four years, and gives Congress the power to determine Election Day. It doesn’t say anything about “declaring the rightful winner.” The electoral vote count, which the Trumpite invaders on January 6 disrupted for hours, but didn’t stop, determines that, the Constitution says Biden won.

The amount of sensitively classified material Trump carted away, under the delusion it was his personal property, almost guarantees an indictment by the Justice Department. And his defiance could lead to obstruction of justice charges, regardless of the mob.

That’s where Graham, who as a former Senate Judiciary Committee chairman, comes in. As a former member of the military’s Judge Advocate Corps, as well as running the Senate panel, he should know better.

Er, no. His excuse wasn’t Hunter Biden, it was Hillary Clinton.

“Most Republicans including me, believe when it comes to Trump, there is no law. It’s all about getting him,” Graham said on Trumpite megaphone Fox News: “And I’ll say this, if there is a prosecution of Donald Trump for mishandling classified information after the Clinton debacle… there will be riots in the streets.”

“If they tried to prosecute President Trump for mishandling classified information after Hillary Clinton set up a server in her basement there literally will be riots in the street,” Graham repeated later.

All this is scary enough that some Republicans are politically running for the hills, trying to shift the conversation to some other topic than refighting the 2020 balloting anew.

Traditional conservative Kinzinger even tells Republican voters that if they must choose between a Trump MAGAite who lies about elections and supports the January 6 coup plot and a liberal, left-wing Democrat, in his words, then vote for the Democrat, who will uphold the Constitution.

But the pro-Trump lemmings, otherwise known as the majority of Republican candidates and officeholders, leaves Biden defending democracy and trying to put the country, constitutionally, back on track. That was his tack in Philadelphia.

Biden previewed the Philadelphia speech in remarks to a Democratic National Committee crowd in the D.C. suburbs on August 26, before hosting a big rally later that evening. After his “semi-fascist” comment, Biden repeated a theme he’s pounded on ever since he began his presidential run:

Battle for the soul of the country

“I think that we’re in a battle for the soul of this country. And I think the American people are waking up to the reality that things have changed so drastically, we better get it back in line sooner than later.

“Did you ever think you’d see a time when we’d have an election and there’d be fighting to see who is the election commissioner so that they can independently count the votes—not the federal government—that it’s an independent determination made locally under a very narrow reading of the Constitution?

“That’s where we are right now. So, we’ve got to win…and I believe, and the data shows, that a significant portion of the Republican Party agrees with us. They agree with the fact that the MAGA crowd has gone much too far—much too far.”

Underlining the extent of the danger posed by Biden is the reality of the growing fascist element in the country.  Right-wingers have declared open season on almost everyone they see as having the potential of blocking their march toward fascism.

Seniors working on Election Day as inspectors at polling places have had their lives ruined by fascist minded Trumpites. An entire group of election workers in a Texas county quit this week because right-wing harassment against them continued since the last election and was stepping up already ahead of the November ballot.

Doctors and nurses providing health care for women have been threatened with everything from lawsuits to physical violence.

Public officials who worked to mitigate the effects of a deadly pandemic are under attack. A governor who tried to do this was almost kidnapped and murdered.

School teachers are afraid to teach history, biology and other subjects.

Librarians and even the record keepers at the National Archives have been threatened and harassed.

Books are removed from the shelves of school and public libraries if they don’t meet the right-wing purity test.

Women, Black, Latino, Naïve American and LGBTQ people are having to battle to save rights they thought they had secured years ago and they are often on the receiving end of physical attacks.

The Internet is used to spread anti-Semitic hatred and violence against immigrants who are grabbed at the border and forced to endure long bus rides as they are shipped to northern cities by right-wing governors using them as political pawns.

Right-wing media spread the lies and offer praise to right-wing dictators like Victor Orban in Hungary.

Election deniers and people who advocate ending the popular vote for the presidency in their swing states are running for office as the official Republican candidates. One of the two major US political parties is now openly and unabashedly led by fascists.

A national offensive against the fascists, led by the president and supported by all progressive and democratic forces is what is called for at this moment. Democrats, independents and even some Republicans repulsed by fascism must all be a part of this movement. What happens between now and November could well determine whether the U.S. moves in the direction of democracy or it moves in a direction too horrible to contemplate.

John Wojcik is Editor-in-Chief of People’s World. He joined the staff as Labor Editor in May 2007 after working as a union meat cutter in northern New Jersey. There, he served as a shop steward and a member of a UFCW contract negotiating committee. In the 1970s and ’80s, he was a political action reporter for the Daily World, this newspaper’s predecessor, and was active in electoral politics in Brooklyn, New York.