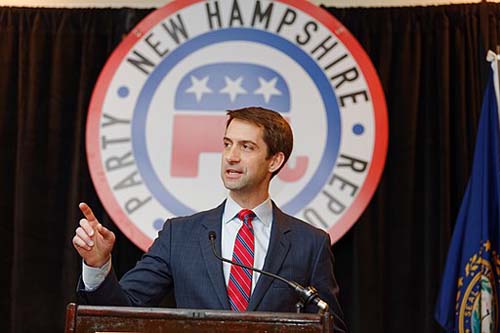 US Senator Tom Cotton (R-AR) doesn’t like ranked choice voting. It’s “a scam to rig elections,” he tweeted on August 31, after Democrat Mary Peltola defeated Republican Sarah Palin in a special election for US House in Alaska.  “60% of Alaska voters voted for a Republican, but thanks to a convoluted process and ballot exhaustion—which disenfranchises voters—a Democrat ‘won.’”

What he leaves out of that claim is that 60% of Alaska voters didn’t vote for “a” Republican. They split their first-choice votes between TWO Republicans, with Peltola getting more votes than either Palin or Nick Begich. Peltola was the second choice of enough voters to give her a majority in the “instant runoff” with Palin.

If this had been a standard “first past the post” election in which a candidate could achieve victory with a mere plurality, Peltola would have won that way too: She received 39.57% of first-round votes to Palin’s 30.79% and Begich’s 28.09%. The ranked choice “instant runoff” merely confirmed that a majority of Alaska’s voters, rather than a mere plurality, preferred Peltola to Palin.

Cotton’s sour grapes tweeting reflects his sense of party entitlement, not any opposition to “rigging elections.”

In point of fact, Cotton’s campaign went to great lengths to “rig” the 2020 US Senate election in Arkansas, sitting on negative opposition research about sole Democratic candidate Josh Mahony until after the filing deadline so that he could hopefully coast to victory in a two-way race with Libertarian Ricky Dale Harrington.

As it turned out, Cotton wasn’t able to clear 2/3 of the vote, even in a deep red state with only one under-funded third-party opponent whom he dared not debate or even acknowledge.

That outcome may explain why Cotton fears and loathes the idea of voters ranking their candidate preferences and making those preferences count,  instead of just heaving a sigh and ticking the box next to whatever supposedly lesser evil one of two parties presents for coronation.

The “major” parties’ shared monopoly on ballot access, debate inclusion, gerrymandering, etc., combines with “first past the post” plurality elections to guarantee political careerists like Tom Cotton the paychecks and power to which they consider themselves as entitled as George III is to his newly acquired throne, crown, and scepter.

Changes that better reflect voters’ priorities and make it more difficult for swamp creatures like Tom Cotton to cling to undeserved power are part of the solution, not part of the problem.