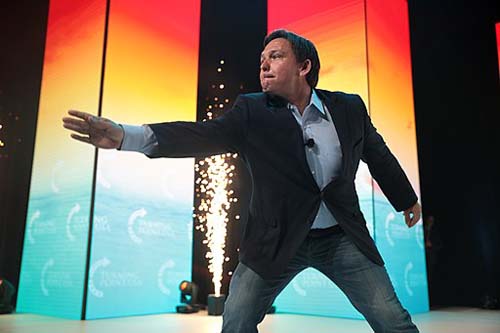 When I wrote my last column on Florida governor Ron DeSantis’s latest scheme to use his state’s treasury as a presidential campaign fund, the whole thing looked pretty silly and counter-productive. With more than half a million unfilled job openings in his state, why is he scooping up immigrants and flying them to Massachusetts instead of letting them improve Florida’s economy?

At the time, I didn’t know the half of it. The whole thing is starting to look, to steal a phrase from Neal Stephenson’s novel Cryptonomicon, “fractally weird.” That is, any single part of it is just as weird as the whole thing.

Let’s start with my first big mistake (or, rather, the first fact I hadn’t known or noticed when writing the previous column):

For all his posturing about immigrants being such a thorn in Florida’s side that he needed a $12 million legislative appropriation to “deport” them to other states, he had to go all the way to San Antonio (nearly a thousand miles from Tallahassee) just to find enough immigrants to fill a plane for his stunt.

Is that even legal? Here’s where it gets even weirder. The $12 million appropriation specifically calls for “a program to facilitate the transport of unauthorized aliens from this state [Florida].”

Not Texas, Florida. Addressing that issue at a press conference, DeSantis threw a Hail Mary.  Many of the immigrants were “intending to come to Florida,” he said, so “you got to deal with it at the source.”

If you hold your mouth just right and pretend words don’t mean things, he was just generously saving them some travel time, see?

But it looks like he partly covered his bases on the legal end, too. He had the immigrants flown from Texas to Florida before flying them from Florida to Martha’s Vineyard.

So it’s all good, right? Except one wonders where he got the money to import those immigrants to Florida before exporting them to Massachusetts. The appropriation doesn’t seem to cover that.

Perhaps weirdest of all is his choice of Martha’s Vineyard as a destination. I hear conservatives chuckling about giving the “coastal elites” a dose of immigrant presence, but the island in question isn’t exactly an elite place, or light on immigrant numbers. Fully 20% of its population are Brazilian immigrants, not counting people from other countries, and its per capita income lags both Massachusetts’s as a whole …  and Florida’s.

Sure, a lot of the “elites” vacation on Martha’s Vineyard. But they vacation AND retire in Florida. And hey, we’ve got TWO coasts. How “elite” does that make us?

The only one way to make any sense of this whole circus is to treat the $12 million appropriation as a taxpayer contribution to Ron DeSantis’s presidential campaign fund. He’s a poster boy for the old saying that politics makes people stupid.