“Respect for marriage?” Not really. 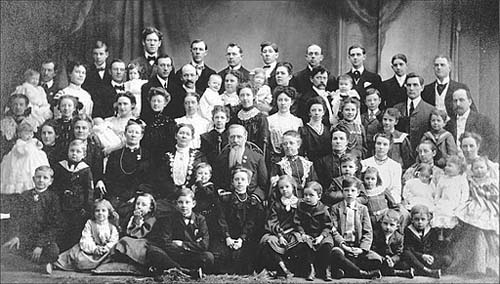 Joseph F. Smith (then president of the Church of Jesus Christ of the Latter Day Saints) with five wives and their children, circa 1904. Public domain.

On November 16, the Respect for Marriage Act achieved 62 votes for “cloture” in the US Senate, meaning that it will proceed to floor debate and likely—after reconciliation with the House version, which passed in July—become law.

That’s a good thing, but let’s not make it more than it is. The long title of the bill reveals its true purpose: “A bill to repeal the Defense of Marriage Act and ensure respect for State regulation of marriage, and for other purposes.”

The bill has two core provisions.

First, it applies the US Constitution’s Full Faith and Credit clause to “marriage between two individuals.” If two people—ONLY two people—get married in Massachusetts then move to Texas, Texas has to recognize them as married.

Second, it requires the federal government to recognize a marriage “if that individual’s marriage is valid in the state where the marriage was entered into.”

Both provisions are all well and good, but “respect for state regulation of marriage” isn’t the same thing as “respect for marriage.”

Actual respect for marriage would involve getting both federal and state governments completely out of the business of deciding who can be, or is, married.  Not just “on the basis of the sex, race, ethnicity, or national origin of those individuals,” but completely.

Marriage is one or both of two things: A personal commitment (often, but not always, with religious implications) and/or a contract.

The personal commitment side is not and never has been any of government’s business.

If I get in a car, turn the key, and start moving down the road, am I driving? Yes, I am—even if I don’t have a license from the government to drive.

Likewise, if I get married, I’m married whether or not I have a license from the government to be. I’ve been married for 22 years. No government license, and no need for one. It just so happens that I’m married to one other person rather than, say, five other people, but in the latter case I’d still be married, whether government “recognized” that or not.

The only relevant questions, where government is concerned, surround whether the parties to a contract consented (and were competent to consent) to and complied with its terms.

Good start. But let’s take this all the way.