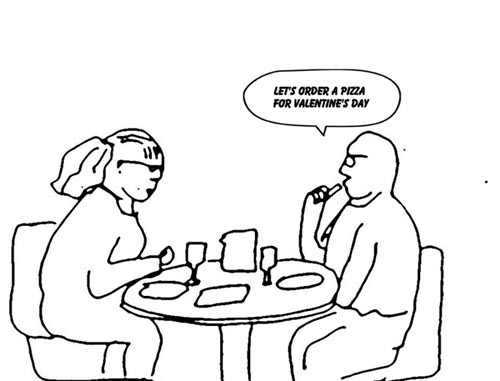 A recent poll revealed that while women plan their holiday gifts in advance, men often buy them at the gas station on the way to a family gathering. So it is no wonder that men’s Valentine’s Day gifts are often as inappropriate as their Christmas and birthday gifts. Here are some mistakes men repeatedly make on Valentine’s Day which you should avoid.

1) Size insults. Buying an article of clothing that is too small for your wife to wear is obviously a mood destroyer. But so is buying something that is too big. (“You thought I was THAT size.”) Even slippers can be an insult since women’s feet are not as big as men’s (and they are NOT smaller so we can get closer to the kitchen sink). Many a woman has shuffled along in bedroom slippers the size of snowshoes because of men’s size perception challenges.

4) Lighting insults. Telling your wife she looks beautiful by the light of one candle is a left-handed compliment. Impaired observer compliments haven’t worked since Blanche DuBois covered the light bulbs in Streetcar Named Desire to look younger.

5) Restaurant insults. If you take your wife out to eat make sure it’s not a restaurant with counter service or giggling tweens in the next booth. Steer clear of restaurants that gives you a beeper that vibrates when your order is ready, play oldies and expect you to bus your own table. She busses enough tables at home.

6) Housework insults. Is your idea of “helping” with the housework lifting your legs while she vacuums around you and you watch TV? Do you think rubber gloves, a dust mask and eau de Lysol make a woman feel alluring? Roll up your sleeves and help. (And that doesn’t mean watering the plants.)

7) Gift insults. Don’t buy your wife a gift that you would secretly like to have yourself like a seed tiller or new drill bits from the hardware store. She doesn’t give you new linens, a coffee pot or a yoga mat for Valentine’s Day, does she? Besides, the metallic object in a small box she might crave is probably not a drill bit.

Martha Rosenberg’s first book, “Born With A Junk Food Deficiency: How Flaks, Quacks and Hacks Pimp The Public Health,” will be published by Prometheus Books in April 2012.

This entry was posted in The Lighter Side. Bookmark the permalink.