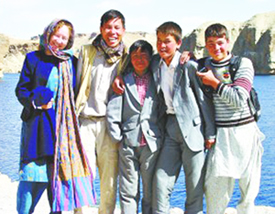 Saturday, Americans sent two very important and very different communications to our friend Dr. Wee Teck Young, a Singaporean physician and activist who lives and works in Kabul, Afghanistan. The “We love you!” was a press release announcing that the Fellowship of Reconciliation (FOR) had awarded him their “International Pfeffer Peace Prize” in recognition of his contributions to peace working with dedicated young Afghans in Kabul.

The “Stay out!” was from the American government, refusing him a visa to enter the United States with these young people, in the furtherance of this work. It seems all too likely that the actions and choices which have earned him his well-deserved award are the same factors that persuaded U.S. consular officials to deny him entry to the United States. The question is whether we can be a voice to affirm that his work, and the work of the young Afghans working with him, has value in the United States, where awareness of the costs of war, and of the lives of ordinary Afghans, is desperately needed.

U.S. consular officials considering a visa application want, perhaps above all, strong assurances that prospective travelers will have compelling interests calling them back home when their visa expires. They look for conventional signs of a family, an income, a job—all of which our friend Dr. Wee Teck Young has given up in the cause of peace.

Although a qualified physician fluent in several languages and educated in leading Singaporean schools, Dr. Wee Teck Young earns no income, has no more personal belongings ( except his guitar ) than will fill a duffel bag and his family, for all intents and purposes, has been the small community of young Afghan Peace Volunteers ( APVs ) with whom he has shared quarters nearly identical to those of Afghan villagers well below the poverty line. He shuns his official title, preferring “Hakim,” the name bestowed on him after he had served as a public health doctor among refugees on the border between Afghanistan and Pakistan. In the Dari language, “Hakim” means “learned one and local healer.”

In his work over the past decade, he’s been guided by people such as Leo Tolstoy, Khalil Gibran, Mohandas Gandhi and the Rev. Dr. Martin Luther King, studying and sharing their teachings on nonviolence. FOR’s 2012 press release says that award recipients are “change-makers” whose grassroots efforts have “inspired countless others to join the cause to end war and strengthen peace.” Hakim’s efforts with the Afghan Peace Volunteers have reached people around Afghanistan and around the world with courageous interethnic solidarity walks, a campaign of internet video messaging, monthly “Global Days of Listening” phone conferences conducted via skype and the hosting of scores of international visitors in Kabul.

Having built strong bonds with peace activists all over the world, including several of them making a 21 day trip to India in 2011 to visit Indian peace groups, the logical next step is for them to visit the United States. The APV’s aims are simple. They want other people to understand why they want to live without war. They don’t want their futures to be dictated by others, and they are tired of being defined as people dominated by a desire for revenge and retaliation. They prefer forgiveness and love.

Theirs is a message which U.S. people should hear. A first step toward bringing even a few of the APVs to the U.S. involves gaining the confidence of the U.S. consular officials that Hakim does not plan to abandon the APVs and his work and come chase a comfortable lifestyle in the U.S. We can be of signal use in easing U.S. authorities of any such concern, given Hakim’s history of consistent commitment to his values and work.

This is the community Hakim loves: When I last visited the dozen-strong APV family in Kabul, a small “school” was already flourishing in the yard of their four-room house. Children who the APVs have encouraged to stop working as street vendors are now enrolled in public schools and participating in an after-school tutoring program with the APVs as their tutors. Mothers of the children will soon be coming to the APV home for seamstress training. Meanwhile, the APVs themselves are attending secondary school and university courses, all the while working to encourage newcomers to nurture self-reliant inter-ethnic communities.

The APV Kabul community today stems from an experiment that Hakim worked out when he was teaching a workshop at the Bamiyan University in 2008. He had invited a multiethnic group of Pashtuns, Tajiks, Hazaras, Uzbeks and Turkmen to live together for a semester. The experiment stirred up conversations in the community, but it was enough of a success to inspire Hakim to gather more young volunteers. The group that formed in 2008, originally called Our Journey to Smile, later became the Afghan Youth Peace Volunteers, now the APVs. As the FOR award press release stresses, “Hakim humbly attributes the APVs’ creation and sustaining energy to the young people themselves. The compassionate message from their hearts, evident as they spoke to him of their wish to live without war, continues to be his inspiration.”

After learning that FOR had chosen to honor them, Hakim and the APVs graciously declined to participate in a public award ceremony. They feel grateful for the affirmation of their work, but they want all Afghan workers for peace to be celebrated for their common struggle.

Here are some links to videos and articles about the APVs:

The APVs’ interest in coming to the U.S. stems from an invitation they’ve received to accompany the U.S.-Mexico “Caravan of Peace” which is traveling across Mexico and the U.S. later this summer, campaigning for an end to drug wars and the violence they entail. Hakim and the APVs have been in contact with internationally renowned poet-activist Dr. Javier Sicilia who is leading the caravan after losing his son to Mexico’s drug war. Sicilia’s son, who was near completion of his studies to be a public health care professional, was found smothered to death in the trunk of a car after a murder attributed to drug war violence. Sicilia wrote a poem in homage to his son and then declared that it was the last poem he would ever write. Instead, he vowed to dedicate himself to nonviolently resisting drug wars and drug related violence.

We want the APVs to be able to work with him, and speak to Americans on this issue. Hakim has known since his past volunteer work with Singapore’s Anti-Narcotics Association and Teen Challenge (a drug rehabilitation center), that criminalizing drug use and building even more prisons around the addicted only exacerbates what is a medical and not a judicial (or military) problem. Now we have an opportunity to bring Hakim for a ten-day stretch of the Caravan through Midwestern and northeastern U.S. cities, ending in Washington, D.C.

Singaporeans are not required to obtain a visa for entry to the U.S. However, Hakim had previously chosen to forego the waiver right, in 2010, and applied for a visa along with two Afghan Peace Volunteers, Abdulhai and Faiz, hoping that if he accompanied them, they would be less intimidated by the application process and the interview which is held inside a labyrinthine U.S. Embassy in Kabul, Afghanistan. In retrospect, it might have been an unfortunate choice. The U.S. consular official in Kabul rejected all three of their applications, and once you’ve been rejected, it’s quite difficult to obtain a visa the next time you apply. Hakim reflects, “I remember the three of us walking out of the Embassy onto the guarded streets feeling dejected. I noticed 13 year old Abdulhai’s despondence and heavy feet; it hurt me that young Afghan students who were trying to figure out a non-violent way of life were quickly getting discouraged. Reconciliation work isn’t easy.”

On Friday, June 29, 2012, Hakim’s visa application in Singapore was again refused. Now, with two rejections, the likelihood of Hakim arriving in the U. S. on time to be part of the Peace Caravan seems slim.

And yet, the State Department or a U.S. consular office does listen and, with sufficient appeals, has been known to grant subsequent visas upon reapplication.

And so we urge readers hopeful for Hakim’s work, and any of their contacts that they feel will be supportive of and inspired by it, to immediately email the following, asking that Dr. Wee Teck Young be issued a non-immigrant U.S. visa.

Please visit the Voices for Creative Nonviolence website, www.vcnv.org for sample letters of support and addresses to which they can be sent.