Preventing the coming U.S. disaster in the Caucasus

The United States is risking a disastrous renewal of war in the Caucasus between Armenians and Azeris over the breakaway Armenian-populated Republic of Mountainous Karabagh (RMK, or Artsakh in ancient Armenian). 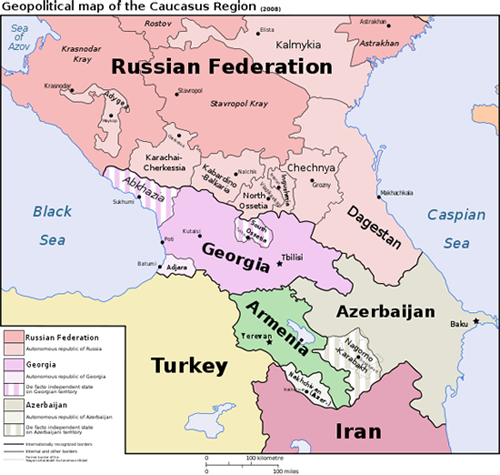 A new war between Azerbaijan and RMK (with its ally, Armenia) would undoubtedly destroy much of Azerbaijan’s energy industry. This includes key Azeri oil and gas pipelines which lie just a few miles north of RMK and snake through Georgia and Turkey.

Azerbaijan’s economy and corrupt government are massively dependent on oil and gas revenue and would be in deep trouble. The already conflict-ridden Caucasus—recall the Abkhazia stalemate and 2008’s Russian-Georgian war over South Ossetia—would be hopelessly destabilized. U.S. policy, in particular, would lie in tatters.

As expected, the conflict’s mediators—the U.S., Europe, and Russia—have an insatiable greed for Azerbaijan’s substantial oil and gas deposits. Yet had they, especially the U.S., formally recognized RMK’s independence from Azerbaijan, the conflict would have been resolved years ago. Such recognition remains the only practical and just solution.

Azerbaijan would be unhappy, yes, but would continue to sell most of its oil and gas to the West. Azeris will never sell only to Russia. That would bind them too tightly to their former overlord.

The conflict in Mountainous Karabagh broke out in the late 1980s just after its Armenian majority, long abused by Azerbaijan, peacefully declared its desire for union with Armenia.

Azerbaijan replied with murderous attacks against Karabagh civilians. Mobs hunted down and killed Armenians in the Azeri cities of Sumgait and Ganja. After the USSR dissolved in 1991, RMK held a referendum boycotted by Azeris. It voted for independence. Azerbaijan’s response was full-scale war.

Even with help from Turkish military officers and paramilitaries, and Afghan Mujahedin, Azerbaijan lost the war. A ceasefire was declared in 1994. Yet almost daily Azerbaijan threatens a new war and snipes across the contact line.

Pumped up with billions in oil and gas revenue, Azerbaijan’s $3 billion military budget dwarfs Armenia’s entire national budget. But Armenian troops are universally acknowledged to be better trained and to possess much greater esprit de corps because they are defending their ancient lands.

But the U.S., Europe, and Russia might be coming to their senses. A few years ago, they proposed that RMK’s 100,000 mostly Armenian citizens decide its formal status in a referendum. In return, Armenians would hand over vast tracts of territory to Azerbaijan.

Azerbaijan rejected this compromise. It insisted, unreasonably, that its entire population of nearly 10,000,000 must participate in such a referendum so as to outvote RMK’s 100,000 people.

How solid is RMK’s case for independence? Very.

On every measure—history, demographics, and sheer decency—RMK has as good a case as other nations, such as South Sudan, East Timor, and the republics and regions of the former Yugoslavia, that have recently been freed from their overlords.

Since 1994, RMK has been a functioning, democratic, de facto independent state.

Ancient Greek and Roman historians—Strabo, Pliny the Elder, and others—testify that Artsakh/Mountainous Karabagh was part of Armenia since before the time of Christ, and has always had an Armenian majority.

Only a thousand years later did Turkic-speaking nomadic tribes from Central Asia begin dribbling into the Caucasus. At no time, however, did they or Muslims constitute more than a fraction in Mountainous Karabagh itself. An 1823 Russian survey reported it to be 97% Armenian.

From 1918–20, Azeris—in a pan-Turkic alliance with Turkey—attacked and massacred thousands of Armenians in and around Karabagh. Shortly thereafter, Russian Bolsheviks—allied with Kemalist Turkey at that time—Sovietized the Caucasus.

Lt. Col. John C. Plowden, a British military representative in the Caucasus, reported in 1919 that Mountainous Karabagh is “the cradle of their [Armenians’] race . . . Armenian in every particular and the strongest part of Armenia, both financially, militarily and socially.”

But in 1921, Stalin, the Soviet Commissar for Nationalities, gifted Mountainous Karabagh to Azerbaijan, probably to curry favor with Turkey. Karabagh was thereby artificially and physically severed from Armenia, mere miles to the west.

Azerbaijan deliberately neglected not only Karabagh’s economy and roads, but also its communication and transport links with Armenia. Law enforcement positions were filled with Azeris, even though they were a minority. Armenians protested to Moscow in vain.

An Azeri policy of depopulation caused 30% of Karabagh’s Armenian villages to disappear between 1926 and 1980.

Were RMK to fall under Azeri control again, it would inevitably suffer the same fate as Nakhichevan, another Armenian province that Stalin gifted to Azeris.

Under Azeri rule over the past decades, Nakhichevan has been totally emptied of its Armenians.

One Azeri official has actually declared that “Armenians have never lived in Nakhichevan.” Since the existence of Armenian buildings, churches, and monuments disprove such absurd claims, Azeris have undertaken to deface or level them in Nakhichevan and elsewhere.

In 2005, for example, Azerbaijani servicemen used sledgehammers and machinery to completely destroy thousands of ancient Armenian Khachkars (intricately carved stone crosses) in a cemetery in the city of Julfa. The Azeris were caught in the act from across the border. The astonishing video is on the Web.

The destruction has been compared to the Taliban’s dynamiting of ancient Buddhist statues in Afghanistan. Azerbaijan has banned foreign observers and ambassadors from the site.

Due to their falsifying others’ history and culture, we are compelled, sadly, to examine Azeris’ own roots.

The invention of Azerbaijan

Most people are unaware that “Azerbaijan” was created as a country—out of thin air—in 1918, just after Russia’s Bolshevik Revolution.

The region’s Muslims had never been known as “Azeri,” an ethnicity that had never existed. Rather, they called themselves Turks, Tartars, or simply Muslims. Large numbers of Armenians, Georgians, and others also inhabited that same territory.

Prior to 1918, “Azarbayjan” referred merely to two provinces—not a country—in northwestern Persia (Iran). These were always located strictly to the south, below the Arax River, of the artificially-created Azerbaijan of 1918.

The so-called Azeris speak a Turkic language. But the word Azerbaijan is actually Persian, not Turkic. It is derived from the name Atropates, a Persian governor appointed by Alexander the Great around 327 BC.

The Azeris probably chose the name “Azerbaijan” in 1918 to further their designs on Iran. Indeed, during and after WW 2, the Soviets tried unsuccessfully to carve out a “People’s Republic of Azarbayjan” in Iran’s northwest.

Not surprisingly, after a year in Baku, Bryza joined the Istanbul-based Turcas Petrol Corporation, a partner of the State Oil Company of Azerbaijan (SOCAR).

Israel, known for its influence on U.S. policy, and some Jewish American organizations, have allied themselves with Azerbaijan. 30% of Israel’s oil imports come from Azerbaijan. Israel is selling $1.6 billion dollars’ worth of advanced weapons, including drones, to Azerbaijan, which is threatening to use them against RMK.

The RMK conflict is not unsolvable. The facts are clear. Azerbaijan has no valid claim to RMK. Yet U.S. support of Azerbaijan may drag it into war.

America must take the lead and formally recognize RMK’s independence. Europe and Russia will follow. The alternative may be another U.S. war whose cost in blood and money we Americans cannot afford.

The author is a freelance journalist. Many of his articles are archived at armeniapedia.org/wiki/David_B._Boyajian.