A terrorist training base that specializes in car bombings

(WMR)—For some three decades, local residents near a top secret terrorist training base have reported on hearing explosions, seeing sudden flashes of light and night time flares, and noticing small planes and “black helicopters” arriving at and departing from a small airfield on the base. The airspace over the base is off-limits to unauthorized aircraft.

The base is not in Pakistan’s restive Waziristan region or in Lebanon’s Bekaa Valley but in northeastern North Carolina on Albemarle Sound, near the town of Hertford. Officially known as the Harvey Point Defense Testing Activity the base, which was once a Navy Supply Center, actually serves as a paramilitary training course for the CIA and allied intelligence and paramilitary services, including Israel’s Mossad and Britain’s Special Air Services (SAS). On march 20, 1998, The New York Times reported that during its existence, Harvey Point trained 18,000 foreign intelligence operatives from 50 different countries.

Among those terrorists trained at Harvey Point were those who worked for the Chilean military junta of General Augusto Pinochet, El Salvador’s death squad chief Roberto D’Aubisson, Egypt’s General Intelligence Directorate, Katangan secessionist leader Moise Tshombe, Angola’s UNITA guerrilla force, Colombian counter-insurgency personnel, Laotian anti-communist paramilitary forces, and Arab cadres who would later join Osama bin Laden’s forces fighting against the Soviets in Afghanistan. One can only contemplate how such regulars and irregulars from the far-flung corners of the world reacted to eastern North Carolina cuisine, including the barbecued pork, hush puppies, and steamed crabs.

First used to train anti-Castro Cubans for the Bay of Pigs invasion in 1960, the base has seen Lebanese Phalangist militia train for the failed March 8, 1985, west Beirut car bombing assassination attempt against Lebanese Shi’a spiritual leader Muhammad Hussein Fadlallah, who was also known to be a leading figure in Hezbollah. Although Fadlallah escaped assassination, the car packed with 440 pounds of dynamite leveled an apartment building and a movie theater, killing 80 innocent people, including women and children, and injuring some 300 others.

As the United Nations Special Tribunal for Lebanon stands ready to indict key members of Lebanese Hezbollah for the February 15, 2005, massive car bombing that took the life of former Lebanese Prime Minister Rafik Hariri, it is noteworthy that it has been the CIA, along with its Lebanese allies and Mossad agents trained at Harvey Point who have specialized in the urban car bombing tactic used so often over the past several decades in Lebanon. And as WMR previously reported, it was these same elements—CIA, Mossad, and their Lebanese assets—that jointly carried out the Hariri car bombing assassination.

An article titled “CIA Missions Have Mysterious N.C. Roots” in the June 28, 1978, Virginia-Pilot and Ledger-Star reported that the Harvey Point base, described as an annex of the CIA training base at Camp Peary, Virginia, was being used to train CIA operatives in car bombings. The paper noted that every few days, Navy trucks hauled batches of new passenger vehicles into the base and every few days cars that were totally demolished were trucked out of the base. Some local residents described the vehicles: some had their hoods blown off while others were smashed flat.

In December 1999, a rumbling from the base, which lasted for up to five seconds, was so strong that thousands of people in the region believed it to be an earthquake. The US Geological Survey said it did not register any quakes in the region.

In 2009, the CIA conducted a security survey of the Elizabeth City water plant and found that security controls were lacking. The CIA pressed local officials to beef up security for the plant.

Former CIA operative Robert Baer wrote in his book, “See No Evil,” that his two weeks of training at Point Harvey was, for all purposes, an “advanced terrorism course.” Baer was trained in the use of plastic and other types of explosive materials. It is believed that former CIA and Chilean DINA intelligence agent Michael Townley, convicted in 1978 for the 1976 car bombing assassination in Washington, DC of former Chilean Foreign Minister Orlando Letelier and his American assistant, Roni Moffitt. Townley became part of the federal witness protection program in 1978 after his conviction in the murder of Letelier. However, Townley was spotted in Stockholm in 1986 a week before the assassination of Swedish Prime Minister Olof Palme.

After 9/11, CIA paramilitary operatives who were assigned to the agency’s Special Activities Division (SAD) and deployed against the Taliban in Afghanistan were first trained at Harvey Point. 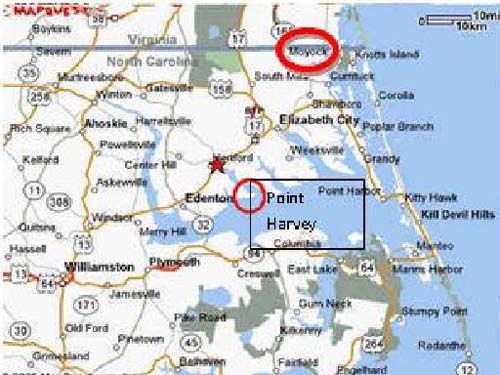 With the current controversy raging about the roles that acting CIA station chief in Pakistan Raymond Davis and suspected CIA agent Aaron DeHaven, both jailed in Pakistan—Davis for murder of two Pakistani nationals and DeHaven for visa violations—may have played in false flag terrorist attacks in Pakistan, there is an interesting footnote to Harvey Point. Just north of the CIA terrorist training facility, past Elizabeth City, lies the sprawling Moyock, North Carolina training facility of the company formerly called Blackwater and now known as Xe Services. Now known as the United States Training Center, the Moyock facility is on a former U.S. Navy installation that once hosted a U.S. Naval Security Group Activity listening station that was part of the National Security Agency’s global signals intelligence eavesdropping network.

Harvey Point is used by Navy SEALS/Underwater Demolition Teams for training. Blackwater founder Erik Prince had served as a Navy SEAL and many of his early Blackwater employees were ex-SEALS. Their numbers were later supplemented by retired CIA officers. Navy SEALS/UDT and CIA teams trained at Harvey Point in the 1980s for the illegal planting of mines in Nicaraguan waters. In 1990, personnel trained at the base unsuccessfully attempted to capture Colombian drug lord Pablo Escobar in the secret “POKEWEED” operation.

In 2008, the U.S. government used an eminent domain acquisition to procure the Moorman Pine tract adjacent to Harvey Point for use by the CIA base. The owners of the tract acquired the property in 2002 for a golf and residential project. The owners settled with the government for $5.8 million.

The operations of Harvey Point and Moyock appear to complement one another and jointly place a huge secretive CIA footprint in northeast North Carolina.