The GE salmon is leaping toward our tables 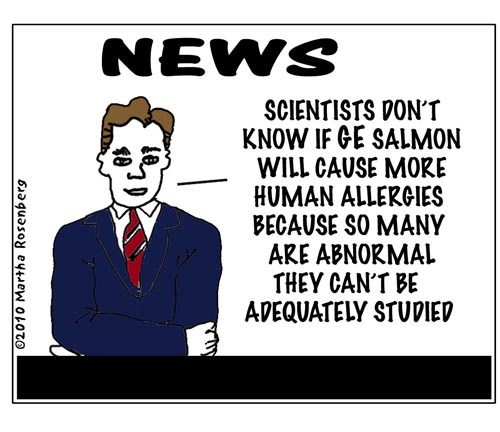 The genetically engineered AquAdvantage salmon, (AAS), often referred to as a “Frankenfish, is moving through the FDA approval process despite doubts raised at 2010 hearings, in scientific reports and by 400,000 consumers.

The genetically modified salmon, created by Boston-based AquaBounty Technologies, is created to grow twice as fast as wild Atlantic salmon—reaching its full size in 18 months instead of three years. It was created by inserting the coding sequence from a Chinook salmon growth hormone gene under the control of an “antifreeze protein promoter and terminator” from ocean pout into wild Atlantic salmon. No wonder it’s called a Frankenfish.

Ninety-five to 99 percent of AAS are sterile, said AquaBounty at FDA hearings in 2010, so they are unlikely to breed and threaten wild salmon stocks if they escape. (If they did breed, though, it could Jurassic Park-like since AAS eat five times more food than wild salmon and have less fear of predators, according to background materials.) Nor is 1 to 5 percent a small amount considering the 15 million eggs AquaBounty plans to grow: that could amount to 750,000 fertile fish.

To prevent such risks, AquaBounty told an FDA advisory committee it plans to grow the eggs at a facility on Prince Edward Island in Canada, where escapees could not survive. “Water from the facility, including effluent from all floor drains, fish tanks and egg incubators, eventually discharges” into a tidal river that flows into the Gulf of Lawrence, says the AquAdvantage FDA briefing package. Because water temperatures in the winter months are very low and the water has a high salinity, “it is highly unlikely that early life stages of any Atlantic salmon at the facility would be able to survive if they were able to escape.”

But escape into the Gulf of Lawrence is not the only risk. AquaBounty also has safety plans for the adult salmon, which it plans to grow out and slaughter in the country of Panama because that environment is also hostile to survival. “In the lower reaches of the watershed, the water temperature is in the range of 26 to 28 degrees C, at or near the upper incipient lethal level for Atlantic salmon,” says the FDA report. “As a result, it is extremely unlikely that AquAdvantage Salmon would ever be able to survive and migrate to the Pacific Ocean.”

In the FDA briefing report, AquAdvantage salmon were also found to have high incidences of “jaw erosion” and “focal inflammation” (infection), though the defects are said to be “of low magnitude and not likely to be debilitating to fish in a production setting.” What about the people who eat them? The report also identified low glucose levels and a possible “increase in the level of IGF-1 [insulin-like growth factor-1] in the AquAdvantage salmon compared to sponsor control fish.”

Perhaps most troubling at the FDA hearings was AquaBounty’s policy for handling dead fish in Panama. In its Environmental Assessment report, it says, “As dead fish are deposited, they will be covered with caustic lime, followed by another layer of dead fish and caustic lime, and so on, until the burial pit is ~0.5 m deep, at which point it will [be] sealed with plastic and covered with soil. Successive pits will be located at a minimum distance of 0.5–1.0 m from those used previously; the aggregate collection of such pits will be located on high ground that is not within the 100-year flood plain. . . . In the event that disposal capacity at the site is inadequate to handle the immediate or aggregate waste volume, alternative means of disposal will be sought.” Why are so many fish expected to die?

There are also questions about the GE fish’s allergic potential. When FDA food scientists Kathleen Jones and Kevin Greenlees presented AquaBounty’s AquAdvantage salmon allergy studies at 2010 hearings, members on the committee considering the approval were appalled at the “science.”

How can safety be determined for levels of allergens when a number that would “unsafe” has not been determined asked members of the Veterinary Medicine Advisory Committee. It’s as if “you selected a particular allergen in goat meat and another allergen that was in sheep meat and you compared the two and you found a significant difference but both of them were at irrelevantly low numbers,” said Louisiana State University’s David F. Senior, who chaired the committee. “Who cares?” Other members berated the low numbers of ﬁsh used in studies, the inclusion of irrelevant ﬁsh in studies which “diluted out the power of the study,” and the generally bad science.

And not only were the studies low powered, some having only six or seven fish in them, there were errors in studies! James D. McKean, with the Department of Veterinary Diagnostic and Production Animal Medicine at Iowa State University, noted there were six “controls” in Table 15 and “in Table 16, there are 7. And I am still unclear as to where that extra sample came from?”

“Nothing reliable can be gained from this study,” said Craig Altier, DVM, from the College of Veterinary Medicine at Cornell University about other data presented, calling the work a “real mess.” This “is an important thing to study and the experiment was a bust, why hasn’t it been done again?”

The briefing packet even, says the FDA, cannot determine if the AquAdvantage salmon would cause more allergies than other ﬁsh because excessive culling of “abnormal” salmon and other “technical ﬂaws” in AquaBounty’s study so “skewed” data as to “limit its interpretation that we cannot rely on its results”! What? Why are so many fish expected to be flawed—and why is approval even considered?

The brieﬁng report also identiﬁed low glucose levels in the fish and a possible “increase in the level of IGF-1 [insulin-like growth factor-1] in the AquAdvantage salmon compared to sponsor control ﬁsh.” IGF-1 is linked to cancer and early puberty and its presence in rBGH-created milk was what made the product so controversial. Government scientists have said that IGF-1 is destroyed by digestion or pasteurization, but other scientists disagree.

And there are other concerns besides the AquAdvantage salmon’s allergic potential and levels of its IGF-1. While supporters claim the fast growing fish would supply desirable omega oils, according to Michael Hansen, PhD, senior scientist with Consumers Union, “in terms of the ratio of omega-3 to omega-6 fatty acids, GE salmon fare worse than wild ﬁsh and slightly worse than farmed salmon.”

Finally, there are Jurassic Park-like questions that persist with all genetically modified organisms. The FDA brieﬁng packet discloses an unexpected and unwanted coding “rearrangement” in AquAdvantage salmon in which the original inserted genetic material has moved from “the far upstream promoter regions” to a “downstream location relative to the growth hormone coding region.” Why.

Despite its documented aberrations, the AquAdvantage salmon will likely not even be labeled is more evidence that the FDA puts industry before consumers.

The complete story of the AquAdvantage salmon is found in Martha Rosenberg’s acclaimed expose, Born With a Junk Food Deficiency (Prometheus Books, 2012).