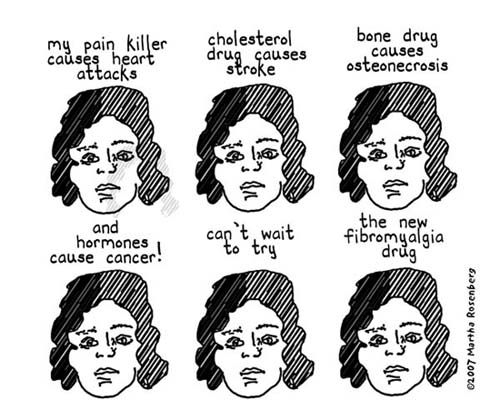 “Ma toot hurts so bad” mimicked Merck bone scientist Don Kimmel in a 2004 email to Merck health science consultant Sharon Scurato about the type of patient who was developing ONJ. Such a patient “could be an oral hog,” wrote Kimmel, then a bone scientist in Merck’s department of Molecular Endocrinology/Bone Biology and trained as a dentist—someone with pre-existing infections and periodontal disease who omits preventative care.

Newly available emails and internal Merck documents reveal the company was far from concerned or surprised when ONJ-links to Fosamax surfaced in the early 2000′s and launched elaborate spin campaigns to keep the $3 billion a year pill afloat. In fact, animal studies revealed ONJ in rats given bisphosphonates (the class of drugs Fosamax belongs to) as early as 1977, Kimmel admitted under oath in 2008.

Thousands of lawsuits have been filed on behalf of patients who say they developed ONJ after dental procedures like tooth extraction because they took Fosamax. Treating ONJ is almost impossible said dentists and oral surgeons quoted the Review-Journal in 2005, because “further surgery in an effort to correct the problem only exacerbates it, leaving the patient with even more exposed bone and even more disﬁgured,” Jaw removal, bone grafts, and even tracheostomies were reported by the News-Press in 2006. “Even short-term oral use of alendronate [Fosamax] led to ONJ in a subset of patients after certain dental procedures were performed,” read a study in the Journal of the American Dental Association in 2009.

Besides attributing ONJ to patients’ bad oral hygiene and, tautologically, their advanced years, Merck withheld crucial safety data from the American Society for Bone and Mineral Research (ASBMR) when the group sought to develop a position paper on bisphosphonate-related ONJ. Of 428 suspected ONJ cases related to Fosamax, 378 of which were highly likely to be ONJ, only 50 cases were shared with ASBMR, according to court documents. “I see the 50 with regard to the postmarketing,” admitted Thomas Bold, Merck’s director of clinical risk management and safety surveillance in 2009, upon viewing the slides Merck provided to ASBMR. “I don’t see 378 mentioned and I don’t know why that is the case,” he conceded.

Though he was prepared for questioning by Merck lawyers, he said, for “approximately 60 hours,” Don Kimmel (of the “ma toot” joke) was similarly confused under oath. He did not remember collaborating with researcher Jack Gotcher until he was shown their co-written paper. “Yes. This looks to be an experiment that Jack did,” he allowed, but, when asked “Why is your name on it?” replied, “I think assisted in it, and we talked about it.”

Kimmel, an animal research expert who served as longtime Director of Animal Experimentation at Merck, also disagreed with colleague Gotcher’s conclusions in a PowerPoint presentation that bisphosphonate drugs “caused ONJ” in rats. Despite decades of his own related research in rats, Kimmel said, “It’s not proven that a rat is a reliable model of producing ONJ,” and “Dr. Gotcher has a viewpoint.” Nor was Kimmel certain about the applicability of dogs and rabbits to bisphosphonate effects in humans. There’s no loss of bone in dogs on the drugs, he lamented, “even when you take their ovaries out” and Merck is repeating already completed human experiments on the drugs on rabbits to build lacking “confidence in the rabbit as an animal model.”

Kimmel was less doubtful about the noxiousness of the ONJ condition itself and admitted to writing “Ooooh! Ickkkkk! Yuckkk! It’s ONJ,” on an informational slide he prepared about ONJ. But when asked if “That’s a fair way to describe ONJ, it’s icky, yucky, it’s something you don’t want to have, right?” Kimmel responded, “The outcome of ONJ is a lot different than the early cases.”

The complete story of bisphosphonate-linked ONJ is found in Martha Rosenberg’s acclaimed expose, “Born With a Junk Food Deficiency: How Flaks, Quacks and Hacks Pimp The Public Health” (Prometheus Books, 2012).

One Response to Merck emails ridicule patients harmed by drug