The International Monetary Fund (IMF) made an embarrassing error just two days before the start of the Libyan people’s revolution on February 17. This quote from an IMF country study appeared in a previous article: “The outlook for Libya’s economy remains favorable.” IMF Feb 15 This advice was 180 degrees off target. The Libyan economy has ceased functioning as protests and popular demands imploded the Gaddafi regime.

Further investigation unearthed a specific pattern of positive IMF endorsements for each of the nations experiencing popular uprisings that are sweeping the region. When the IMF blesses a nation’s progress for conforming to the economic policies underlying globalism, watch out! There is a popular rebellion in the wings.

The Allied powers created the IMF in 1944 as a “cooperative institution that seeks to maintain an orderly system of payments and receipts between nations.” The original entity was known as the Bretton Woods Agreement. The US dollar, tied to gold, became the standard for international trade. The agreement claimed to promote open global trade and economic liberalization through IMF loans to nations to increase the volume of global trade, i.e. globalization. The US has led the organization since its inception. In 1971, President Nixon removed the gold standard for the US dollar. Shortly after Nixon’s move, members developed their own exchange arrangements in the context of IMF goals.

There are numerous criticisms of the IMF on the left and right. The continued impoverishment of participating nations that were supposed to grow economically is the baseline critique. IMF does not seem to help much, unless one considers debt-laden governments a sign of progress. In essence, the loan program moves in to shore up nations devastated in the various shocks to the world economy from oil price increases, financial crises, etc., and, ironically, problems from following IMF recommendations. For the masses, the IMF is like the corner man for beaten down fighter who refuses to throw in the towel. For the autocrats in charge, it is a regenerating pot of cash at the end of the rainbow.

IMF scorecard in North Africa and the Middle East

IMF was wrong on Libya, as we have seen. On the date of their report, February 15, “the outlook for Libya’s economy” was anything but favorable. The nation was two days away from the current people’s revolution, which devastated the economy.

IMF said the following of Egypt before its revolution:

“The government’s FY2009/10 fiscal deficit target of 8.4 percent of GDP is expected to be met on the strength of careful fiscal management. If revenues perform better than expected as a result of strengthening activity, it would be prudent to save these.” February 10, 2010

As though torture, political suppression, severe anti union policies, and the mass of people seeing their income buy less and less made no difference, IMF was bullish on Egypt.

IMF was also high on Tunisia just before that revolution took place:

“Executive Directors noted that Tunisia weathered the global crisis well, largely reflecting its sound macroeconomic management and structural reforms over the last decade, and timely policy responses since the onset of the crisis. . . . Amid continued uncertainties for the external environment, they [IMF Directors] emphasized the need to maintain macroeconomic policies that support the recovery and to intensify structural reforms that would enhance competitiveness, diversify exports, and promote job creation.” September 1, 2010

Weeks before the great Tunisian uprising, IMF says that Tunisia came through the global recession and emerged on a sound footing. This point was missed by the Tunisian people. Inspired by a street vendor who chose to self-immolate rather than endure any more of the regular indignities by the state bureaucracy, Tunisians went to the streets demanding the removal of the government. They chased off their dictator but resistance remains as strong for those who oppose reform. The “structural reforms that would enhance competitiveness” were not for the majority. They benefited the despot, former dictator Ben Ali, and his cronies.

Yemen, on the southern border of Saudi Arabia, is the perfect client state for IMF assistance. Due to a decline in oil revenues, the nation faced serious economic challenges. IMF moved in to offer advice, which entailed reducing fuel subsidies; tightening tax code enforcement; and, “containing nonessential current expenditures.”

The reductions in fuel subsidies were substantial, 10%, angering the people. The increases for social support were modest. IMF got it all wrong when it concluded: “The program is off to a good start. A number of important policy measures have been implemented to address fiscal imbalances.” IMF, August 19, 2010

Yemen has seen massive anti regime demonstrations over the past two weeks. The most prominent demand is the removal of the autocrat, Ali Abdullah Saleh, who has ruled since 1978. Since the initial protests at the end of January, the anti regime movement has backed the long-standing ruler into a corner. Abdullah Saleh is now losing support from his remaining stronghold and may be gone soon.

IMF sees the Oman as a very safe bet for success due to “sound macroeconomic management.” Long one of the favored developing nations, the IMF said the main risk to Oman was from falling oil prices, IMF said. Oil prices were up significantly when major protests broke out in this model economy.

On March 1, Aljazeera reported that, “The demonstration was organised by intellectuals and non-governmental associations and protesters held placards reading ‘We want jobs,’ ‘We want higher salaries’ and ‘We want freedom of the press.’”

The revered Oman represents another IMF predictive failure, as does Bahrain, the site of a resistance movement that faced down murderous attacks. Prior to the protests, IMF extolled, “the Bahraini authorities’ prudent macroeconomic policies and strong financial oversight.” 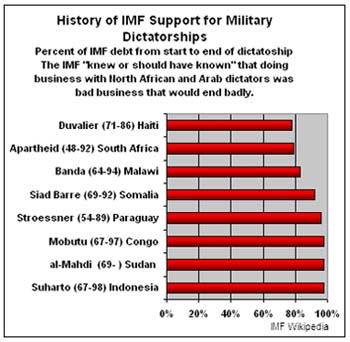 IMF has a long history with dictators. This graph shows the excessive borrowing by despots in small and large nations from 1948 on. The IMF knew or should have known that doing business with North African and Arab dictators was bad business and would end badly.

Tunisia, Libya, Egypt, Yemen, Oman, and Bahrain had two things in common prior to the popular uprisings. They aligned with the fiscal and economic policies of the IMF and autocrats were in charge. If you are an autocrat, dictator, strongman, in charge of a nation of any size, you have to love the IMF.

They come into the country and establish financial criteria. These strictures don’t harm you, the dictator, one bit. You get loans and favorable trade agreements. Cooperation with IMF globalization is the ticket to a series of big paydays. You get current and future rake offs for you and your cronies, and nobody at IFM complains.

Then you get to buy weapons and other goods that are totally useless to your citizens. That turns into another source of payoffs and enhanced personal income.

Your people live in a state of existential dread if you add unfulfilled dreams to the material deprivation. But you’re looking good to IMF and, as a result, your personal fortune grows. Just play ball with the big boys and it’s a never ending holiday for you and your friends.

How much more of this IMF success package can the people of the world endure?

N.B. Two days after this article was published including the IMF Feb 15 statement that, “The outlook for Libya’s economy remains favorable, “ an IMF representative admitted that the sustainability of macroeconomic gains required a more inclusive participation by a nation’s population. One wonders when IMF will issue an apology to all of those who have suffered under the dictators IMF has propped up over the past several decades?

This article may be reproduced entirely or in part with attribution of authorship and a link to this article.

Michael Collins is a writer in the DC area who researches and comments on the corruptions of the new millennium. His articles focus on the financial manipulations of The Money Party, the abuse of power by government, and features on elections and election fraud. His articles can be found here. His website is called The Money Party.

This entry was posted in Finance. Bookmark the permalink.

2 Responses to IMF rates up dictatorships just before revolutions