The blockbuster pill profit party is over for Big Pharma. Bestselling pills like Lipitor, Seroquel, Zyprexa, Singular and Concerta have gone off patent with nothing new in the product pipeline. But Pharma isn’t going to deliver disappointing earnings to Wall Street just because it has few new drugs coming online and has failed at its very purpose. It is recycling old for brand new uses.

Now that Pharma’s succeeded in getting five million children and four to eight million adults diagnosed with ADHD, it’s looking for new markets for the drugs. One new use for Ritalin (methylphenidate), the grandfather of ADHD drugs, could be for eating disorders. Researchers say a woman who suffered from bulimia nervosa, bipolar I disorder, cocaine and alcohol dependence, attention-deficit hyperactivity disorder and panic disorder “achieved a sustained (>1 year) remission” when methylphenidate was added to her other drugs.

Then there’s pregnant women. A new paper suggests that taking away a women’s methylphenidate during pregnancy may “may present a significant risk” and that, “In all cases, children developed normally and no adverse effects were reported,” though they were exposed in utero. Yes, kids can be given ADHD meds at even younger ages—as fetuses.

Pharma is also looking at the elderly as a new market for ADHD drugs. Methylphenidate may “improve gait function in older adults,” researchers wrote recently. And a major clinical trial sponsored by Johns Hopkins Bloomberg School of Public Health is underway to see if methylphenidate can reduce apathy in Alzheimer patients. Of course many Alzheimer patients don’t have apathy but agitation and aggression; they will be excluded.

Women over 40 might feel a rush of medical justice over the big push to treat men’s “Low T,” a recent “disease” now aggressively marketed, with replacement testosterone. For over 50 years, medical journals were relentless in telling women they were “outliving their ovaries” (a real ad) and the only hope to keep their looks, their husbands and their sanity was hormone replacement. Now men are hearing that their decreased sex drive and energy, reduced muscle and growing fat put them in the same position. Missing in both marketing campaigns is the fact that people don’t get old because they lose hormones; they lose hormones because they get old.

The male HRT products are not without their risks. They can worsen benign prostate problems, heart failure, sleep apnea, cause liver toxicity and possibly stimulate prostate cancer though it remains a theoretical risk. Injected testosterone has been associated with embolisms and extreme allergic reactions (anaphylaxis) both of which can be fatal. Men who take Propecia for hair loss can especially have low testosterone, which may not be reversible, because it reduces an enzyme involved in testosterone synthesis.

Calling alcoholics and addicts mentally ill and in need of vaccines

One of the few good things about alcoholism and drug addiction is they can be treated for free. Twelve-step programs like Alcoholics Anonymous use peer support instead of drugs, trained personnel or insurance—and they work. It’s no surprise that the millions of people recovering without Pharma’s help are its latest target as it tries to shore up revenues. Pharma is increasingly pressuring rehab facilities and doctors to add a mental illness diagnoses to recovering patients to sell expensive pills. Ka-ching!

Worse, Nora Volkow, the head of the National Institute on Drug Abuse, is conducting cruel experiments on primates to develop a vaccine for alcoholic or addicts. Is there an alcoholic or addict in the world who would take such a vaccine? Doesn’t she know that drinking and drugging are fun (until they aren’t) and that no one wants to quit before the party’s over? Doesn’t she know that when drinking and drugging cease to be fun, a thing called denial kicks in and alcoholics and addicts still won’t take her vaccine?

These alcoholic/addict vaccines will be marketed for people “at risk” of addiction on the basis of their family histories and brain scans which sounds a little, well, non-voluntary. Marketing early aggressive treatment for diseases people don’t even have yet (“pre-osteoporosis,” “pre-diabetes,” “pre-asthma” and “pre”-mental illness) is a foolproof business model for Pharma because people will never know if they even needed the drugs—or need them now. 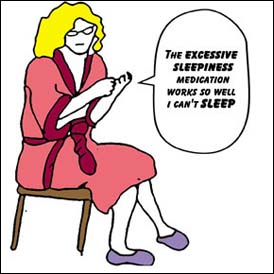 Insomnia has been a goldmine to Big Pharma. To goose the insomnia market, Pharma has created subcategories of insomnia—chronic, acute, transient, initial, delayed-onset and middle-of-the-night as well as early-morning wakening non-restful sleep. Your insomnia is as unique as you are! It is also no coincidence that “wakefulness” medications cause insomnia and insomnia drugs, because of their hangover, create a market for wakefulness drugs.

Now Pharma is announcing that insomnia is actually a “risk” factor for depression and “that treating insomnia can help treat depression.” The American Psychiatric Association’s new Diagnostic and Statistical Manual (DSM-5) due in May also newly pathologizes sleep. Considered the Bible of psychiatric drug treatments that end up being funded by insurers, the latest DSM has revised the way insomnia is diagnosed and classified. “If sleep disturbance is persistent and impairs daytime functioning, then it should be recognized and treated,” write authors in a paper in the December issue of the Journal of Clinical Psychiatry.

Rheumatoid arthritis, psoriatic arthritis, ankylosing spondylitis and plaque psoriasis are rare disorders, but you wouldn’t know it from Pharma’s latest marketing efforts. The autoimmune conditions are increasingly treated with genetically engineered, injected drugs like Humira, Remicide, Enbrel and Cimzia which can make Pharma $20,000 per year per patient. No wonder a recent ad campaign tries to convince people with back pain “that doesn’t go away” that they really have ankylosing spondylitis. No wonder “RA” (rheumatoid arthritis) ads are everywhere and ads for plaque psoriasis drugs promise “clearer skin” like beauty creams. In Chicago, ads for the expensive, injected drugs have appeared in college newspapers, as if they are for the general population instead of people with uncommon diseases.

Because such drugs, called TNF blockers, suppress the immune system, they invite super bacterial and fungal infections, herpes and rare cancers, the latter especially in children. They are linked to increasing hospitalizations, extreme allergic reactions and cardiovascular events, all of which Pharma tries to downplay. TNF blockers are also marketed for thinning bones and asthma, conditions that would rarely warrant their risks. Xolair, marketed for asthma despite its FDA warnings. has recently gotten buzz as a great treatment for chronic itch.

The seizure drug Neurontin (gabapentin) has not been Pharma’s finest hour. A division of Pfizer Inc., pleaded guilty in 2008 to illegally promoting it for bipolar disorder, pain, migraine headaches, and drug and alcohol withdrawal when it was only approved for postherpetic neuralgia, pain after shingles and epilepsy, paying $430 million. Oops. Pﬁzer actually promoted the illegal uses while under probation for illegal activities related to Lipitor and later promoted illegal uses for a similar drug, Lyrica, while under the Neurontin agreement!

To sell Neurontin, Pfizer’s Parke-Davis launched an elaborate “publication plan” to get marketing papers disguised as science in medical journals. In just three years, Parke-Davis planted 13 ghostwritten articles in medical journals promoting off-label uses for Neurontin, including a supplement to the prestigious Cleveland Clinic Journal of Medicine that Parke-Davis made into 43,000 reprints for its reps to disseminate.

And there was more duplicity. In 2011, three years after its $430 million settlement, Pfizer’s STEPS trial (“Study of Neurontin: Titrate to Effect, Proﬁle of Safety”) was reported to also be a con and not a scientific study; it was a sales tool created to inspire the 772 investigators participating in the trail to personally prescribe Neurontin. Recently, the new uses of Neurontin for chronic cough, menopause and insomnia are appearing in scientific literature. Why does no one seem to believe them?

Martha Rosenberg is an investigative health reporter and the author of “Born With a Junk Food Deficiency: How Flaks, Quacks and Hacks Pimp The Public Health” (Prometheus Books).