Tales in a Kabul restaurant

KABUL, May 21, 2013—Since 2009, Voices for Creative Nonviolence has maintained a grim record we call the “The Afghan Atrocities Update” which gives the dates, locations, numbers and names of Afghan civilians killed by NATO forces. Even with details culled from news reports, these data can’t help but merge into one large statistic, something about terrible pain that’s worth caring about but that is happening very far away.

It’s one thing to chronicle sparse details about these U.S. led NATO attacks. It’s quite another to sit across from Afghan men as they try, having broken down in tears, to regain sufficient composure to finish telling us their stories. Last night, at a restaurant in Kabul, I and two friends from the Afghan Peace Volunteers met with five Pashtun men from Afghanistan’s northern and eastern provinces. The men had agreed to tell us about their experiences living in areas affected by regular drone attacks, aerial bombings and night raids. Each of them noted that they also fear Taliban threats and attacks. “What can we do,” they asked, “when both sides are targeting us?”

Jamaludeen, an emergency medical responder from Jalalabad, is a large man, with a serious yet kindly demeanor. He began our conversation by saying that he simply doesn’t understand how one human being can inflict so much harm on another. Last winter, NATO forces fired on his cousin, Rafiqullah, age 30, who was studying to be a pediatrics specialist.

“A suicide bomber had apparently blown himself up near the airport. My cousin and two other men were riding in a car on a road leading to the airport. It was 6:15 AM. When they’d realized that NATO helicopters and tanks were firing missiles, they had left their car and huddled on the roadside, but they were easily seen. A missile exploded near them, seriously wounding Rafiqullah and another passenger, while killing their driver, Hayatullah.”

Hayatullah, our friend told us, was an older man, about 45 years old, who left behind a wife, two boys and one daughter.

Although badly wounded, Rafiqullah and his fellow passenger could still speak. A U.S. tank arrived and they began pleading with the NATO soldiers to take them to the hospital. “I am a doctor,” said Rafiqullah’s fellow passenger, a medical student named Siraj Ahmad. “Please save me!” But the soldiers handcuffed the two wounded young men and awaited a decision about what to do next. Rafiqullah died there, by the side of the road. Still handcuffed, Siraj Ahmad was taken, not to a hospital, but to the airport, perhaps to await evacuation. That was where he died. He was aged 35 and had four daughters. Rafiqullah, aged 30, leaves three small girls behind.

And Jamaludeen knows that those girls, in one sense are lucky. Four years ago, he tried to bring first aid as an early responder to a wedding party attacked by NATO forces. Only he couldn’t, because there were no survivors. Fifty-four people were killed, all of them (except for the bridegroom) women and children. “It was like hell,” said Dr. Jamaludeen. “I saw little shoes, covered with blood, along with pieces of clothing and musical instruments. It was very, very terrible to me. The NATO soldiers knew these people were not a threat.”

Kocji, who makes a living doing manual laborer, is from a village of 400 families. His story took place three weeks ago. It started with a telephoned warning that Taliban forces had entered the Surkh Rod district of Jalalabad, which is where his village is located. That day, at about 10:00 p.m., NATO forces entered his village en masse. Some soldiers landed on rooftops and slid expertly to the ground on rope ladders. When they entered homes, they would lock women and children in one room while they beat the men, shouting questions as the women and children screamed to be released.

On this raid, no one was killed, and no one was taken away. It turned out that NATO troops had acted on a false report and discovered their error quickly. False reports are a constant risk. In any village some families will feud with each other, and NATO troops can be brought into those feuds, unwittingly and very easily, and sometimes with deadly consequences. Kocji objects to NATO forces ordering attacks without first asking more questions and trying to find out whether or not the report is valid. He’d been warned of a threat from one direction, but the threats actually come from all sides. 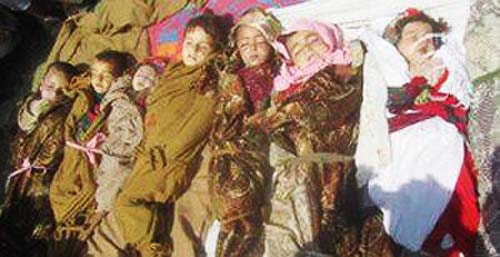 Children killed in the Kunar province, April 2013. (Photo by Namatullah Karyab for The New York Times.)

Rizwan, a student from the Pech district of the Kunar province, spoke next.

Twenty-five days ago, between 3 and 4 a.m., twelve children were collecting firewood in the mountains not far from his village. The children were between 7 and 8 years old. Rizwad actually saw the fighter plane flying overhead towards the mountains. When it reached them, it fired on the twelve children, leaving no survivors. Rizwan’s 8-year-old cousin, Nasrullah, a schoolboy in the third grade, was among the dead that morning.

The twelve children belonged to eight families from the same village. When the villagers found the bloodied and dismembered bodies of their children, they gathered together to demand from the provincial government some reason as to why NATO forces had killed them. “It was a mistake,” they were told.

“It is impossible for the people to talk with the U.S. military,” says Rizwad. “Our own government tries to calm us down by saying they will look into the matter.”

Riazullah from Chapria Marnu spoke next. Fifteen days previously, three famers in Riazullah’s area had been working to irrigate their wheat field. It was early afternoon, about 3:30 p.m. One of the men was only eighteen—he had been married for five months. The other two farmers were in their mid-forties. Their names were Shams Ulrahman, Khadeem and Miragah, and Miragah’s two little daughters were with them.

Eleven NATO tanks arrived. One tank fired missiles which killed the three men and the two little girls. “What can we do?” asked Riazullah. “We are caught between the Taliban and the internationals. Our local government does not help us.”

The story of U.S./NATO occupation

The world doesn’t seem to ask many questions about Afghan civilians whose lives are cut short by NATO or Taliban forces. Genuinely concerned U.S. friends say they can’t really make sense of our list—news stories merge into one large abstraction, into statistics, into “collateral damage,” in a way that comparable (if much smaller and less frequent) attacks on U.S. civilians do not. People here in Afghanistan naturally don’t see themselves as a statistic; they wonder why the NATO soldiers treat civilians as battlefield foes at the slightest hint of opposition or danger; why the U.S. soldiers and drones kill unarmed suspects on anonymous tips when people around the world know suspects deserve safety and a trial, innocent until proven guilty?

“All of us keep asking why the internationals kill us,” said Jamaludeen. “One reason seems to be that they don’t differentiate between people. The soldiers fear any bearded Afghan who wears a turban and traditional clothes. But why would they kill children? It seems they have a mission. They are told to go and get the Taliban. When they go out in their planes and their tanks and their helicopters, they need to be killing, and then they can report that they have completed their mission.”

These are the stories being told here. NATO and its constituent nations may have other accounts to give of themselves, but they aren’t telling them very convincingly, or well. The stories told by bomb blasts or by shouting home-invading soldiers drown out other competing sentiments and seem to represent all that the U.S./NATO occupiers ever came here to say.

We who live in countries that support NATO, that tolerate this occupation, bear responsibility to hear the tales told by Afghans who are trapped by our war of choice. These tales are part of our history now, and this history isn’t popular in Afghanistan. It doesn’t play well when the U.S. and NATO forces state that we came here because of terrorism, because of a toll in lost civilian lives already exceeded in Afghanistan during just the first three months of a decade-long war—that we came in pious concern over precious stories that should not be cut short.

Kathy Kelly, (kathy@vcnv.org), co-coordinates Voices for Creative Nonviolence www.vcnv.org. She is living in Kabul for the month of May as a guest of the Afghan Peace Volunteers (ourjourneytosmile.com/blog).